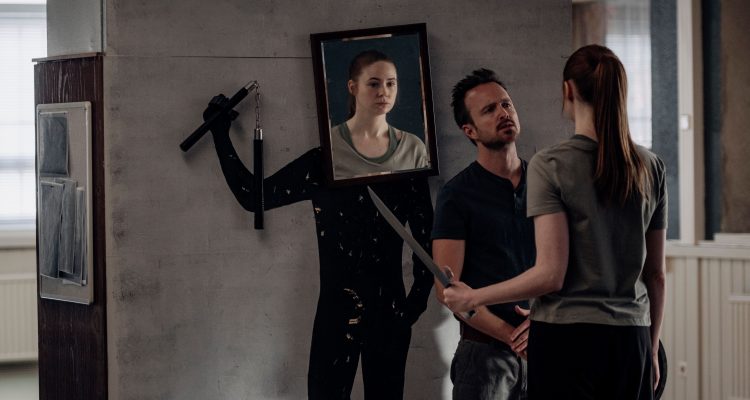 Give thanks to writer / director Riley Sterns for delivering one of the most frustrating and aggravating movies in a long time.

A dying woman is cloned with the intent to take over her life, but later on she’s forced to face her clone in a duel to the death.

Sarah (Karen Gillan) has some pretty severe emotional issues. She walks through life in a depressed funk, a haze where self awareness hasn’t quite seeped in, and her relationships with those closest to her – her boyfriend (played by Beulah Koale) and her mother – are strained to say the least. There’s no real love or passion with Sarah: She seems incapable of a fully developed grasp of life itself, and so when she’s told that she has an incurable disease and will die with utmost certainty in the near future, she takes the news in stride, and decides to “gift” her two loved ones with an expensive option – to have herself cloned and have the clone resume her life in a seamless way once she dies. Her clone comes out of the manufacturing lab (an hour after ordering it, which is odd and preposterous) not like a newborn baby, but like a chipper, sprightlier version of herself with lots of questions and a forthright attitude that Sarah’s boyfriend embraces and cuddles to right away. Where Sarah’s vocal intonations are flat and depressed, “Other Sarah” responds with a hint of optimism and anticipation. Needless to say, Sarah loses her boyfriend and her mother to “Other Sarah” in terms of their love and affections, and Sarah becomes an outcast well before her expiration date. A year passes and Sarah is informed that her incurable disease has gone into complete remission, which poses a massive problem: What will become of her and her clone? Her boyfriend doesn’t want her back, and neither does her mother; they want “Other Sarah,” and since “Other Sarah” refuses to be decommissioned, the default setting for such a rare situation is that both the original and the clone must duel to the death, with the prize being life for the victor. Sarah and her clone are given one year to prepare for the duel, and Sarah takes lessons with a low rent trainer (played by Aaron Paul) who teaches her how to kill without mercy. But there’s a wrinkle in the entire endeavor … “Other Sarah” wants to live just as badly as Sarah does, which means she’s ready to kill the original and completely erase her from existence.

Set in a bizarre, science fictional reality about ten minutes into the future, Dual has a very intriguing concept and hook, but it’s completely undone by the weird, robotic way in which Gillan’s character is written and performed. There’s a strange, fractured approach to the way the whole cloning plot is presented and delivered, and when we meet other clones in the film (there’s a scene in a clone-killer survivor’s support group), we realize that the movie treats clones and originals as odd anomalies to life and reality, but since we’re asked to sympathize with them, it would’ve been extremely helpful if these characters actually seemed human. Gillan behaves like an alien the whole time, and so it’s a difficult thing to shake off when we spend so much time with this unlikable, unrelatable person. And adding insult to injury, the entire film builds up to a climax that never comes, and so it was impossible not to feel cheated by this deceptive (and deceptively marketed) movie. There is no duel the way you hope there will be (there’s a battle of wills, not weapons), and when the movie ended, I was ready to throw my remote at my TV. Give thanks to writer / director Riley Sterns for delivering one of the most frustrating and aggravating movies in a long time.

RLJE has just released a DVD and a Blu-ray of Dual, and it comes with an audio commentary and a making-of feature on the disc. 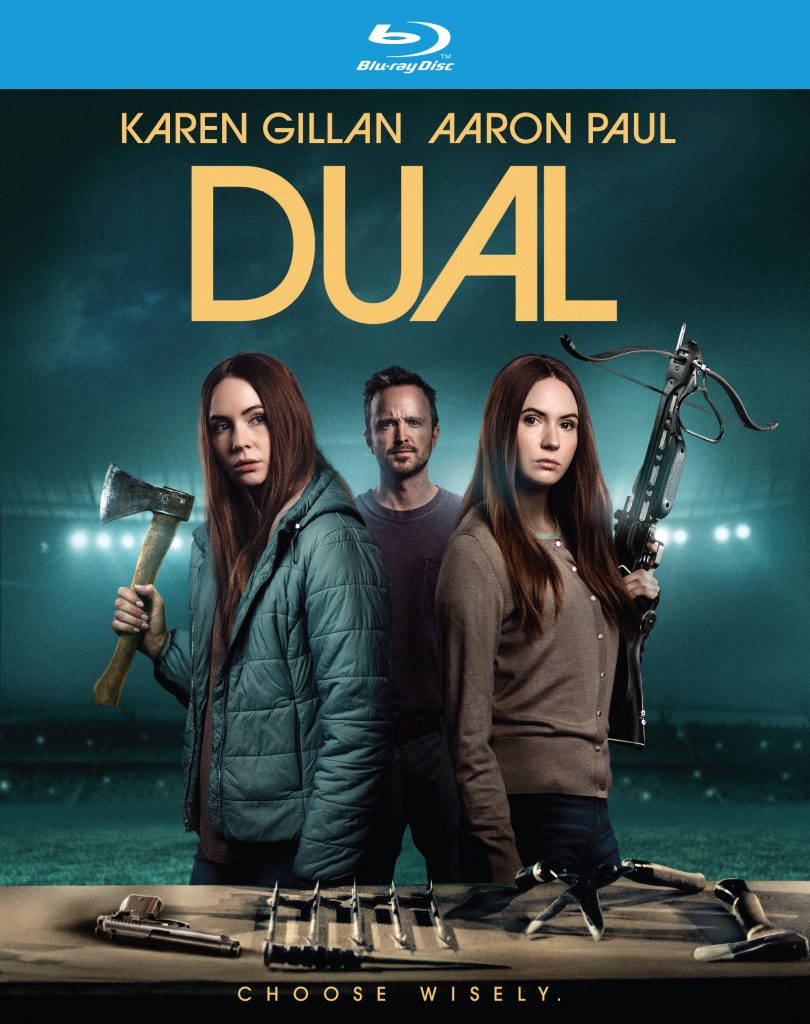