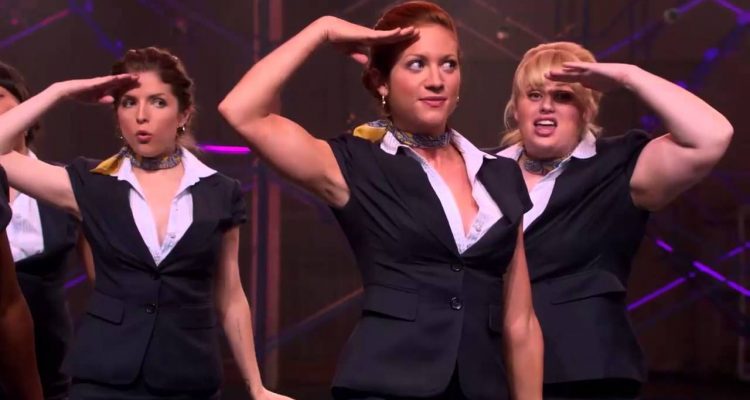 The Pitch Perfect Trilogy: A Retrospective

If you had bet me a million dollars a year ago that I would be doing a retrospective of the Pitch Perfect series, I would have been convinced that you were out of your mind.  I also would have lost the bet. Now don’t get me wrong, I have nothing against musicals or whatever the hell you consider the Pitch Perfect movies.  Rom-Com’s? Coming of age stories?  Chick flicks?  Nope, these movies have their demographic – and I’m usually not in it.  Thanks to Netflix, though, I was recently introduced to Becca, Fat Amy and the rest of the Bellas.  What are my thoughts?  Read on… 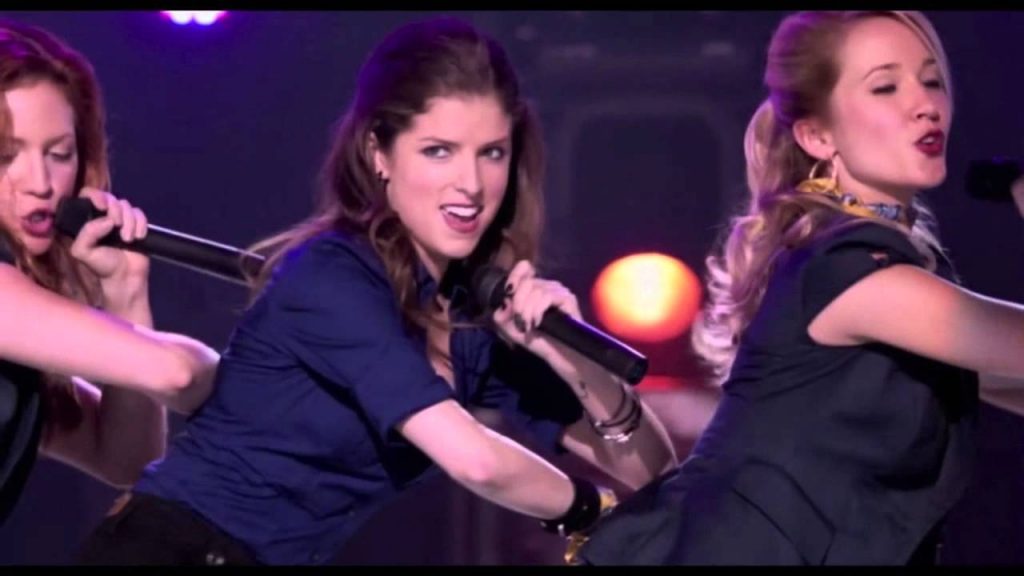 Review: First off, Pitch Perfect is not the sort of story that you haven’t seen before. The young upstart group is dysfunctional, can’t get their act together, and seems hopelessly overmatched against the far better competition. Luckily, the plucky newcomer who doesn’t fit in but oozes talent manages to convince the group to change their ways, resulting in a winning formula. Sound familiar?  Yeah, it’s every uplifting movie you’ve probably ever seen.  It’s also extremely silly – some of the dialogue is so weird (“You’re one of the a cappella girls.  I’m one of those a cappella boys, and we’re going to have aca-children…”  Um…yeah, who wrote that?

That being said, the movie has it’s charm.  The riff-off is particularly memorable and does a great job of showing off the talent of all the performers.  The end performance is also great and features a snippet of my favourite song covered, Simple Minds’ “Don’t You (Forget About Me),” which also is fitting as it was the end song for The Breakfast Club, which the movie makes numerous mentions to (and shares the theme of disparate members from different walks of society banding together for a common goal).  I enjoyed Anna Kendrick’s performance, even though her character is a bit cliché, she definitely has a likeability that makes her endearing. Skylar Astin is perfect as the love interest, not coming across as a douche or a whiner, but a generally decent guy. I found myself rooting for Kendrick and Astin’s characters to wind up together in the end.

Then, there’s Rebel Wilson.  I am not generally a Rebel Wilson fan, not that I dislike her or anything, but I don’t generally find her all that funny and she sometimes suffers from a complex a lot of comedic actors have these days: the “I-think-I’m-funny-no-matter-what-I-do” mentality. I do have to admit though, this movie definitely showcased her talents outside of comedy (she’s a great singer), and I did not find her all that annoying.  Even the “villains” of the movie, the Treblemakers, I didn’t find all that annoying, even Adam DeVine (who was too ludicrous to take seriously).

Overall, Pitch Perfect was a fun time, with some great set pieces to show the singing and dancing talents of the cast, and a familiar story that still works. 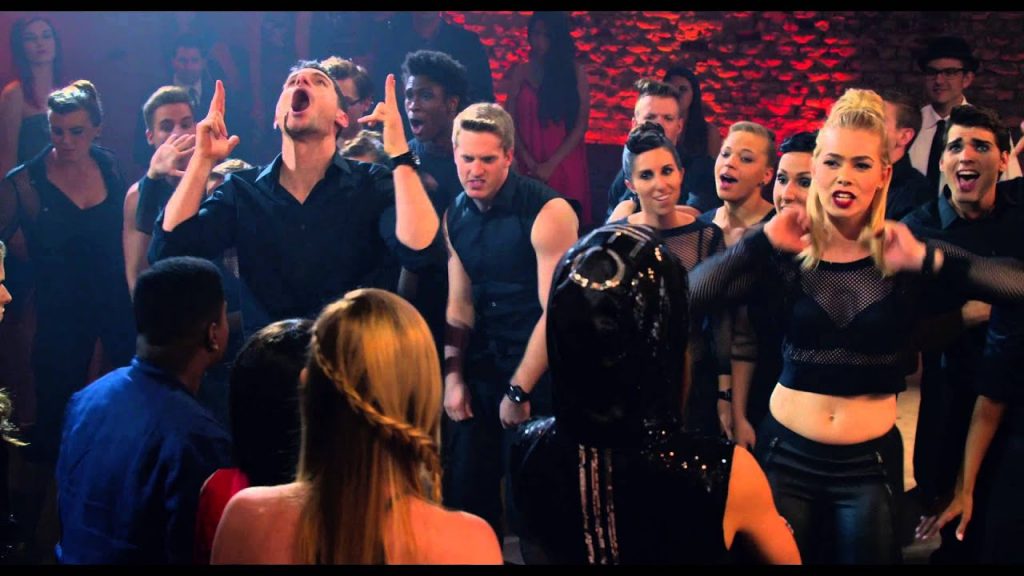 Plot: The Bardem Bellas try and regain their lost reputation by defeating Das Sound Machine, a  German a cappella group, at the World Finals.

Review: You could make the argument that Pitch Perfect 2 is a little too derivative of the first film, and I would give that to you.  I find nowadays, I more and more dislike this habit in stories of having a group come together, overcome adversity and then seemingly overnight, become incompetent and have to re-find their mojo to be winners again.  It’s hard for me to believe that a team that works hard to be champions would suddenly lose it; however, that’s exactly what happens in this film.  Throw in the same structure (riff-off where they lose, and then an awesome show where they take the crown), and you might as well have had the same script from the first movie, just scribble out some of the names and write in new ones.

The real problem though is that even though the “good guys” win at the end of this one (spoilers if, you know, you’ve never seen a movie before in your life), they really didn’t deserve to win: the opponents, Das Sound Machine were that good.  In fact, Das Sound Machine is the best thing in any of these movies.  The way they synchronized their movements and the production values of their performances destroyed anything the Bellas did – however, as this is a movie, the Bellas won. I suspect if this were done in real life (and oh, how things would change if it did), we might have had a different outcome.  In a way, it’s a shame the movie goes for sentimentalism, instead of telling the truth.

Which isn’t to say Pitch Perfect 2 isn’t enjoyable.  Most of the cast is back, and the movie ramps up the absurd, especially with the two commentators, played by John Michael Higgins and Elizabeth Banks.  Higgins especially says so many politically incorrect lines in the movie, it made me wonder how people weren’t screaming for his head.  Then again, this movie came out four years ago, before the planet got “woke” and decided every single thing on planet Earth was offensive – probably including this review. Regardless, some of the lines that came out of Higgins’ mouth made me laugh out loud, generally because of shock, as there’s no way he would have got away with those lines in today’s world. 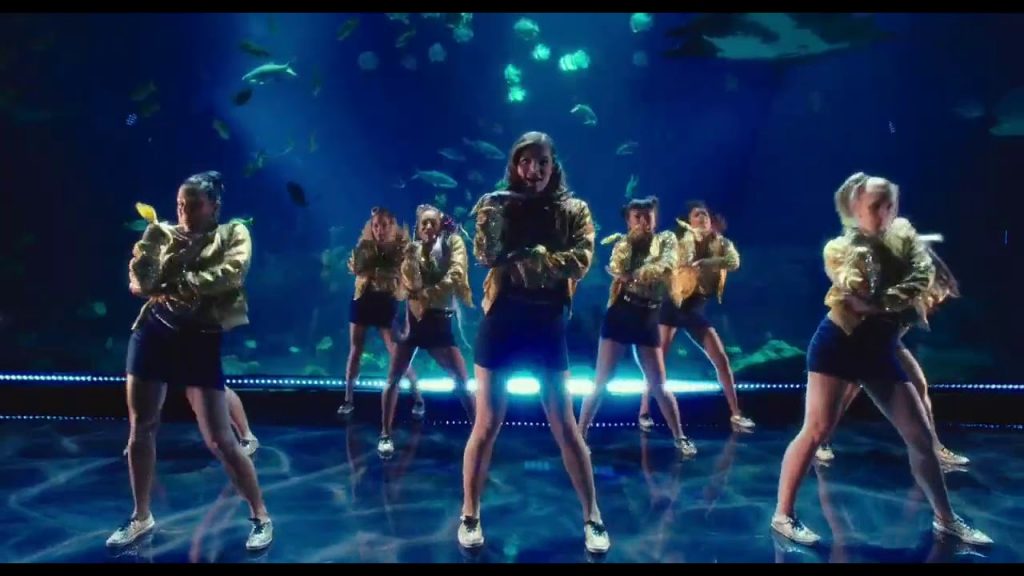 Plot: As the Bellas struggle to make it in the “real world,” Fat Amy’s dad re-enters her life, and the group embarks on an overseas USO tour.

Review: If you thought that parts 1 and 2 of the Pitch Perfect series were far-fetched, wait’ll you get a load of part 3.  Whoo-boy.  Where to begin? I think the most bizarre part of the movie is the stuff involving Fat Amy and her dad.  Who did they pick to play her day?  John Lithgow.  Replete with an Australian accent.  Why John Lithgow, and not someone who is actually, y’know, Australian? Nary a clue.  I guess his accent is okay, but I admit I spent most of the time staring at the casting choice, as John Lithgow would have been far, far, far down the list of actors I would have chosen to play Rebel Wilson’s father. The whole plotline with him and Amy is straight out of another movie – like one of those cheesy action-comedy flicks involving Vin Diesel or the Rock and a lot of annoying tweens.  I guess it’s better here because we’re dealing with adults, but man, does the whole thing just feel so far out of place with the rest of the series.

The other big problem I have with the movie is there’s no real big signature musical part.  Oh, there’s musical numbers and whatnot, and there’s another riff-off, but it seems rather ho-hum when you compare them with the rest of the series.  It doesn’t help that the other rival groups in this one are proper bands, complete with instruments, so it’s not even a cappella performances in this one, the only group that doesn’t use props is the Bellas, so it’s just a musical, then?  I kind of get it, it’s the group graduating to the big time, actual bands use actual instruments, but it just doesn’t fit?

The casting, other than Lithgow, is fine.  Don’t get me wrong, I don’t think John does a bad performance, it’s just his presence is so out of whack with the rest of the story.  I did like the casting of Ruby Rose as the leader of the punk band rivals to the Bellas, and they got most of the cast back again (though sadly no Skyler Astin, Adam DeVine or Ben Platt, and all three of their presences are sorely missing from this movie), so that’s okay.  I also like that the movie finally didn’t cop-out and give the Bella’s another title they didn’t deserve, so at least there’s that.

Overall, this movie isn’t bad, but it’s not great and is definitely the weakest of the series.  Between the bizarre inclusion of John Lithgow’s character, the missing actors from the first two films and the lack of memorable performances, it’s doesn’t stand up to the other two.

So, what more can I say about this series?  Well, it’s definitely the best a capella trilogy I’ve ever seen – then again, it’s the only one as well.  Most of the characters are likeable, the musical numbers (except for the third one) are pretty well choreographed and the series does end somewhat satisfactorily, which is not always the case with trilogies (or should I say, rarely the case).  I guess you could do worse than sit down and check these movies out, though I would say stay away if you are allergic to musical numbers or stories that feel good, even when they don’t always make sense.