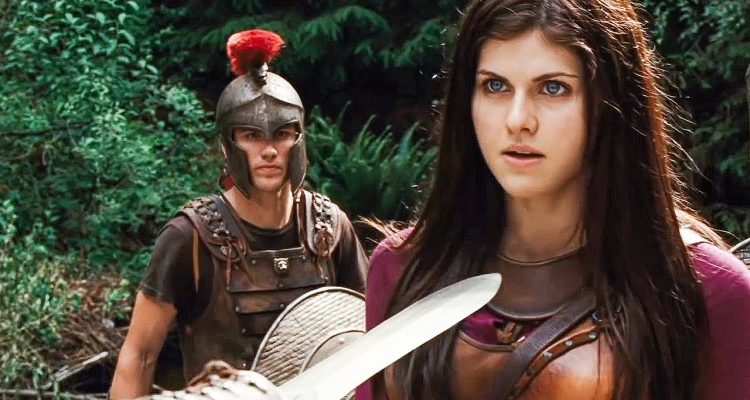 The Percy Jackson Movies: A Retrospective

I was never a Percy Jackson book guy; I just figured I wasn’t the target demographic for the novels, considering I was an adult, and the stories seemed geared towards younger people. Then the first movie came out, and I was intrigued to see it – just not intrigued enough to actually pay to see it. Seeing it later, I was hooked by the links to Greek mythology, the fantastical creatures, and the good-natured adventure that took place in the film. While the sequel, Sea of Monsters, was a letdown, not nearly as good a story as the original, it still had its moments of enchantment and wonder. So, grab your trident, avoid Medusa’s gaze, and jump on a water dragon with me as we look back at the world of Percy Jackson.

Percy Jackson and the Olympians: The Lightning Thief (2010) 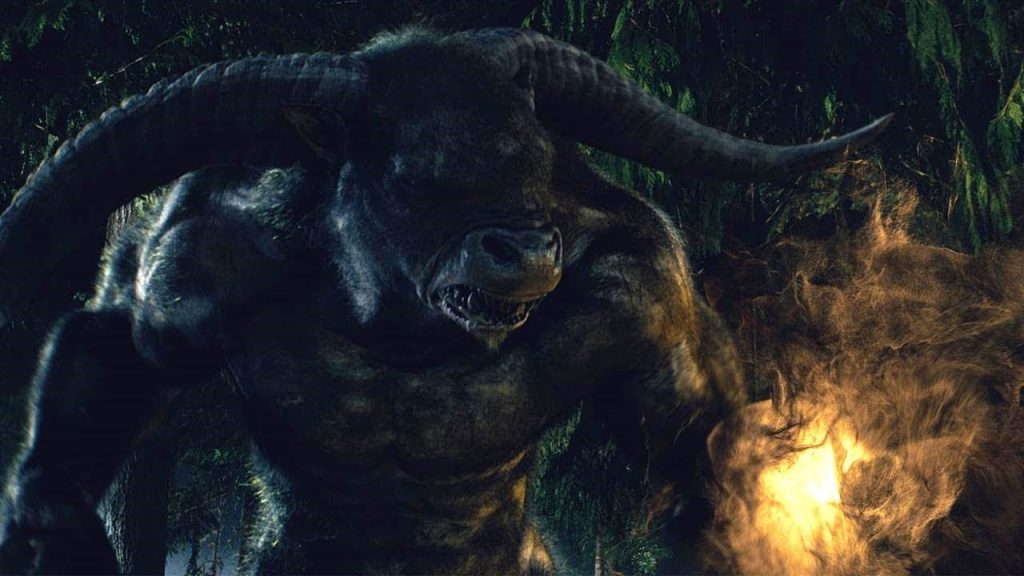 Plot: Teenager Percy Jackson discovers he’s the son of Poseidon and adventures with his friends Grover and Annabelle to free his mother from Hades and find out who stole Zeus’ thunderbolt.

Review: When I think back to the first Percy Jackson film, I think the first thing that jumps out is how smart it was to not make the main character the son of Zeus.  I mean, it could have been so easy to just have him as the kid of Zeus, wouldn’t it? He could throw lightning bolts, everyone would listen to him, I mean, he’s the heir to the throne of Olympus, no?  But, instead, they went with him as Poseidon’s son.  Not only does that mean he’d have cool water powers (which he does), but Poseidon is kind of like the forgotten god.  Zeus is Zeus, and Hades is cool just because of that whole creepy underworld thing, but Poseidon?  No one’s talking about that guy.  So kudos to the author for making him Poseidon’s son and to the filmmakers for leaving that be (what a novel idea, the filmmakers actually keeping important source material…)

Aside from this neat fact, I just dig this movie.  Logan Lerman is likeable as the titular lead, the supporting cast is likeable enough (which was a danger with the Grover character who had the potential to be annoying, but never fell into that territory).  I also really liked the fact that I couldn’t actually figure out who the Lightning Thief was; generally, in this type of movie, the mystery element is secondary to the fun and the adventure, so they just make it obvious. However, when the Lightning Thief was finally revealed, I was genuinely surprised.

But the real star of the movie is the creatures and boy howdy, there’s plenty.  They throw into the story a minotaur, a hydra, a fury, and Medusa.  All of the creatures are well-executed (my favourite is Uma Thurman’s turn as the snake-headed gorgon), and all of the scenes between the heroes and the creatures are memorable.  I have to say, though, the depiction of Hades is really unique and one of my favourite visions of what Hell would be like.  Just screaming, damned souls and their worldly belongings floating out of their reach in the air.  Brilliant.  It was so good, I could even forgive how Hades was depicted (one of the missteps in the movie, casting Steve Coogan as a rocker-esque Hades just didn’t do it for me).

I think the other great thing this movie did, is they didn’t just have the gods throughout the entire film.  It would have been convenient to have the gods just constantly steering the action (a literal God in the Machine) whenever the heroes got stuck or when the action was written into a corner, but they resisted the urge, even though they had Sean Bean as Zeus, which was brilliant casting in itself (and he didn’t die!!!), so kudos for the restraint shown in the film.

Other than that, the movie had all the stuff you would want; heroism, a good end fight, mythological weapons, etc. etc.  The film was competently shot (Chris Columbus knows what he’s doing), and after viewing the movie, I was suitably entertained.  What more do you want?

Percy Jackson and the Sea of Monsters (2013) 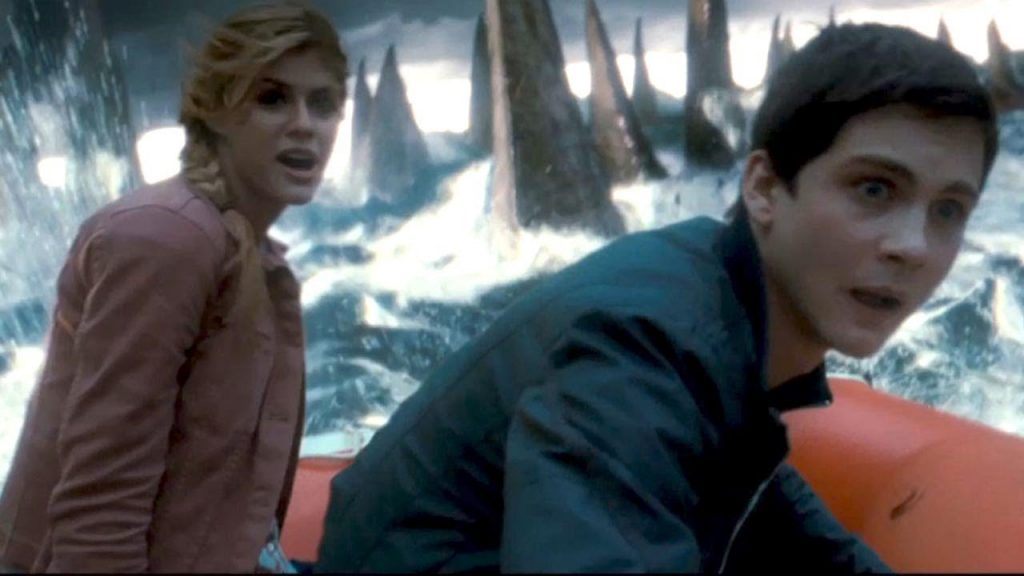 Plot: Percy and gang return, this time to retrieve the golden fleece to save a tree that protects Camp Half-Blood and in the process, stop the titan Kronos from being resurrected

As much as I enjoyed the first Percy Jackson movie, I have to say I was disappointed in the sequel.  While the main cast came back (except for Pierce Brosnan, who was replaced by Buffy the Vampire Slayer’s Anthony Stewart Head), the movie had some essential flaws in the story and characterization that hurt the movie.

My biggest complaint about this movie is the lack of consequence in the film.  At least three of the main characters (Grover, Tyson and Annabeth) encounter injuries and/or events that should have seen them dead.  Yet, in each case, the character comes back to life, usually grinning sunnily, like five minutes later.  I hate when that happens; I think the genesis of any great story is the risk that the characters you root for are put in.  If you don’t feel that there was be any consequence for the risk their actions cause, then there’s no point in investing yourself as a viewer.  In my eyes, the fact that everyone survived, even though they shouldn’t have was a bit of a fail.

Then there’s the whole thing of bringing the Luke character back.  Listen, I like Jake Abel; guy did a pretty good job in the Supernatural series as Sam and Dean’s brother in what was a true “jump-the-shark” moment.  His work in the first movie was nice, and he was convincing as the antagonist.  However, we didn’t need him back.  Why not find another guy to play the heavy?  Why recycle the character, especially when there was nothing left to say with the character?  In this movie, he’s pissed off, the same as he was in the last movie for the same reason.  Can’t we move on from that narrative?

One part that really irked me is when Tyson returned to the scene of the battle near the end.  Luke is trying to raise Kronos and has the golden fleece over the casket, which contains the titan’s remains. Percy and his group are fighting desperately to reach the casket and remove the fleece.  Then, Tyson shows up, hail and hearty after being shot with a crossbow by Luke earlier. The mission for this movie is to stop Luke from using the fleece, this is literally what the entire movie is about, and Percy sees his half-brother, who only appeared for the first time in this movie, and he stops to hug Tyson – leading to the fleece remaining on the casket and resurrect Kronos.  Fail!  Listen, I know that Kronos is going to be resurrected because otherwise, there’s no real good end battle, so it has to happen, but couldn’t it have happened less stupidly?  Oh yeah, now I remember – this movie has no consequences for the actions that take place in it, …right…never mind.

Then we get to the characters of Clarisse and Tyson.  Clarisse is the daughter of Ares and just plays such a conceited jerk through the whole movie, it’s actually great (and it’s well-played, I might add, by Leven Rambin), but then for no reason, she 180’s and now she cares about Percy and the other main cast.  She has literally spent the whole movie not caring and either sneering or being ignorant of other people’s injuries or peril, but because the movie dictates it, she becomes a member of the gang at the end. Ugh.  I have no real qualms with the character of Tyson, it’s just, he’s a cyclops, and it seems that some of the kids have problems with cyclopses (cyclopes?), so he has to wear sunglasses.  I mean, you have all sorts of creatures around Camp Half-Blood, freakin’s satyrs, centaurs, etc.  But nope, creatures with one eye are not cool.  It’s just so weird and inconsistent.

Finally, why did the movie have to end on a cliffhanger?  Were the producers really that arrogant, and they thought that they did such a bang-up job with the second film that they were guaranteed a third movie? Well, newsflash – there was no third movie, so this movie just ends feeling incomplete. Ugh – I hate that sort of thing.

Not all of the movie is bad, though.  The creatures are still cool, I really enjoyed the scene where the good guys are swallowed by Charybdis (the creature whose teeth were mistaken for shark fins in the movie’s trailer), and Clarisse has resurrected an army of dead confederate soldiers to fix a battleship in the creature’s stomach – that was neat and kind of funny. I enjoyed Nathan Fillion’s turn as Hermes (then again, I like Nathan Fillion in everything I see him in).   The Chariot of Damnation (an NYC cab) was great, as were the scenes with the Hippokampos and Polyphemus, the huge cyclops.  Hell, even the Kronos stuff was alright, he was actually a pretty badass villain that was well-conceptualized.  So, there were good points, just not enough to save the movie from its numerous misfires.

Amidst all the YA fantasy movies that have sprung up over the theatrical landscape over the last twenty or so years (thanks, Harry Potter), I think that the Percy Jackson movies are a bit of a cut above the rest of the standard teenaged magical fare. While the second film definitely has some serious flaws, both movies are undeniably fun adventures that entertain.  There’s monsters, action, cool locations, and likeable characters.  For my money, that’s all I would want.