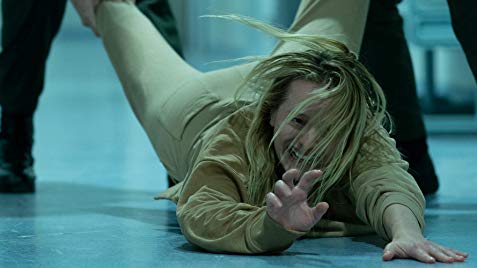 While it has a few things going for it, The Invisible Man is ultimately too ordinary and too predictable for it to stand out from other modern horror movies.

Plot: Cecilia Kass (Elisabeth Moss) suspects that her supposed dead boyfriend, Adrian Griffin, has found a way to turn himself invisible and is using this ability to terrorize her.

Review: So, let me get this out of the way right now – I thought the original Invisible Man with Claude Rains was terrific.  While the antagonist was the most human of any of the Universal “Monsters,” there was something about the Jack Griffin character and how the movie played out that was somewhat more terrifying than the traditional monster movies.  I was skeptical that they could replicate the mood and vibe of the original, and unfortunately, I turned out to be right.

That doesn’t mean that this movie is an utter loss, though.  Elisabeth Moss does a bang-up job as the protagonist, she shows she can carry a film, and the intensity of her performance should put her in the early conversation for the awards season.  Leigh Whannell is a decent director, he does some nice shots, and his pacing was pretty good.  The best sequence was a scene where the Invisible Man is trying to leave a mental institute corridor and deals with all of the security detail one-by-one, as they show up. The ending was a nice twist, and one I didn’t see coming.

That’s all very good and well, but ultimately, this movie falls into the same trap of most modern horror movies where they are predictable and just don’t have teeth.  I get that not every horror movie has to be a splatterfest, and there is something to be set for building tension, but this movie builds tension solely for the sake of building tension – the movie checked in at a little over two hours, and it didn’t need to run that long – 90 minutes would have sufficed.  There’s a drawn-out lead-up to Moss’ discovery that there is an Invisible Man (a lead-up, I might add, we didn’t need – the movie is called The Invisible Man, so I assume there is a male character in the movie who is invisible – unless the title is an allegory, which I highly doubt), and it just isn’t needed.  Nothing of note happens.  A stove burner is turned up too high.  There are multiple scenes where Moss thinks someone might be standing in a corner.  Ugh.

In the original, Jack Griffin is a killing machine.  In this movie, the Invisible Man toys with Moss for most of the film, choosing not to kill someone until the close of the second act.  It’s just a lot of investigation and search, which ultimately leads to nothing because, as I said, the audience knows THERE’S AN INVISIBLE MAN. IT’S THE TITLE OF THE MOVIE.  When the violence does finally happen, it’s okay, but not worth the wait.

Also, and this is more a commentary on horror movies in general, but I hate sound cues nowadays. There’s this one scene, seen in the trailer, which Moss’ character pours paint on the Invisible Man.  At that moment, the sound, which has been non-existent to that point, flares up.  The audience jumps, and the Invisible Man retreats – but nothing happened.  Nothing.  The Invisible Man was just standing there.  The music is telling you to be scared, but there’s absolutely no reason to do so because the Invisible Man does what he did for most of the movie – nothing.   Just stands around, causing a little mischief, and that’s it.  I hate when the music tries to tell me to be scared, but there’s absolutely no reason to be.  Jump scares are the cheapest form of horror trick and tries to usually hide the fact that the filmmaker/writer has no creativity and is just trying to keep you interested in whatever bland nonsense is unfolding in front of you.

So there you have it.  The Invisible Man is okay, but nothing more.  You’ve seen it all before.  There’s nothing particularly memorable, and it’s certainly not worth the love it’s being shown by critics (though that might be the SJW crowd, who knows).  I have a feeling in five years (or maybe one or two, who knows), no one will remember this movie was released.  So, do yourself a favour, just watch the original, and skip this one.