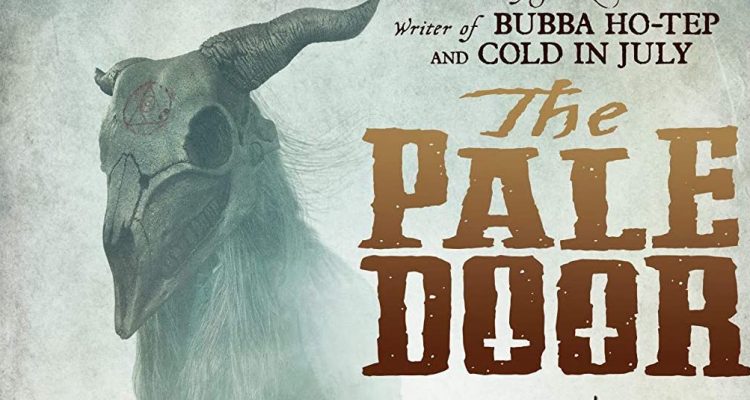 A lowbrow, lo-fi riff on From Dusk Till Dawn, the indie effort The Pale Door ain’t quite up to snuff when you compare it with the former film, but it has its moments.

A gang of outlaws wanders into a town full of witches and pays the price.

After a train robbery goes sideways, the Dalton gang saves the life of a young woman held captive in a locked crate, wondering why on earth anyone would ever box such a girl and keep her captive. The gang ain’t a bunch of pushovers: They’re cold blooded killers, willing to kill anyone in their way of a good score, but the girl perplexes them, and when she insists that her family will provide a rich reward for returning her home, they reluctantly decide to do just that. With the gang’s #2 leader Duncan (Zachary Knighton) gravely wounded, the pressure is on to get him to a doctor, and with Jake’s younger brother Jake (Devin Druid) an untested, unspoiled new member of the gang, the Dalton’s won’t hesitate to kill the girl if she turns out to be a liar. When they drift into a deserted town, with only a lively brothel in business, the madam (Melora Walters) welcomes her daughter and the men she’s brought with her. The ruddy gang is putty in the hands of the prostitutes who invite them all in for a night of pleasure. It doesn’t take long for the realization to become very apparent: the brothel is a den of witches, itching to eat the hearts of the men within, and when they come to understand that young Jake is not only a virgin, but an innocent, they go stark raving mad to collect him and use him for their rituals. But the Dalton’s won’t go down easily (the first attack is a brutal one, with several of them being slain unawares), and they retreat to a nearby church in town, where they plan their next attack …

A lowbrow, lo-fi riff on From Dusk Till Dawn, the indie effort The Pale Door ain’t quite up to snuff when you compare it with the former film, but it has its moments. There are no surprises at all to the movie, but it’s earnestly made, has some graphic kills and some gooey gore effects, but it’s still not a roundhouse kick to the genre the way it could’ve been, like say, Bone Tomahawk was. The cast works at it, though, but what it desperately needed was a jolt of style that director Aaron B. Koonz just couldn’t muster. It’s kind of a shambler of a horror film in the same way that those theme park Halloween haunt walk-throughs are: There might be some touching here and there, but no real jolts, shocks, or sense of dread. Famed author Joe R. Lansdale “Presents” the film.

Special features on the disc include “The Making of The Pale Door,” a commentary, and an editing feature. The Pale Door will be released on DVD on October 6th from RLJE Entertainment.