It is a cross between Teenage Caveman (but better) and Planet of the Apes (not even close to being better). Every star deserves to have a dream project, and this was Travolta’s.

In a post-apocalyptic world, a caveman must lead a revolution against an alien race that has invaded Earth.

Lambasted for being one of the worst movies of all time, Battlefield Earth doesn’t deserve such a beating. A lot of money and talent was wasted here, but really, come on, it’s pretty straightforward in its pace and tone, and yes, it does have some stupid dialogue and situations, but so what? It’s a fun movie – you can go with it or you can heckle it. I liked it. It takes place in the year 3000, and an unhygienic alien race called Psychlos has conquered the Earth and lain it in waste in their search for precious metals to transport back to their planet. What is left of mankind isn’t much: men have reverted back to living in caves like the cavemen they once were. When caveman Jonnie Goodboy Tyler (Barry Pepper) leaves his clan on a search for food, he is captured by the Psychlos and taken to work in mines as a slave. Since the Psychlos view men as lower beings than dogs, it is a shock to them, and particularly to Terl, the alien security chief of Earth (infamously played by John Travolta), when Tyler turns out to be pretty adept and intelligent when it comes to survival. Terl makes so many mistakes that it is absolutely no surprise when the humans take back their planet and imprison him in a cage by the end.

There is a story and a plot here somewhere, but it doesn’t particularly make a difference. What matters is that a lot of money was spent to make the movie look good, and what looks best are the wastelands that the characters walk around in. Cities look destroyed and the humans all think park statues are “gods” who brought about the world’s demise. When Pepper’s character is smartened up by a light beam used by the aliens in order for him to become a translator, he instantly becomes the catalyst for his oppressors’ destruction.

If you hate this movie, ask yourself why. It really is worth the price of a rental or purchase. Personally, I would willingly and gladly watch it again. It is a cross between Teenage Caveman (but better) and Planet of the Apes (not even close to being better). Every star deserves to have a dream project, and this was Travolta’s. If you think this is bad, check out another film Roger Christian did in the eighties: Starship. Now there’s a different breed of bad. Based on L. Ron Hubbard’s novel, which I haven’t read. Co-starring Forest Whitaker, Kim Coates, and Richard Tyson. Kelly Preston, Travolta’s late wife, has a cameo.

Mill Creek, which is turning out to be a real dark horse of a boutique label, has just released Battlefield Earth on Blu-ray for the very first time. It looks great, and if you own the old Warner Brothers DVD, this is a great time to upgrade to high definition. Newly produced features for the disc include new interviews with the director, composer, screenwriter, model maker, and also include scene-specific commentary by the production designer. 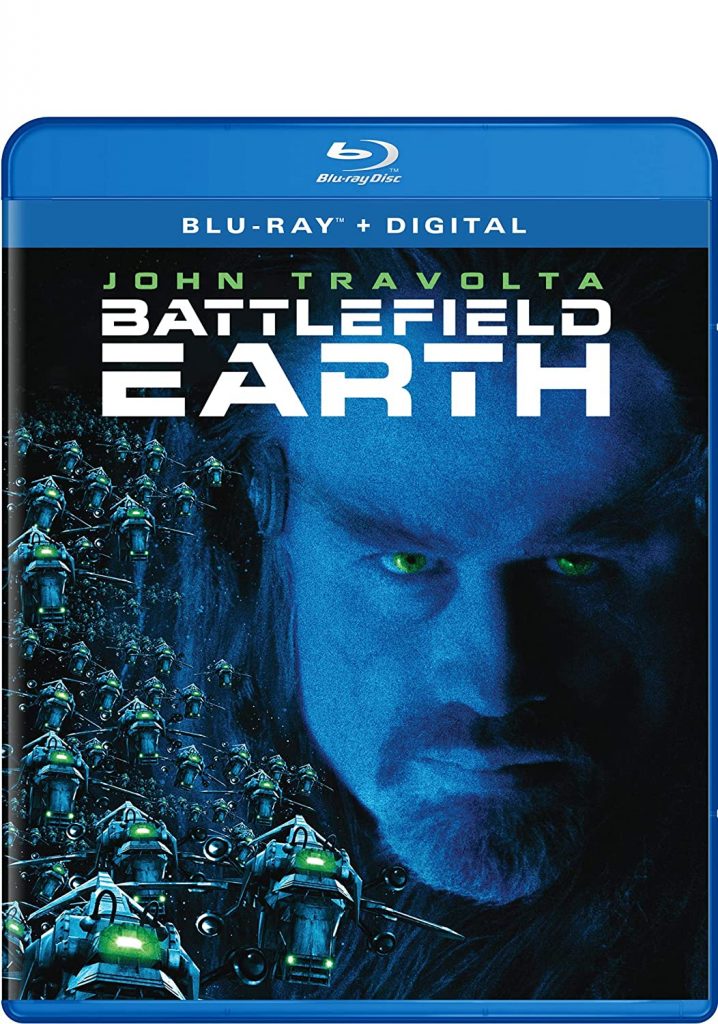