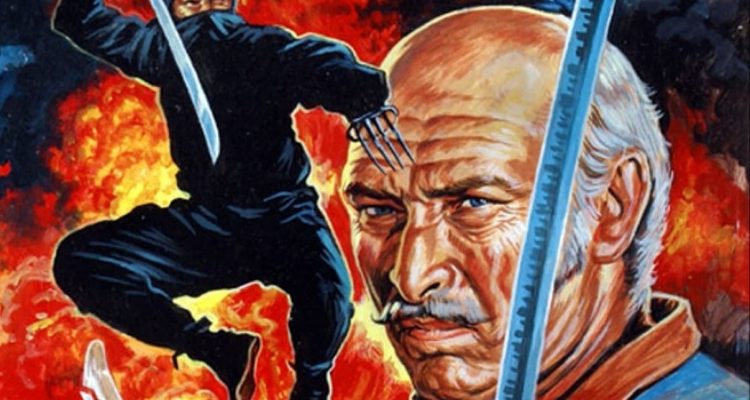 Great ninja action, courtesy of Sho Kosugi. Fans of The A-Team and MacGuyver should get a kick out of it. Ninja fans take note! Kino’s release is outstanding.

Review: This television program that lasted 12 one-hour episodes helped launch Japanese martial artist Sho Kosugi into the limelight in the United States. He plays a ninja villain named Okasa who is chasing his American master John Peter McAllister (Lee Van Cleef), a Korean war veteran and a ninjutsu expert, across the U.S. as he is searching for his long-lost daughter. McAllister has picked up a new protégée named Max (played by Timothy Van Patten), who is helping him track down his daughter. From one episode to the next McAllister and Max help pretty women out of bad situations by using their ninja skills. Occasionally, Okasa shows up and interferes with their plans, but McAllister invariably manages to get the best of Okasa.

I love shows like MacGuyver, The A-Team, and The Master. I grew up on this stuff. As corny and simplistic as they are now, I can sit back and relax and not have to worry about anything but pretty girls getting saved by ninjas. That’s what this show is all about. Watching Lee Van Cleef don a goofy looking ninja suit is about as ridiculous as things get, and when his stunt double starts doing cartwheels and dodging bullets, I just revel in the absurdity. Co-star Kosugi also served as a technical advisor and weapons craftsman, but it’s a shame he wasn’t on screen for more than a few episodes. The Trans World VHS releases were around in video stores for years, and all six of the tapes brazenly used his name and face to sell rentals, despite that he was barely in the show. His son Kane (from Revenge of the Ninja and Ninja II: Shadow of a Tear) appears in one of the last episodes. Other notable guest stars include Demi Moore and Kathleen Kinmont. Many of the episodes were directed by Gordon Hessler who would go on to direct Pray for Death, Rage of Honor, and Journey of Honor, all with Sho Kosugi. The theme music for The Master was composed by Bill Conti, and anyone who’s heard his score for For Your Eyes Only will notice the resemblance.

Previously only available on VHS from Transworld Entertainment, The Master has been resuscitated from obscurity by Kino Lorber, which is about to launch the entire series in a beautiful looking package. The presentation of the show has never looked or sounded better, and if you call yourself a fan of ninja movies and of the work of Sho Kosugi (and Lee Van Cleef, for that matter), you owe it to yourself to support this release by snapping up a copy ASAP.