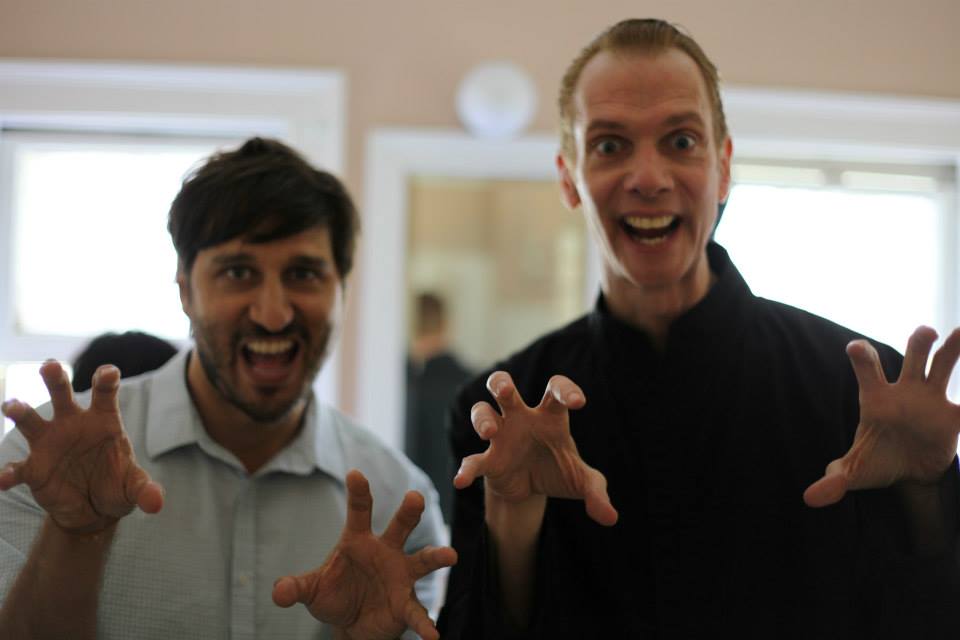 Hell’s Kitty is a love letter to writer/director/star Nicholas Tana’s cat, Angel – and it’s a silly, sweet and somewhat ghastly one at times! With cameos from a horde of horror icons, and a tone that’s both funny and frightening, it’s a throwback that’ll appeal to both cat and non-cat lovers!

Was it important to you that this not be ‘just another pet-goes-psycho horror movie’?

I think Hell’s Kitty is a whole lot more and more original than most pet-goes-psycho type horror flicks. The story creatively integrates characters from other horror films in a way that fans can relate to and appreciate. There’s also the balance of horror with comedy, and psychological suspense throughout. Finally, there is the very unique way the film came together over many years from award winning web-series, to comic book, to feature film.

Having said that, did any of those films – be it CUJO or NEW BEST FRIEND – serve as inspiration?

Most certainly Cujo served as an inspiration. As well as Pet Sematary. In fact, Dale Midkiff who portrays the dad in Pet Sematary is in Hell’s Kitty as well. The pilot episode of the original web-series, originally titled My Pussy’s Possessed, before it became Hell’s Kitty, was titled: Cujo Cat. There is an early scene, which has the Stephen King book Cujo in the background. During that scene, Nick mistakenly refers to his cat, Angel, as Cujo, in a Freudian slip. I was very inspired by the writing of Stephen King, and I’ve even become friends with Mick Garris, who has directed many of the Stephen King movie adaptations as well. I’d be curious to know what they both think of the film.

Anyone you’d read the pages to get their feedback as you went along?

I always had Denise Acosta, my producing partner, do an initial read before sending it out to others. If possible, I also like to have whoever is editing it, read the scripts before going into production. Johann Martinez who cut together a good number of the Hell’s Kitty web-series episodes, and Gustavo Sampaio, who was the main editor on the feature film, both have a solid understanding of story offered insightful comments and suggestions. There were many changes made in the edit room as well. The fact that much of Hell’s Kitty was written over a period of years, and revised as we went into production, gave mw time to see how people reacted to the writing. It was much like Charles Dickens releasing his stories in mini publications before they were compiled into a book. Only, I wouldn’t begin to compare my writing to Charles Dickens. However, the way I was able to see it released over a long period of time, incrementally, does draw an interesting comparison. It also forced me to be creative about making sense of the world, and going back to fill in any holes.

Where do you think your strengths as a writer lie?

I think I have a good sense of world building. I also have a library of past films and books in my brain, which I can call upon for inspiration. Mostly, I think it is in my ability to tell a truly original story. Most of what I see today is very predictable and formulaic. I have two feature films completed at the moment now. I can say the documentary I wrote, Sticky: A (Self) Love Story, which is currently available on Amazon (if you’ll excuse the shameless plug but us filmmakers need to eat, too), is certainly original. In a planet plagued with so much content, I believe true originality is going to be increasingly of high demand as audiences become overly familiar with it all and start to tune out.

Is there anything you had to chop from the script due to budgetary issues?

There were tons of things that we simply couldn’t do on a micro budget. Some of which I can’t reveal because it would spoil the film. Other things like peppering in tons of animated action scenes. In the original web-series, we had an animated opening, which was beautiful. However, it took too long time for the animators to get it done. They were mostly students at the time and animation couldn’t keep up with live action, not to mention it can be costly. If I am able to get Hell’s Kitty pitched as a TV series, and reshoot it all, I’d definitely like to integrate more live action mixed with animated sequences. It adds to the comic book style, and provides more crazy cat action, otherwise, impossible to pull of with a real animal.

Can you talk about your writing process? Did you knock it our rather quickly or let it simmer, in it’s own time, over a few months?

Both. I would write frantically, completing whole scenes in minutes, only to revise them later over a period of months, because I wanted to tailor the specifics of the scene to the actor playing the part. The point was to integrate iconic figures, or at least parodies of notable characters from horror, into the Hell’s Kitty universe. Depending on who agreed to participate, I would have to change the details of the character dialogue and action to match. I revised a lot over the years. We also shot as we went along. It wasn’t like I completed the script and then went into production. I started with an outline and then scripted things out over the years. This gave me time to simmer on the details. There were creative challenges that forced me to evolve my process. At one point, my actress Lisa moved to New York, so I had to lesson my roles for her in order to shoot her when she could be in L.A. As a web-show, I could always replace her. But as a feature film, it would just get too weird. You’ll notice I play with the discontinuity a bit in a scene where I look into the mirror and notice that I magically grew a beard in only a few hours. I could have worked around that one, but it would have required that I maintained the exact same facial hair all the time. After about four or five years that gets old.

The project started as a web series, I believe?

Yes, it was a web-series that we turned into a comic book, and now a feature film. Essentially, the footage from the web-series was repurposed (or as they say in the video game world: reskinned).  As we never released the last 25 minutes or so of the web-series to show the denouement, the only way to know how it ends at the moment is to watch the movie.

How does the series differ from the feature film?

The last twenty fives minutes never appear in the web-series. We decided not to launch it to bait people to watch the movie. Otherwise, nobody was going to watch the feature, if they could watch it all online. That said, we had to cut a ton to make it viewable length. Bob Canode, originally edited all the episodes altogether. The film needed to be cut down to a realistic length though and he struggled to cut stuff because he liked it all. This was challenging because we also didn’t want to lose any of the iconic actors in it. However, because we didn’t have much of a budget, I couldn’t afford to have those actors on set for more than a day, so I couldn’t give them major parts. Try editing a movie down to 98 minutes that is more like 224 minutes, without cutting any of the characters or scenes? This was truly a creative challenge. We happened to lose Connie Marie Brazelton (The People Under The Stairs) who appears in the web-series. Turning a web-series into a feature film was a Herculean effort for whoever would take on the challenge. To accomplish this, I relied on Emmy Award winning editor, Gustavo Sampaio. I had worked with Gus a decade earlier as an Associate Director at ESPN; even wrote a feature length script for him in the past. He loved what I had been doing with the series, and had edited a few of the earlier episodes, so he was familiar with the direction and tone. Johann Martinez, who edited my first feature length documentary, also contributed tremendously to Hell’s Kitty. Outside of Gustavo, he edited the majority of the episodes from the series, and Gustavo leveraged much of his work by making the feature. There were a host of other editors who were instrumental as well. This was truly a unique film made in a very original way.

The tone mightn’t be what people are expecting, is that fair to say?

For those expecting a typical horror story, they won’t get it with Hell’s Kitty. The tone of Hell’s Kitty is darkly suspenseful, twistedly comedic, and absurdly ironic. It’s been described as Twin Peaks meets Rocky Horror Picture Show, with a little Grumpy Cat tossed in. I’d say there are elements of Drag Me To Hell in it as well because Sam Raimi was an inspiration. The tone contributes to the uniqueness of the movie. The film is part horror, suspense, twisted love story; even grindhouse cinema. I wanted to create something that we had not seen before by combining elements that we have all seen. The film is my humble tribute to the horror genre. I believe that it stands on its own as the bastard step child, locked in the attic too long, now dying to get out. Hell’s Kitty is an inimitable type of monster movie. Fans of the original series will likely love the film, as the tone is the same.

If there’s a message to the movie, what would it be?

First and foremost, the message in Hell’s Kitty is that there is a fine line between love and hate. It has everything to do with our obsession with love. When love becomes an infatuation, things can quickly degrade from good to bad, comic to tragic. It’s when we turn a blind eye to our reality and relationships, as a result of our feelings for someone or something, that we can too easily find our lives have become a living hell.