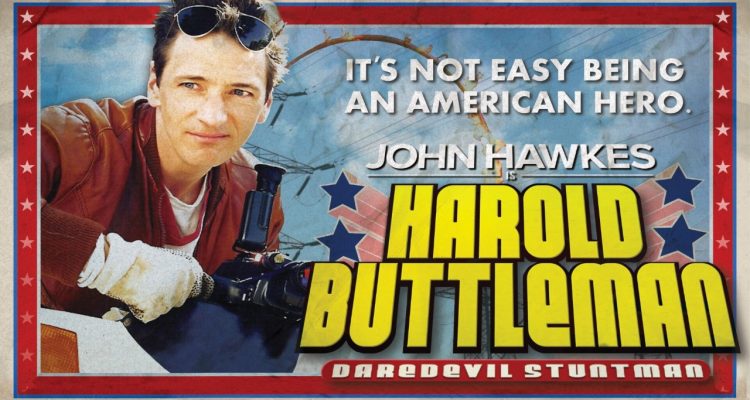 Buttleman (Hawkes, Winter’s Bone, The Sessions) is on the brink of TV stardom, a 3 am spot on the late night cable access, but the life of a daredevil stuntman is harder than it looks. Harold’s parents want him to move out of their basement and his girlfriend wants him to settle into a career selling bathtub parts. For Harold, it all depends on his big break. He gathers the entire town for his gala premiere celebration, but there’s a surprise in store. An offbeat comedy about following your dreams, and the finer points of being shot out of a cannon.

An all-star cast, including Anita Barone (‘’Curb Your Enthusiasm’’), Karen Black (Easy Rider) and Dan Castellaneta (“The Simpsons”), feature in wonderful gem of a film gets the chance to be introduced to audiences worldwide. Available on iTunes, Amazon and Google Play Feb 2, 2018.

I have to firstly ask, where did the interest in stuntmen come from?

I was interested in people who filmed themselves doing crazy things, and the tapes circulated. This was before YouTube, before the Internet opened the floodgates, but there was still an avenue for fame, or notoriety. Now, it’s a national pastime. It’s a huge part of our culture – people like Harold are everywhere.

The film is a comedy but it’s also filled with some remarkable stunt “stuff”. Was that always the goal?

John was determined to do all his own stunts. And it’s true, while the joke of the movie is that his stunts are lame, some of them were still pretty impressive – the laundromat scene, and rolling down the hill in a tractor tire.

How hard was it to pull this off? I imagine this was a movie done before the days of CGI and whatnot too, so you couldn’t fake anything?

Right. Plus, I was filming it through the eyes of Harold’s videocamera, so we couldn’t use multiple angles and shots to craft a stunt scene. It all had to flow as one long take, so John really had to do it. When he jumped off the roof in the first scene, we had a big stunt pad hidden just below frame, and John had to quickly roll off and onto the ground and then they pulled the pad away. I was the cameraman, and I had to follow John as closely as possible, without getting any of that in the shot. It was tricky.

At first, I wouldn’t let John do any of the stunts without doing them myself. But when it came time for him to roll down the hill in a tractor tire, we had a stunt coordinator who tested it, and I thought, “Good enough!” I’m still amazed by some of the things John did for the film.

Where was John Hawkes at his career at that stage and why was he the right choice for Harold?

He was a supporting player. He didn’t have any name recognition. This was his first lead role in a movie. I think John has a really sweet and funny side to him, that we don’t often see in his roles, even now. I was excited to see him bring that out for Harold.

Did the script start with the character or the storyline?

With the character. This dreamer, who is maybe a little deluded, but really believes in himself. Everything sort of unfolded from that.

What’s your ultimate goal with the re-release?

It’s all about the movie finding its audience. I think it’s even more relevant now than when it was made. Some of the details are anachronistic, of course – he is trying to get on public access, so this is obviously pre-YouTube. But he wants fame, the kind that all these kids on the Internet are seeking. Harold just approaches it in an extreme way. And yet he has a passion and a naiveté that any of us who are fighting to make our dreams happen can relate to.

Thank you so much for the Q&A! I have two small favors to ask:

If you can fit the Facebook link somewhere into this article, it’s the best place for readers to learn more about where and when the movie will be available: https://www.facebook.com/haroldbuttlemandaredevilstuntman/

Also, if you include any sort of bio for me, please feel free mention I have a new feature film, my second, that just started the festival circuit: Wild Honey. It’s an offbeat comedy about a lonely phone sex operator in Chicago who falls for one of her callers, and goes out to LA to find him. It stars Rusty Schwimmer, who plays Ronnie the bartender in Harold Buttleman, as well as Timothy Omundson, Stephnie Weir, and Todd Stashwick.