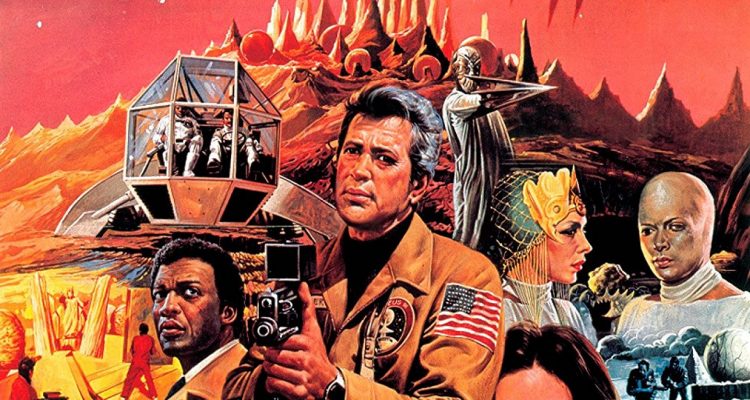 It’s a retelling of the colonization of the Americas.

Plot: In the 21st century, Earth begins the colonization of Mars. However, things do not go as planned, at first due to the hostile Martian natives and later because of the self-destructive Earthmen.

Review: Earth is on the brink of collapse, and the world sponsors an outreach mission to Mars with the intent of establishing contact with Martians and a plan to colonize the planet. On Mars, the beings there foresee the men from Earth coming and destroying Martian civilization. Being a peaceful race with no real defense system to stop the men from Earth, they wait. The first ships eventually land, and the leader of the space force is Colonel John Wilder (Rock Hudson), a hard man, but a wise one, and his subordinates range from cunning to downright foolhardy. One of his men – an introspective fellow (played by Bernie Casey) – immediately feels a connection to Mars and senses that this mission is fated to destroy the people of Mars. Up till then, every mission to colonize Mars has resulted in the disappearance of Earth’s emissaries, and so Wilder and his men approach the situation at hand cautiously and with some fear. Did the elusive Martians kill the Earthmen? Why is the planet so quiet and seemingly devoid of life? It soon becomes clear that the Martians have been using telepathic powers to fool the people of Earth into believing that Mars is exactly like Earth, complete with the return of the travellers’ dead loved ones to greet them and lead them to their graves. It’s a calm, quiet way to dispense with the conquistadors from Earth, like a virus that infects them, one by one. Speaking of a virus, the Earthlings bring their colds and their flu viruses to Mars and it is these simple plagues that end up wiping out the Martians almost in their entirety. As Wilder and the people of Earth try to establish a new civilization, the last few Martians pick them off one at time with mind powers and tricks. As Wilder and his people look back to Earth, they discover that Earth has been destroyed by nuclear war, and will never be fit for human life again … but that doesn’t stop most of the settlers of Mars from boarding their ships and returning to their home planet to make a stab at surviving on their doomed planet once again. Wilder and just a handful of humans left on Mars resign themselves to co-exist with the shadowy Martians and call Mars home.

A three-part miniseries with a cast of dependable actors (Roddy McDowell and Darren McGavin co-star), The Martian Chronicles, was adapted from a novel by Ray Bradbury. The allegory is immediately apparent and obvious: It’s a retelling of the colonization of the Americas. Bradbury’s story is out of date with his depiction (or the film’s version) of Mars. Mars here is nothing more than an idyllic landscape perfectly fit for human dwelling. No space suits or oxygen tanks needed. Still the film is enjoyable for the patient, discerning viewer. From director Michael Anderson (Logan’s Run).

Kino Lorber’s recent Blu ray release of The Martian Chronicles looks and sounds perfectly clear with a newly mastered HD transfer. If you own the previous DVD from MGM, you can upgrade this for your library.