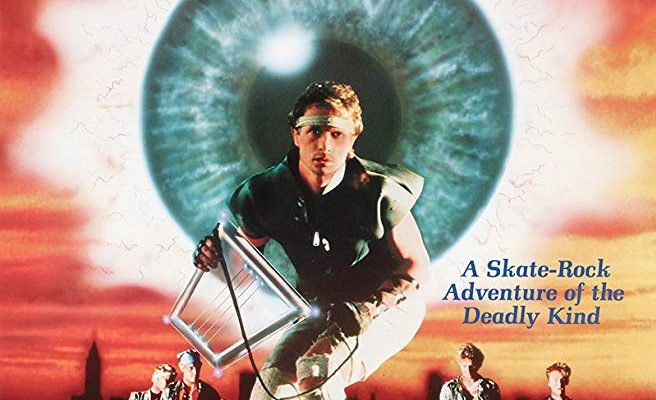 Classical mythology and ’80s attitude collide in Shredder Orpheus, a punk-tastic odyssey from Robert McGinley and Action International Pictures.  Set in a drab, post-apocalyptic urban war zone, Shredder Orpheus recreates the classical Greek tale of Orpheus and Eurydice for a more modern audience: the popular songwriter and performer Orpheus (Robert McGinley, who also directs), idolized in the zone’s punk rock scene, falls in love with a young dancer named Eurydice (Megan Murphy, Dark Matter), and the two are soon married.  The two become known to the corporate world, embodied by the entity known as the Euthanasia Broadcast Network, EBN, owned by Hades (Gian-Carlo Scandiucci, Red Snow), and is comprised of the living dead who do little more than slave away for corporate interests.  EBN uses its programming to keep the zone’s masses docile and occupied, and The Network sets out to recruit Orpheus via possession and control of  Eurydice, who is tragically killed and taken by corporate goons at the wedding reception.  Orpheus sets out to rescue Eurydice’s soul from the Network with an enchanted guitar rumored to have been created by Jimmy Hendrix, and adventure, thrash music and skateboarding ensue in the process.

Although this is a dated reference for audiences younger than 30 years of age, Shredder Orpheus plays like a late night sci fi feature you might see on a public access channel towards the late ’90s.  This is appropriate, seeing as how the movie is set in a not too distant but apocalyptic future but made in the late ’80s, feeling every bit a part of that time period.  The middle stanza drags quite a bit after the initial “rescue attempt” plotline, and one of the cooler “weapons” and subsequent effects of the Future Hendrix Guitar gets abandoned after only a handful of uses.  The actors portraying the corporate triumvirate of the Euthanasia Broadcast Network – EBN – are all terrific whenever any or all appear onscreen, and it would have been great to get more from them than we get here.  While the obvious parallels are drawn to the characters’ namesakes via classical Greek mythology, the larger metaphorical aspect surrounds the dilemma of the independent artist vs the inclination of “selling out” to certain powers that be.  The very presence of Hades as the head honcho of the Euthanasia Broadcast Network, Orpheus encountering his parents engaging in menial work at the EBN office, and a sequence involving “escape” back to – of all places – a dark, dreary, war-torn urban environment just to live free and content lives, shredding to the Roland Barker soundtrack, is the kind of story and moral message that practically screams 1989, the year in which this movie was made.  Shredder Orpheus is a love letter to independent artistry and ’80s counterculture that is, frankly, missing or underrepresented in today’s social climate, and if it were possible to be nostalgic about the future, it would be via the attitudes present in the future as seen in Shredder Orpheus, a blast from the past. 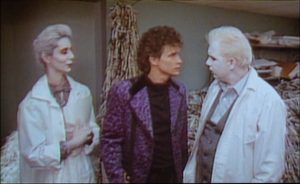 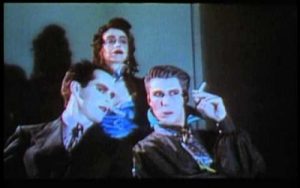 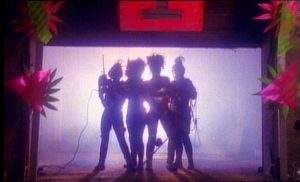