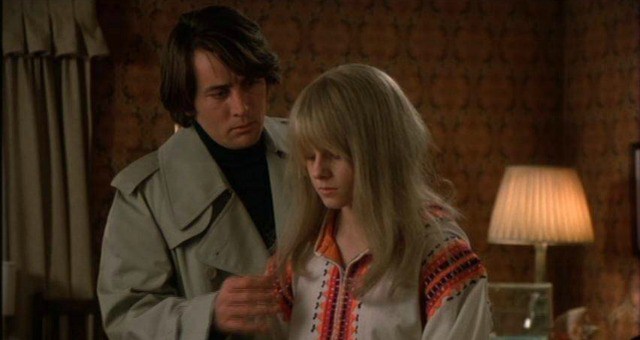 Foster shines in an early role and the movie mixes horror and drama nicely.

Plot: Quiet, withdrawn 13-year-old Rynn Jacobs (Jodie Foster) lives peacefully in her home in a New England beach town. Whenever the prying landlady (Alexis Smith) inquires after Rynn’s father, she politely claims that he’s in the city on business. But when the landlady’s creepy and increasingly persistent son, Frank (Martin Sheen), won’t leave Rynn alone, she teams up with kindly neighbor boy Mario (Scott Jacoby) to maintain the dark family secret that she’s been keeping to herself.

Review: Rynn (played by young Jodie Foster) is a perceptive and wise 13 year-old girl who lives in a cozy two-storied home in a small town with her reclusive poet father who hasn’t been seen in town in months. Rynn doesn’t attend school and does all her father’s chores in town – including taking care of the finances and paying the bills. On Halloween night, she only gets one visitor: a creepy pervert named Frank (played by Martin Sheen), who stops by to visit her father, but instead he makes a move on Rynn, starting off a chain reaction that will affect Rynn’s – and his – fate. Over the next few weeks, Frank and other curious neighbors and even the landlady stop by and press Rynn to bring her father out of his hideyhole where he’s been busy “translating some Russian poetry,” and when it comes to the point where Rynn finally snaps and kills one of her nosy visitors, she’s left with an enormous responsibility to do something clever with the body. Enter a neighbor kid (played by Scott Jacoby) who dabbles with parlor magic, and when he figures out that Rynn’s father is mysteriously out of the picture, he decides to help her conceal the murder she committed and cover up the fact that she’s living a life that is both strange and illegal. As Rynn and the boy develop a weird attraction to one another, they must come up with a ruse to keep her father “alive” so that they can dodge police visits and other callers, including Frank, who tries to blackmail Rynn into doing things that she simply won’t do.

An unusual chamber drama/thriller with unsettling undertones and themes, The Little Girl Who Lives Down the Lane offers up a strong role for star Foster, who anyone could see would become a star even at 14 when she made this. The film has horror and thriller/mystery overlaps, which serve the film well, and director Nicholas Gessner navigates some tricky waters with very subversive and mature themes. The movie is (at times) pretty shocking and sleazy, and co-star Sheen amps up the creepy factor with his performance. The movie is somewhat reminiscent of Let the Right One In / Let Me In, but only with its melancholy, forlorn youth subtext.

Kino Lorber and Scorpion Releasing recently released a nice looking HD mastered Blu-ray of The Little Girl Who Lives Down the Lane, and it’s a definite improvement over the old MGM DVD release from over a decade ago. The disc comes loaded with a running audio commentary by director Glassner, and an on-camera interview with Sheen, as well as with the original trailer and reversible artwork. If you’re looking to stock up on spooky movies for Halloween, this film is a real treat.