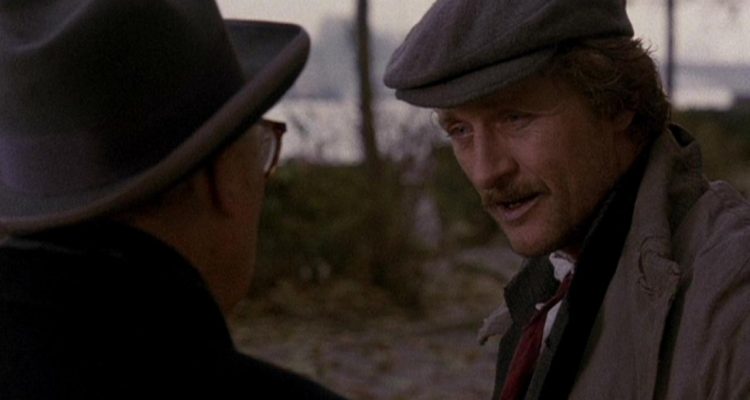 Plot: An alcoholic man wants to return the money he has borrowed.

Review: A derelict named Andreas (Rutger Hauer) has been living in the rough for years in Paris. Sleeping under bridges and living day to day in a drunken haze, he has a past he can’t forget and an uncertain future he’d almost rather live without. One day – out of the blue – a stranger offers him 200 francs as a loan, but asks that he pay the money back to him by way of giving it to a saint at a local cathedral when he’s able to. Being a man of honor, Andreas accepts the money and vows to pay it back to the saint. With money in his pocket, he gets a shave and a haircut, goes out to eat and drink, and to his surprise, another stranger offers him a nice sum of money if he’ll show up to his house the next day to help him pack some boxes and move. Thinking he’s on a lucky streak, Andreas again accepts, feeling pretty great. He shows up to work, earns the money, and with too many bills to keep crumpled in his pocket, he goes out and buys a nice used wallet … and finds 1000 francs in it! All of a sudden, he’s richer than he’s been in years, and he starts to enjoy eating out and drinking his fill with wine. His next order of business is to go to the church, repay his debt, and get his life back in order, but then by coincidence he runs into his old flame – the woman he loved before he was sent to prison for killing a man. She takes him on a date, and they sleep together, and he wanders out into the city again, feeling like his life has taken a miraculous turn. But before he can return the money to the saint, he once again is sidelined when he sees that an old acquaintance of his has become a famous boxer.

He tracks him down, and suddenly they’re old pals again for a day. The boxer treats him really well; he takes him out to eat, gets him a nice hotel room for a few nights, and buys him a new suit, and Andreas carries on a fling with a young dancer who is staying in the same hotel. After a few blissful days and nights of feeling like a new man, he goes back out to try to pay his debt again, but yet another old friend of his – an even worse off alcoholic than he is – waylays him and snookers his last 200 francs from him. Left with nothing but a belly full of cheap wine and what he started with, Andreas wanders back out into the rain. Days later, the same stranger comes to him and offers him another 200 francs if he’ll only promise to return the money to the saint, and Andreas accepts, only we know that he will spend the rest of his life trying to return the money, but will always fall just short of accomplishing his goal.

A beautifully sad dramatic allegory with a perfect performance by Rutger Hauer, The Legend of the Holy Drinker is a great discovery that until now has gone unnoticed in North America. Just released by Arrow Academy, this film was previously unavailable on video, although for many years I’ve owned an Italian DVD, which I kept as a treasure. From director Ermanno Olmi, this is a classic waiting to be cherished by film lovers and fans of Hauer, who gave the performance of his lifetime.

On the Arrow disc (which also comes with a DVD as a bonus), Hauer is interviewed on camera, and his responses are insightful and interesting. Check this movie out.