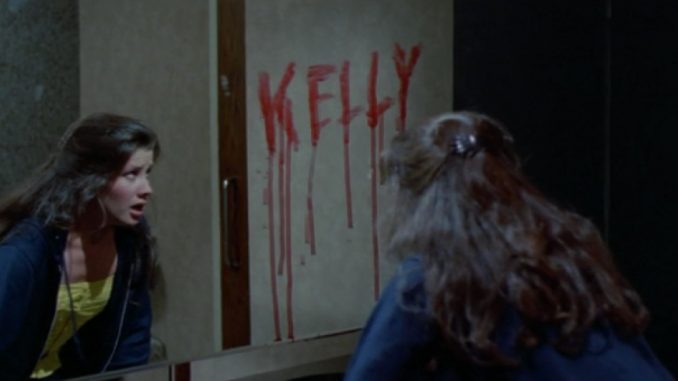 Great characterization and every kill matters rather than feeling like violence for the sake of it. This is a must-have Blu-ray.

Plot: While trying to understand a frightening reoccurring nightmare, a pledge is coaxed into breaking into her father’s department store by her sorority sisters, where a deranged killer targets the girls and their boyfriends.

Review: Hot to join the hippest sorority on campus, rich girl Kelly Fairchild (Daphne Zuniga in her debut) is forced to undergo an initiation that involves her stealing the keys to her father’s sprawling department store so that she and some other pledges can sneak in and steal the night watchman’s uniform. It sounds easy enough, but the plot for this mid-’80s slasher is thicker than a handful of textbooks, and thank goodness! Turns out Kelly’s past is complicated: She has a recurring nightmare where she’s a child and she interrupts two lovers in a sinful embrace, and in a fit of rage, she stabs the man and lights him on fire. She’s been haunted by the vision for years, and her parents (played by Clu Gulager and Vera Miles) have skirted around the subject for as long as she can remember, and so when her psychology professor sees how tormented she is by these visions, he asks her to allow him to experiment on her with hypnotherapy. They make progress, quickly revealing that she might have a split personality, but on the night when she and her fellow pledges attempt to pull the prank on their initiation night, everything comes crashing into perspective when her friends are murdered one-by-one by a stalker in the empty mall.

I watched The Initiation years ago when Anchor Bay released it for the first time on DVD, but I don’t remember it being as good as when I screened Arrow Video’s brand new Blu-ray. It’s consistently engaging with much richer characterizations and empathy for its characters than I recalled. Each character (even the incidental ones you’re not supposed to care about) is given a purpose and dimension, and when they’re killed off, you wish it weren’t so. Daphne Zuniga is really convincing in a role that might have come off as boring or thankless if someone else had played her part. The screenplay by Charles Pratt Jr. is multi-layered, interesting, and engaging, and director Larry Stewart (who’d made a name for himself in episodic television) manages to give the film a gravitas most other slashers wouldn’t have dared to attempt. Each kill in the movie is important and matters, and for that, this is one of the more important slasher films from the 1980’s.

Arrow Video’s nice looking Blu-ray (newly restored in 2K high definition) is well worth the upgrade from the Anchor Bay DVD, and it comes with some bonus features such as a running audio commentary, newly filmed on-camera interviews, and other features like extended scenes and trailers. Not expecting to change my opinion on this film, consider me very pleasantly surprised that it does indeed warrant a reevaluation.