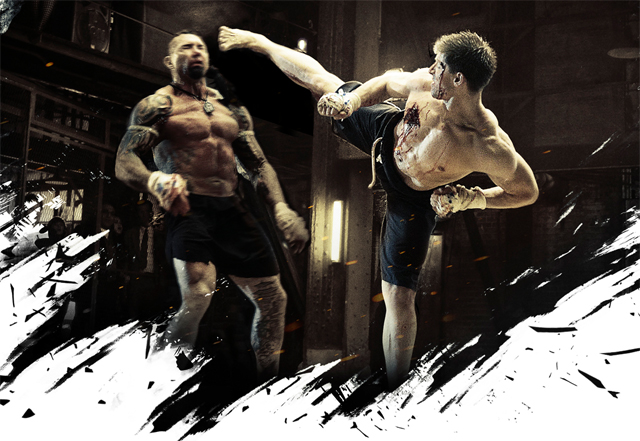 Brings the b-movie goodness and is an entertaining update of the original. Alain Moussi’s got the goods to be the next action star. Why is JCVD dubbed though?

Plot: An update to the 1989 classic film KICKBOXER, KICKBOXER: VENGEANCE follows the story of Kurt Sloane (Alain Moussi), who travels to Thailand to avenge the death of his brother at the hands of Tong Po (Dave Bautista). Kurt trains with the legendary Master Durand (Jean-Claude Van Damme) until he is ready to take on Tong Po in a brutal fight to the death.

Review: If you’re going to reboot an action movie favorite, you better do it right, and as far as I’m concerned Kickboxer: Vengeance is every bit as good – and maybe even a little better – than the original 1989 flick, starring Jean-Claude Van Damme. Long in gestation and in post-production, Kickboxer Vengeance was well worth the wait.

Starring up and comer action star hopeful Alain Moussi as Kurt Sloan, Kickboxer Vengeance should look, smell, and taste like apple pie and peanut butter sandwiches to the kid who grew up in the ’80s: Jean-Claude Van Damme comes back into the fold in a plum role as Sloan’s mentor, a tough-as-nails martial arts guru who teaches Kurt how to fight in the ring with the hulking Tong Po (Dave Bautista), who earlier murdered Kurt’s brother Eric (the late Darren Shahlavi) in a fight. Kurt has abandoned his life to train under Durand (JCVD), with the intent to infiltrate Tong Po’s fighter cult, and work his way into a legitimate bout with him, and to the death. Along the way, Kurt makes a new friend in a fellow fighter (played by Georges St-Pierre) and a girlfriend, a tough cop named Liu (Sara Lane), and he also picks up some serious mad skills in MMA and jujitsu. Will Kurt defeat Tong Po in the ring? Will there be a sequel? Come on, guys. You know it!

If you have any love for the action and martial arts films from your youth, then the very sincerely made Kickboxer: Vengeance will be a sweet throwback to your younger years. It’s every bit the “B” movie the original movie was, but that’s what’s so great about it. Moussi makes for a cool action star hopeful, and I hope he has a long career ahead of him. His support comes from heavyweights like Van Damme, who, though ADR’d by someone else at times, gives another solid supporting performance in this late era of his career. Bautista is a solid villain (as always), and other supporting help from Gina Carano in a fairly thankless role and Shahlavi as the ill-fated brother character all enhance this film and make it much better than it had any right to be. Director John Stockwell (In the Blood with Carano) does a fine job with the material, and here’s hoping the upcoming sequel can match this one’s entertainment quotient.

Kickboxer Vengeance will be on Blu-ray and DVD on Tuesday, November 11th from RLJ Entertainment.