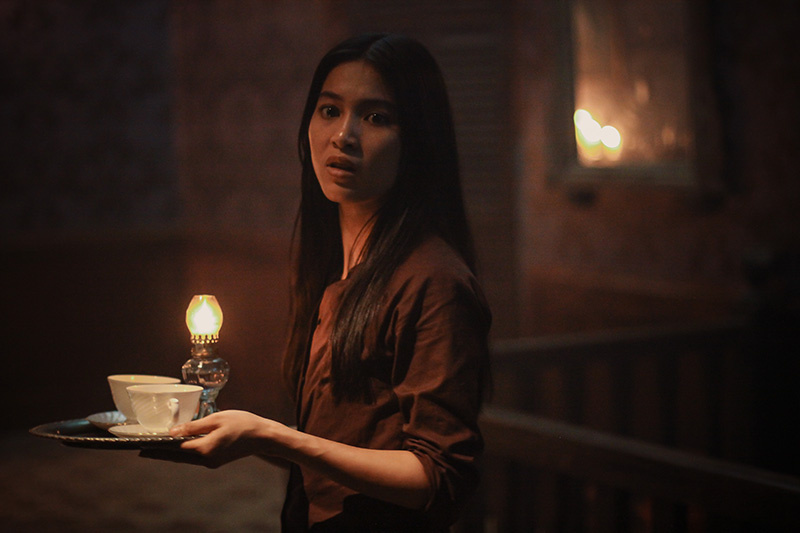 “The Housemaid,” like other gothic horror movies, is set in a mansion full of secrets. A formerly bustling house is now held by a few quirky characters who are keeping a secret about a murder. Some gothic horror houses are about many secrets. This house has only one secret that must be not spoken of yet we are sure to eventually find out what happened and who did it.

Director Derek Nguyen said he wanted to set the film in 1953 during the First Indochinese war for freedom from French colonialism. The rubber plantation is a brutal place where some Vietnamese taskmasters are cruel and often murderous to the plantation workers. “I wanted to show some of the conditions that the oppressed Vietnamese were experiencing during that time,” Nguyen said.

“It is inspired by my grandma. She was once a housemaid at a large estate in Vietnam and she loved to tell me ghost stories. One of the things that really stuck with me was she believed that spirits lived in trees. So I got freaked out by trees for a very long time. So. On a trip to Vietnam I learned about all of the atrocities that were happening in the rubber plantations during the French Colonial Period. There are museums that are completely devoted to the lives of plantation workers which were like indentured servants / slaves. So I was a really inspired by that and so I brought all of those things together. I wanted to write a gothic love story a gothic romance with some horror elements and we got “The Housemaid.”

“The Housemaid” is just hitting American cinemas and IFC on Demand now. Released to Vietnam in 2016 as “Cô Haû Gaí,” it was the most successful horror film in Vietnam. It has been described as a gothic horror ghost story set on a rubber plantation.

“Basically in Vietnam there is a cinema board aka censors,” Nguyen said. “They were overseeing everything about the production. From the writing of the script. I had to rewrite the script a couple of times before they gave me the permit to shoot in Vietnam. They were on set. They were not there all of the time but they were there a lot. They were also looking at the edits. They were instrumental in the final product. But it was a challenge. I’m an American so I believe in artistic freedom. But I knew that was the condition which I had to work in. That was challenging but in the end I feel really good about what happened. They were really sensitive about sex and violence at the same time. They were ok with sex. Violence. That was ok. Putting it together was something that they were really, really like ‘no no.’ They would give me notes like ‘you have to cut at least four stabs.’ I’m like okayyy. Is this considered a stab? Is this considered a stab? What is considered a stab? ”

Nguyen gestures in and out as if holding a knife. He had to consider if a stab is the motion a hand going forward or the impact of the motion.
“Is this considered a stab? It was kind of ridiculous but you had to do what you had to do. Right? In order to get a permit you had to get approval of the script in order to shoot in Vietnam. So that was a challenge. This has a few more stabs than in Vietnam but I couldn’t really change a lot of it.”

The Vietnamese government did not want Nguyen to show a ghost. He was told that the sight of ghost would cause panic in the countyside. He had to work having a ghost because censors watched his filming.

“There were some conditions I had to work around. I wanted to have Camille the ghost do a lot more (in person),” he said.

“It was like the MPAA during the heyday of the ratings system, he said. “We really had to work within that. For instance originally when Camille was committing suicide and she had the baby she didn’t have it like this (cradled in her arms). Originally I had her having the baby by the hair. It was really scary stuff. Dead babies everywhere. Of course, they show up on set the day that we are shooting this and they are like ‘No. You can’t do that.’ I think it went okay.”

“The Housemaid” has a ghost or at least some synonym for a ghost. There are different special effects representing dead people.

“The Vietnamese government doesn’t like graphic nudity and graphic violence. But think I’m really happy with what I ended up with. I didn’t want it to be exploitive. That was the biggest thing. Months of dealing with the murder scene. How to shoot it. What angles? All of that stuff. Without using a real knife. It was a lot of things we had to go around. And there was a censor person on set.”

There were a lot of Vietnamese women who wouldn’t do this role because of the brief nudity. “I wanted someone who was bold and willing to go there in so many different ways be mysterious and not know exactly where she was at all times. Where we shot this we were like ‘okay you know exactly what’s going to happen.’ And the next take was “you’re completely innocent and you don’t know what’s going on.’ We tried different things.”

Nguyen said he liked leaving the film in her hands. “She is beautiful. She rides a motorcycle. She is so kick ass that I thought we could get something out of her that could transform her career. It actually has which is great.”

Nguyen was asked “How much were you working with the idea of 1970s made for TV gothic horror?”
“I’ll be honest with you. None,” he said. “But I am so happy that you said that. I love gothic horror and I love actually. I love Guillermo Del Toro. I love Alfred Hitchcock. So this is kind of like a merger of them. That was my inspiration. Along with a little bit of Jane Ayre and little bit of Vincent Price films. Gothic romances were really big for a while and now they are like, nowhere. Whenever I tell people it is a gothic horror they are like ‘what?’ ”

“She is like a super comic actress. She is known for doing huge comedy. I called her the Roseanne Barr of Vietnam. Everywhere we went there were a lot of people doing selfies with her. The head housekeeper she is the judge of South Vietnam’s Got Talent.”

“When I was doing research for the film I realized that there were a lot of parallels between Vietnam workers and the African-American slaves on the plantations in the south,” Nguyen said. “I always had this in my mind. So when we were finishing up the Vietnamese version I casually had said something to my producer “you know there’s a lot of parallels in this so we should consider doing an American remake.” One of my conditions was that if we were going to do it I insisted that we have to have an African American writer and an African American director.  It needed a sense of authenticity to the new characters. For me that is why I made this film. As a Vietnamese person. As a Vietnamese-American person I felt like I wanted to have that authenticity to those characters. So I am executive producing it. I am going to be working with Jeffrey on. I am going to give him as much creative freedom as possible. I have admired his work so much. I am creative consulting on the process.”

An audience member asked: “I liked the idea that the ghost or the supernatural element came from the western influence. Was that real or part of the story she is telling?”

“I was exploring the idea of the unreliable narrator,” Nguyen said. “Basically what you saw was a story that (the maid) told. And whether or not it is real or not is up to you. So that was kind of my idea of that. But at the end I kind of threw that ghost in the window so then I kind of wanted to have more of a twist.”