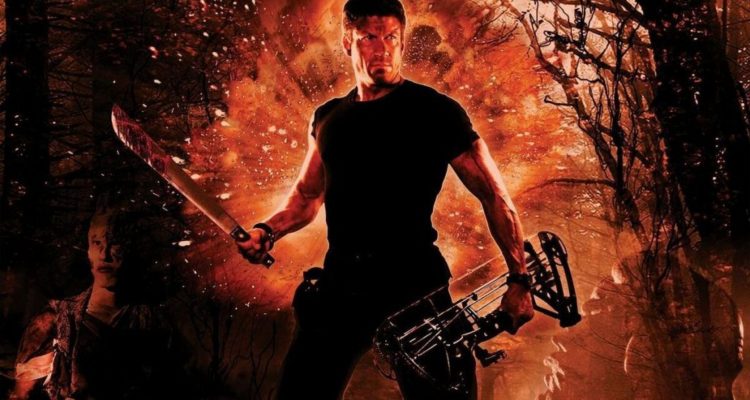 The Horde is an entertaining blend of The Hills Have Eyes meets Rambo and will please horror and action fans alike.

Plot: The film follows John Crenshaw as he accompanies his girlfriend and her students on a weekend nature-photography expedition deep into the woods. What should be an educational and fun-filled weekend turns into horror as the group is besieged by an unspeakable evil – a horde of hideously disfigured, mutated humans with an insatiable taste for blood. As things go from bad to worse, Crenshaw becomes their only hope if they are going to get out alive.

Review: A bloody zipper line unites the horror genre with the action genre in The Horde. The inspirations are clear and obvious: It’s all Rambo and it’s all The Hills Have Eyes. My goodness, gracious. Why hasn’t anyone done this before? Paul Logan, the underrated action star from Ballistica and Code Red, stars as Ex-Navy SEAL John Crenshaw, who does a solid by chaperoning a camping trip spearheaded by his girlfriend, who’s a teacher. Her students are the usual, horny teenager lot, but that’s great because we know where this camping trip is headed: TO HELL! It doesn’t take long for the hideous mutant freak horde – from an inbred colony of settlers in the woods – to start attacking and hacking. Who’s to save those that weren’t slaughtered at the get-go? John Crenshaw, armed with a machete and bow and arrow!

Almost everything about The Horde is right. The one major issue I had with it was that it was too graphically violent, with some torture porn elements that I’m not a fan of. The bad guys are played by Vernon Wells, Bill Moseley, and Costas Mandylor, all tried and true villains from established careers playing horrible characters. The make-up and gore effects are very effective, all the more so when Paul Logan is getting sweet revenge. Horror fans will totally dig it. Action fans will appreciate it, especially if they can get past the gore. I hope they make a sequel!

MVD Visual just released an unrated DVD of The Horde, and it comes in a widescreen presentations, with several supplemental special features for those interested. It’s available to own now.