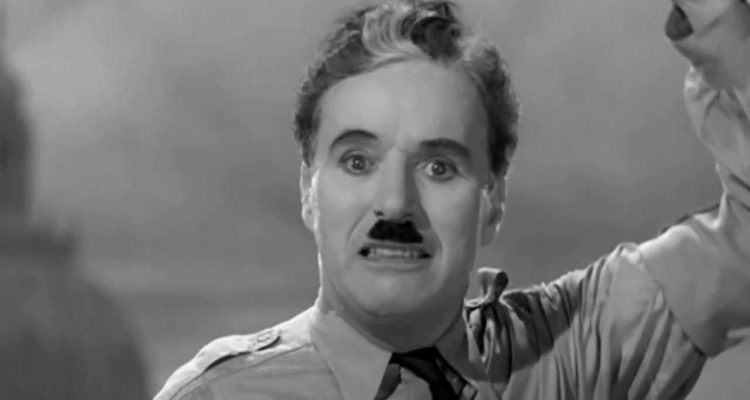 This movie is a masterpiece that should be a must-see for every person who professes to love film.

Plot: Hynkel, the dictator of the fictional country Tomainia (Charlie Chaplin), endeavours to surprise the Jewish people in his country, which includes a Jewish barber (also Charlie Chaplin).

Review: I had heard so many things about this movie, I honestly think it’s Charlie Chaplin’s most highly-regarded movie. It was Chaplin’s first sound movie, and I was curious to see how he adapted to talking pictures. In short, this movie is a masterpiece, and really should be must-see viewing, not only for film students and lovers but really everyone living through these trying times should consider giving it a shot as well – not only will it put a smile on your face with its humour, but the themes are still relevant today.

Chaplin handles the dual role of villain and hero seamlessly. Even in the sound era, he still relied on his exaggerated brand of physical comedy for laughs. There’s a scene where he’s trying to escape a group of stormtroopers, and literally, you would think the man’s head was on a swivel, as was surrounded on all sides, so embellished was his actions. I think it’s a testament to Chaplin’s talent that his particular type of comedy was still effective, even in a sound film. The supporting characters are equally well-played, though I found Paulette Goddard’s acting and dialogue didn’t translate as well to a sound movie – I preferred her pantomime in silent films, as her voice is squeaky and kinda annoying.

Regardless of anyone’s opinion, if the movie is actually funny or not, you have to give props to the satire elements in the film. It’s clearly a send-up of Adolf Hitler and his Axis ally Mussolini, and Chaplin threads obvious jabs throughout the film to demonstrate his contempt for those men and the absurdity of their tactics. A discussion on who is going to invade a neighbouring country devolves into a food fight. Henkle carries on boisterous and energetic rallies, but the dialogue is preposterous. Henkle will run into a room for five seconds to pose for both a portrait and a sculpture but then will run out just as abruptly, much to the frustration of the artists trying to capture their leader’s image. It’s all in good fun, but the undercurrent of contempt is evident.

Chaplin’s speech at the end of the movie was possibly the most moving movie speech I have ever heard, and it’s something that I feel should be quoted to today’s world leaders. Amidst the craziness and the absurdity in the film, the fact that one character is brave enough to stand up and say what is obvious, but still needs to be said, underlines both the courageousness of the Jewish barber and the fatal flaws of humankind in general.  Humankind often proves to be its own worst enemy, and that is never on display more than in this picture.

I have no negative points for this movie.  It is simply a masterpiece. If you’re going to watch one Charlie Chaplin movie, I can’t recommend any of the other ones I’ve seen above this one.