The Gang isn’t especially noteworthy, but the double feature is worth picking up namely for Three Men to Kill, which is in the vein of a 007 movie with a gorgeous leading lady, a strong, forceful leading man in Delon who was in his prime here, and all the intrigue and thrills that fans of the 007 movies have come to enjoy, the movie is close to be an underrated classic, if it weren’t for a terrible ending.

A group of ex-soldiers form a crime gang and their exploits make them notorious in post World War II France.

A group of friends from World War II reunite at a farmhouse and make an audacious pact: They will form a gang of five and become the most notorious gang there ever was. Their leader is a bit of a loose cannon named Robert (Alain Delon), who is also a fearless Romeo with the ladies, and after a few successful bank robberies with his crew, he takes a lover named Marinette (Nicole Calfan), whom he plucks from a nightclub where she was working as a coat check girl. Robert demands complete loyalty, and she quickly falls in love with him, becoming his wife for all intents and purposes, and like some of his crew are already doing, Robert and Marinette start a family. With their jobs and antics becoming ever more daring and bold, Robert’s gang finds itself in the center of the media’s attention when Robert gets apprehended by the police in a basic raid for miscreants, but they have no idea who he is at first. Instead of waiting around to be processed like a casual vagrant (the raid had something to do with curbing illegal immigration), he grabs a machine gun from a policeman and proudly announces who he is and that his gang has been the cause for dozens of recent bank robberies. This is a mistake, as now the police know what he looks like and his crew’s MO, but he gets away and soon the cops make it a priority to track him down, leading to a huge shootout at the gang’s countryside hideout. While the gang gets away again, it only proves that the gang’s days are numbered, and when Robert gets careless and uncontrollable with his antics, the crew will soon be forced to move on without him.

From director Jacques Deray, The Gang has a weirdly upbeat score that continuously plays its theme throughout the entire movie over and over, as if it’s trying to suggest that the gang’s happy-go-lucky lifestyle should be considered lighthearted, but the movie itself is no laughing matter. It’s clear that while we’re following a group of bad people, it’s also pretty obvious that the end of the movie won’t be a happy one. Star Delon acts like an unhinged and uneducated teenager, which is interesting because that’s likely where that character plateaued in life, and so his performance makes the film watchable in its screwy way. The movie doesn’t really leave much of any impression otherwise.

A man pulls over the side of the road one night to help another man who is injured in a car crash, but this action will make him the focus of an assassination plot from shady assassins and a government cover-up.

One random night, a handsome gentleman named Gerfaut (Alain Delon) is driving on a country road minding his business when another driver speeds by him, honking his horn. Further down the road, Gerfaut sees that the car that passed him has crashed into a tree, and so he pulls over and helps the injured man into his car and drives him to the hospital, not realizing that two assassins are watching him as he does all this. He drops the man off at the hospital, and right after he leaves, the man dies, and it’s revealed that he was shot twice, and that the accident was caused by those injuries. The assassins follow him and then get instructions from their superior – a government contractor who is trying to wipe any trace of a shady business deal involving faulty missiles – and their instructions are to eliminate Gerfaut. Their first attempt happens at the beach where he’s swimming with his girlfriend (played by the stunning Dallia Di Lazzaro), but the attempt fails. Stunned at what happened, Gerfaut goes to a friend of his, an ex-government agent, and seeks advice. Around the same time, he realizes that the man he tried to help the previous night died of gunshot wounds, which clues him into the fact that now he’s at the center of some kind of conspiracy, assassination, and cover-up, and before the day is done, he’ll be both running for his life and pursuing the assassins who’ve been sent to kill him. Much to everyone’s surprise – especially the assassins – he’s a formidable opponent with a secret past, which leads us to believe that perhaps he was a government agent at one point himself. As he gets closer to the truth, he also begins attracting law enforcement as bodies pile up and his car is torched and abandoned, but Gerfaut is great at surviving and eliminating threats, until he finally reaches the top of the food chain, where he may have met his match.

A tight action thriller with really good action, suspense, and even a solid car chase through the streets of Paris, Three Men to Kill had me hooked until an unnecessarily downbeat ending that should have been left on the cutting room floor. In the vein of a 007 movie with a gorgeous leading lady, a strong, forceful leading man in Delon who was in his prime here, and all the intrigue and thrills that fans of the 007 movies have come to enjoy, the movie is close to be an underrated classic, if it weren’t for that terrible ending. In some ways, it reminded me a little bit of the movie Ronin with Robert DeNiro that came about 15 or so years later. Director Jacques Deray’s film is quite good for fans of espionage films, so fans of that genre take note. 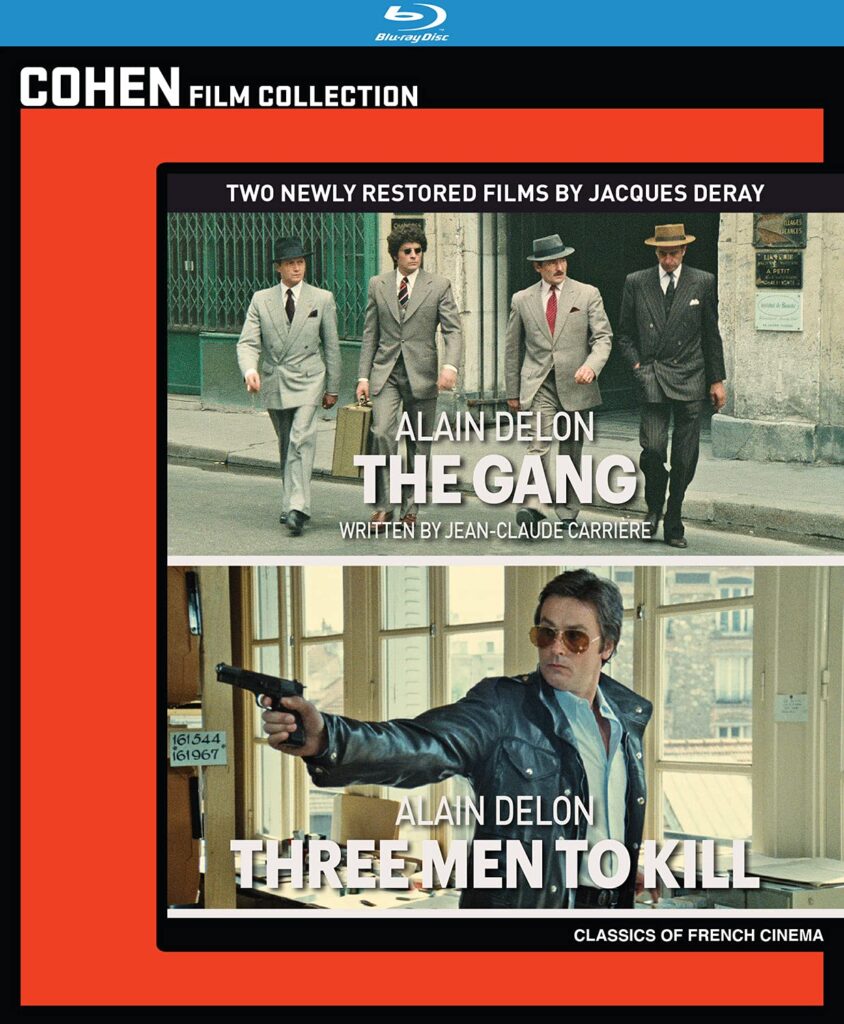