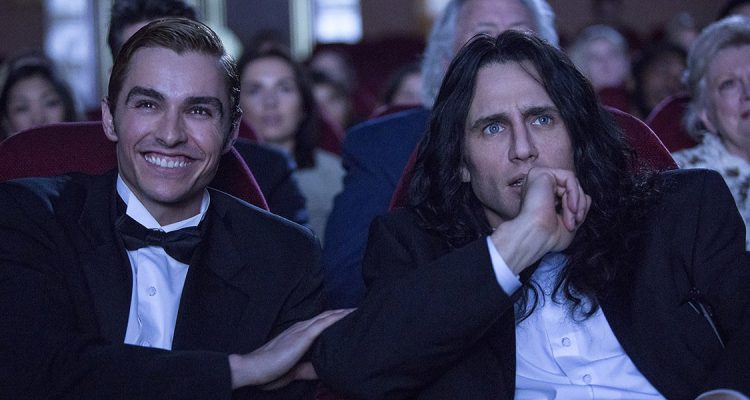 Plot: With ‘The Disaster Artist,’ James Franco transforms the tragicomic true-story of aspiring filmmaker and infamous Hollywood outsider Tommy Wiseau—an artist whose passion was as sincere as his methods were questionable—into a celebration of friendship, artistic expression, and dreams pursued against insurmountable odds. Based on Greg Sestero best-selling tell-all about the making of Tommy’s cult-classic disasterpiece ‘The Room’ (“The Greatest Bad Movie Ever Made”), ‘The Disaster Artist’ is a hilarious and welcome reminder that there is more than one way to become a legend—and no limit to what you can achieve when you have absolutely no idea what you’re doing

Review: The Good: As a fan of The Room since seeing it a few years back, I eagerly looked forward to this movie and it didn’t disappoint. Based on Greg Sestero’s memoirs with the same title, The Disaster Artist is an honest and poignant look at Tommy Wiseau, a once-in-a-lifetime character with a mysterious past, loads of money and an ambition to make it in Hollywood. James Franco is perfect as Tommy, getting his inflections and mannerisms down perfectly. The rest of the cast is equally perfect and very close in looks to their real-life counterparts. What is great though, is that it is very easy to just dismiss Tommy Wiseau as a wacko without a second thought and a movie like this very easily could have condemned him for his misguided attempt to make a movie. Instead, the movie shows the difficulties of making it in Hollywood and how one man can beat the odds and become famous – no matter how much he lacks talent. The movie deftly moves between comedy and drama, walking the fine line between both without giving in to the pitfalls of either genre. This is just a really funny, poignant movie that resounds, especially to people who know more than the surface of the movie business.

The Bad: I don’t really want to say this is a “bad” part, but it does help if you’ve seen The Room, the movie Tommy Wiseau infamously made, prior to seeing this movie.  I don’t think it will have the same impact if you don’t.  That doesn’t mean you should avoid it, but it helps if you’ve already been exposed to the crazy ineptness that is The Room to appreciate all the finer parts of the movie. The ending, which shows the replication of several scenes from The Room will especially fall flat if you haven’t watched it first.