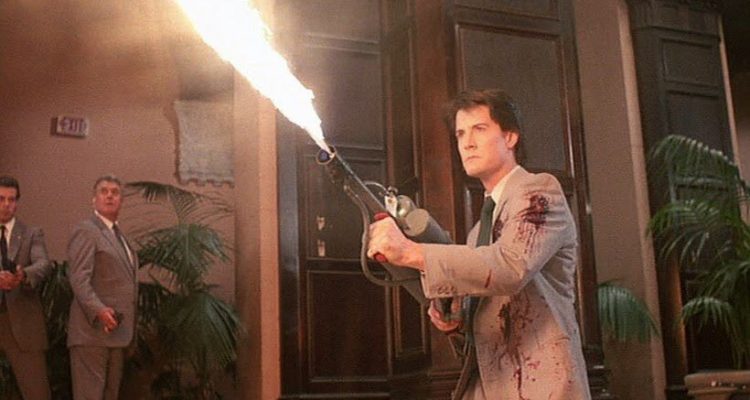 A classic genre hybrid. The film is very welcome on Blu-ray.

Review: An alien is in Los Angeles, taking over one body at a time, using it as a host to feed on the pleasures of Earth. It likes fast cars and loud rock music, strip clubs and alcohol, and it has zero regard for human life as it carves a path of untold carnage and destruction on its way to having a good time. Detective Beck (Michael Nouri) is after one of the hosts of the alien, as it has just mercilessly robbed a bank, killing dozens of bystanders for some loot so that it can extend its spending spree. Beck and his police department have no idea that the alien is hiding within the man, and after he and a whole squad of cops blow him away in an unusual standoff (the guy goes down laughing after being riddled with bullet holes), Beck thinks it’s all over, but the nightmare is just beginning.

As the Swiss-cheesed guy is lying on a hospital bed, the slug-like alien crawls up out of its mouth and switches bodies to the stroke patient the next bed over and, just like that, the alien is walking the streets again, stealing heavy metal cassette tapes from the record store and clubbing at strip joints. Enter oddball FBI agent Lloyd (Kyle MacLachlan), who drives a Porsche and isn’t quite familiar with the customs of Los Angeles life. Lloyd insinuates himself onto Beck’s task force and all but takes over the investigation, proving that he can handle himself as the alien takes over one body at a time, with a swathe of collateral damage in its wake. It takes Beck awhile, but eventually he realizes that Lloyd is an imposter (his Porsche is stolen, for one), and might in fact be an alien from outer space, hunting another alien, which hops from body to body just like in crummy science fiction movies.

Lloyd redeems himself with the truth even though it takes awhile for Beck to believe him, and after several close call shootouts with the alien (the stuff with Claudia Christian as the stripper host is outstanding), the two cops must stop the power hungry slug monster as it makes a desperate dash to take over the United States by way of entering into a politico’s mouth on the eve of his inauguration of a Presidential election bid.

From director Jack Sholder, who’d made the interesting horror films Alone in the Dark and A Nightmare on Elm Street 2, The Hidden is one of the greatest action / science fiction hybrids of all time. It’s got the off-kilter buddy / buddy dynamics of a Lethal Weapon-type picture, and it’s also got the oozy, bloody creature effects of something like The Terminator or Invasion of the Body Snatchers. It’s a slick take on both genres, and it’s got some sexy pizazz, some hilarious comedy, and even a rocking soundtrack with a theme song (listen to the end credit song “Hidden” performed by The Truth for more on that). A true cult classic that cross-pollinates several reliable genres, The Hidden is a great melding of worlds that has a bounty that keeps on giving. There was a sequel several years later, with Nouri reprising his role in a cameo.

Warner Archives has busted The Hidden out of their vaults and released it as part of their Archive Collection for Blu-ray. The transfer doesn’t impress, particularly, as I don’t believe the elements were remastered for high definition, but the image is certainly an improvement over the New Line DVD from nearly two decades ago. I’ve owned this film on several different formats over the years, and I’m reasonably happy with this semi-definitive release. Special features include a commentary by the director (which sounded like a new commentary, versus his original commentary for the VHS and DVD), as well as a special effects reel and the trailer.