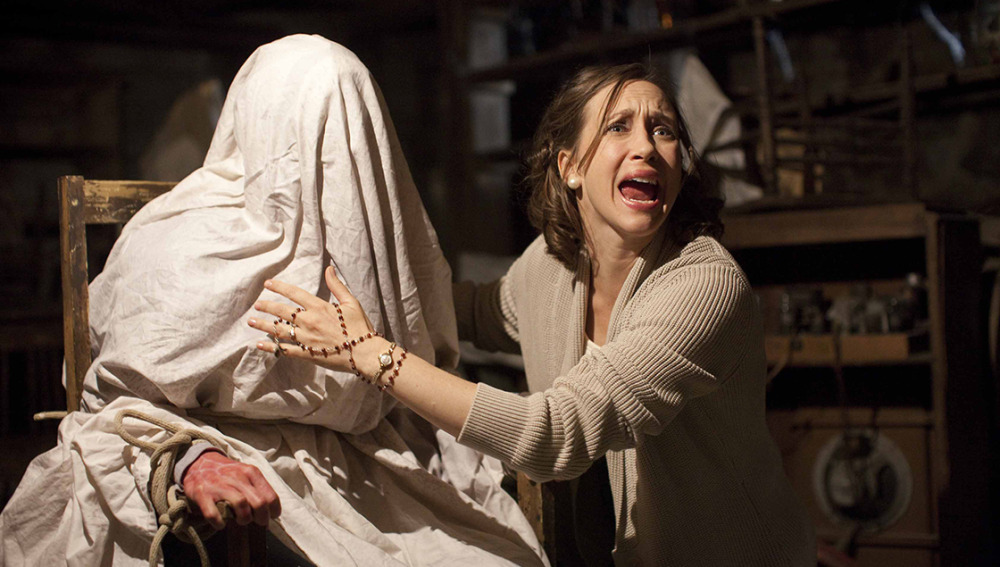 The Conjuring is an old-fashioned haunted house movie expertly made with plenty of jumps and scares to put you off sleeping for several days.

Plot: In 1970, paranormal investigators and demonologists Lorraine (Vera Farmiga) and Ed (Patrick Wilson) Warren are summoned to the home of Carolyn (Lili Taylor) and Roger (Ron Livingston) Perron. The Perrons and their five daughters have recently moved into a secluded farmhouse, where a supernatural presence has made itself known. Though the manifestations are relatively benign at first, events soon escalate in horrifying fashion, especially after the Warrens discover the house’s macabre history.

Review: I don’t mind saying that I consider James Wan a modern master of horror; sure he’s done action with Fast 7 and Death Sentence but horror is definitely his bag and if you’re good at something then why stop?

When I first saw trailers to The Conjuring I thought it looked lame but I would be proven mistaken as I ended up yelping like a little girl at various points. Although it is technically a haunted house movie, it still manages to ratchet up the scares and goes in directions you maybe wouldn’t expect.

The use of sound is something Wan is an expert with as it’s all about the noises you hear in the house and background that makes it so damn freaky. Then you’ve got Anabelle who is the creepiest looking doll ever; although she doesn’t play a big role in terms of the story, she (it?) still sends chills up the spine when you see her.

It’s very difficult to make a movie like this scary as we’ve seen it before a million times but James Wan and co. do a fine job and keeping you on the edge of your seat until the very end.

The cast are all excellent in their respective roles and I particularly liked Vera Farmiga as Lorraine Warren and Patrick Wilson as Ed Warren. Based on their real life counterparts they brought great empathy to their characters and what freaked me out even more was how much of the movie came from the true story.

I specifically remember watching a documentary about this once and you heard all the birds swarming around the house just like in the finale of the movie. Knowing a tale like this is inspired by true events definitely adds to the brown pants factor.

I really liked the music score too which was ominous and threatening; it built up the tension to almost unbearable levels and I wouldn’t want to listen to it in the house alone.

Overall, The Conjuring is an old-fashioned haunted house movie expertly made with plenty of jumps and scares to put you off sleeping for several days.