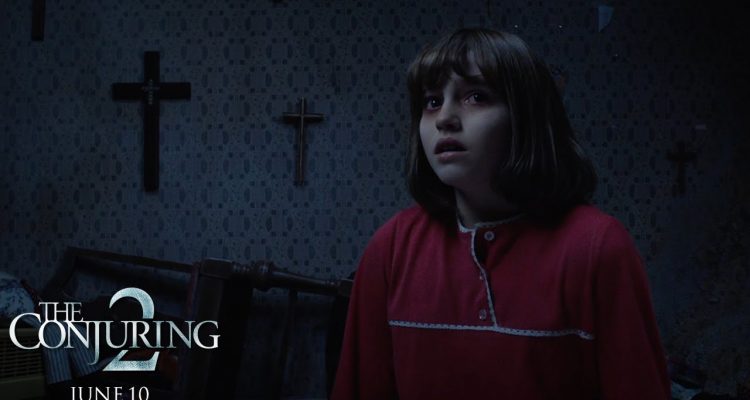 The Conjuring 2 is genuinely creepy with a haunting music score and excellent performances; you’ll be hard pushed to find a jumpier time at the movies this year.

Plot: In 1977, paranormal investigators Ed and Lorraine Warren travel to London, England, where single mother Peggy Hodgson believes that something evil is in her home. When Peggy’s youngest daughter starts showing signs of demonic possession, Ed and Lorraine attempt to help the besieged girl, only to find themselves targeted by the malicious spirits.

Review: I finally got around to see The Conjuring 2 last night as I’d been looking forward to it for a long time; I’m very familiar with the real life story of The Enfield Poltergeist and I am incredibly impressed at how faithful this story is to the ‘true’ tale. There were lines of dialogue which I knew were coming like “I’m not a Heaven man” which were taken straight from the real life tapes. This made things so much more terrifying when we know that it’s based on (allegedly) real events making The Conjuring 2 easily the scariest movie of the year.

Like the first Conjuring and The Insidious series director James Wan let’s us get to know our characters and genuinely care for them. It’s very refreshing to actually care about people in horror movies rather than just having disposable teens who are waiting to be killed by a masked madman. As I said in my review of the first Conjuring, I think Patrick Wilson and Vera Farmiga are fantastic in their roles as Ed and Lorraine Warren and we really get to know them better in this movie.

I liked also how the story wasn’t afraid to question whether this haunting was indeed a hoax which was something I’ve wondered for a while. FYI there’s a documentary on YouTube which you should check out called The Enfield Poltergeist and it tells us all about the true tale which is every bit as fascinating as the movie.

The music score was unbelievably creepy with ethereal choirs and a genuine sense of dread which keeps you on the edge of your seat.

The demonic looking Nun looked like Marilyn Manson and provided the best jumps throughout the film… and there were many. You’re never at ease, wondering what nightmare is going to come to life next and the camera doesn’t cut away when you think it will keeping the scares unpredictable.

*Spoiler alert* during the scene where Lorraine is having a vision of the Nun and her daughter is in the house there is a book case in the background with random letters but they grabbed my attention and I realized that they spelled the name of the demon by the end of the movie.

The Conjuring 2 wasn’t perfect though; I found it far too long and they could easily have chopped 15 minutes from the runtime. I also thought the Crooked Man was a bit too silly and I don’t remember anything like that from the true story but I guess it was added for cinematic value.

Overall, The Conjuring 2 is genuinely creepy with a haunting music score and excellent performances; you’ll be hard pushed to find a jumpier time at the movies this year.