An all-boys school becomes a battleground of students versus headmaster when one student stands up against the tyranny he believes the student body is facing against the headmaster and his chosen few acolytes.

Soon after his mother dies of cancer, freshman Jerry (Ilan Mitchell-Smith from Weird Science) joins the Catholic all-boys high school Trinity, which is being run by the manipulative Brother Leon (John Glover), who plays mind games with his students. A brotherhood of elites known as the Vigils play a power game against Brother Leon, and the leader of the Vigils – a dangerously morose and bored kid named Archie (played by Wally Ward [Langham]) – has pegged several kids for severe treatment simply because the Vigils demand certain sacrifices every term of the school year. When Brother Leon hatches a plan to boost the revenue of the school by having every student sell a collective total of 20,000 boxes of chocolates this year (which is twice the amount sold the previous year), it becomes imperative for each and every student to sell their share of chocolates (50 boxes per student), but the Vigils undermine him by forcing certain kids to refuse to sell any boxes. Jerry, who was chosen for the experiment, goes above and beyond the “assignment” and continues to refuse to sell any chocolates for the rest of the year, which not only undermines Brother Leon’s grand scheme and supposedly “infects” the minds of other students to follow his suit, but it cuts into the reputation of the Vigils, who believe that he’s defying their authority in the school, which puts their reputation at risk. Jerry becomes a symbol of defiance at his school, and he’s relentlessly bullied and harassed for taking a stand again school corruption. Who will win the “chocolate war?”

Radically subversive and fascinating, The Chocolate War was based on the controversial young adult novel by Robert Cormier, who also wrote the book I Am the Cheese, which also inspired a motion picture adaptation. This particular film – directed and adapted by actor Keith Gordon – hits a home run with its ultra cool dream-like pallet, which puts the audience squarely in Jerry’s mind, and it digs its heels deeply into his world and feels immediately genuine. The song soundtrack features great new wave hits from Kate Bush, Yaz, and Peter Gabriel. Essential stuff. Also starring Adam Baldwin, Jenny Wright, and Doug Hutchinson.

MVD Rewind Collection has just put out a very welcome Blu-ray edition of this title, which was previously released on DVD from MGM. The high definition transfer sparkles and is a clear upgrade from the DVD, and includes some archival bonus features, including a commentary by Keith Gordon, and interview with Gordon, and the trailer. Also included is a mini poster. 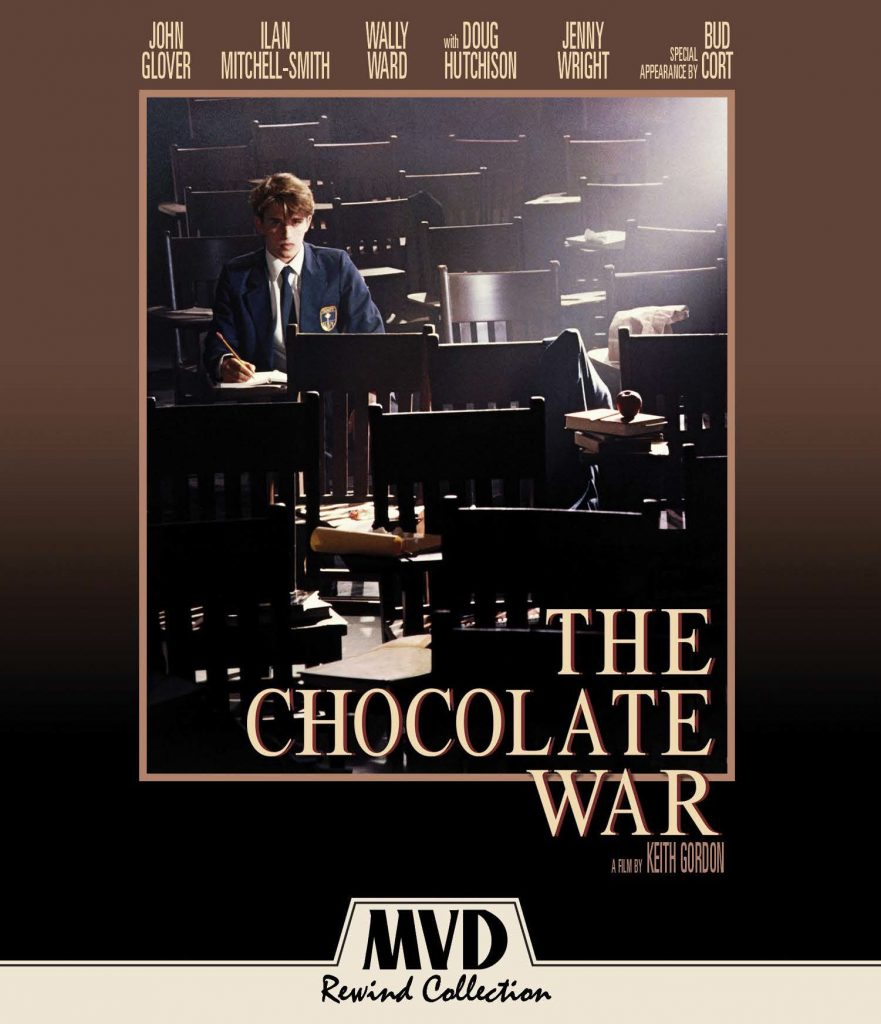