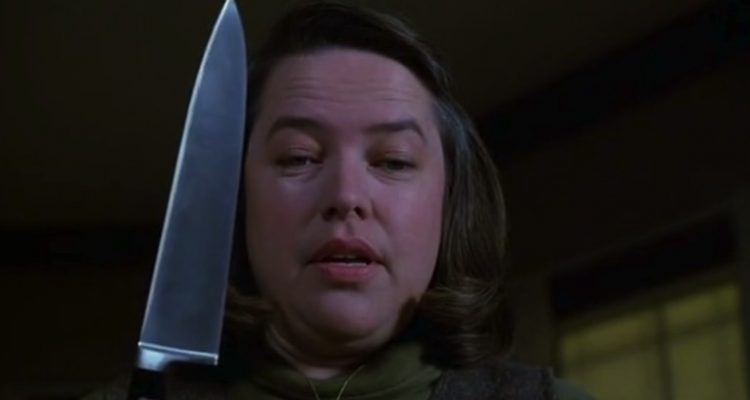 I have a confession – I am a huge Stephen King fan. I have almost all of his books in hardcover (I chose not to buy Faithful or Hearts in Suspension – mostly because they weren’t really works of fiction and they didn’t feel like Stephen King books).  Likewise, I have gotten at least one version of all Stephen King adaptations to either television or movies (I don’t buy all versions, therefore staying away from terrible mistakes like the Salem’s Lot remake). Here is my list of the ten best Stephen King adaptations – note that when I say “adaptations” that doesn’t necessarily mean they are the closest to the story – but these, in my opinion, are the best movies made based on a Stephen King story.

I’ve always been a fan of this story, it usually hovers close to my list of top 10 Stephen King books, so it makes sense that it would make my list of adaptations as well.  Timothy Hutton is brilliant in the duo role of the protagonist and the bad guy, and Michael Rooker does a nice turn in a “normal” role as the sheriff of Castle Rock. The story is pretty unique, and the movie does a good job of staying close to the source material.  I don’t think the movie gets enough credit for how genius the concept is or how great an acting job Hutton did in the flick.

This one usually ends up on a lot of top ten lists for coming of age movies and with good reason. The four youngsters, Wil Wheaton, River Phoenix, Corey Feldman and Jerry O’Connell, are well cast as four friends out to see a body run over by a train. The real winner in this one is Kiefer Sutherland who does a really nice and nasty turn as the town bully who is also looking for the body – I always remember the scene with using the baseball bat on the mailboxes. Not a typical King horror movie but it resonates with passion and feels extremely real; I’m sure Mr. King took details of his childhood to craft the story. Like The Dark Half, it also is extremely close to the source material, which is a plus.

When I first watched Carrie, I thought I would hate it – Carrie White is supposed to be a plain, frumpy girl and Sissy Spacek is anything but. However, in Brian DePalma’s masterful hands, the plot plays out with style and entertainment, taking what is a tragic story and injecting some true horror touches to it, none more so than that freaky ending. Spacek equates herself well in the title role and proves she’s able to elevate the role and still bring the pathos of Carrie White, but Piper Laurie is magnificent as her mother, playing her over-the-top with zest and zeal.  Carrie isn’t one of my favourite Stephen King works, but this movie is definitely one of my favourite adaptations.

I’m generally not a David Cronenberg fan – his style of body horror doesn’t appeal to me. However, I have to applaud his very straightforward adaptation of one of King’s best novels. The storyline is fairly close to the book, and Cronenberg masterfully plays up the unfolding horror surrounding John Smith as his telepathic power forces him to assume a role he doesn’t want to take. Christopher Walken deserves a lot of credit for his job playing the everyman Smith, and Martin Sheen is fantastic as the villain about to start World War III. Can’t forget the part with the deputy and his attack on Alma the waitress – that scene stuck with me to this day.

Rob Reiner is awfully good at Stephen King adaptations. Not only did he helm Stand By Me, but he is also responsible for this adaptation. While some of the gore is missing (Annie amputates Paul Sheldon’s foot in the book, whereas she “only” breaks it in the movie), Kathy Bates is extremely deserving of her Oscar for playing the unhinged Annie Wilkes. On the other hand, James Caan doesn’t get enough credit for playing the first arrogant and later terrified Paul Sheldon.  This is one of those stories that starts out innocent and the terror increases by the minute and Reiner escalates the mounting tension beautifully throughout the film.

Based on the novella “Cycle of the Werewolf,” this movie is one of the great 80’s horror flicks. Werewolves have always been my bag, and despite the brevity of the source material, the movie does a good job of injecting horror into the film while remaining close to the original story. Corey Haim was great as Marty, the kid in the wheelchair and Gary Busey was actually coherent as his uncle Red. The true star of the movie is the werewolf though, and there are a number of memorial scenes with it, none more so than the search in the woods that results in the werewolf using a bat on one of the hunters! There’s also that dream sequence in the church that is seriously probably the scariest werewolf scene ever committed to film.

Despite having little to do with the original story (other than some of the character names and a rather loose nod to the plot of the film), I think this is one of those rare movies that can stray from the source material and still be great. Arnold Schwarzenegger plays the square-jawed hero as only he can, and Richard Dawson as Killian was a revelation, embodying the energetic showmanship of a game-show host while gleefully sending people to their deaths. The Stalkers were all colourful and memorable, and the action was pretty fantastic with the fights between Richards and the Stalkers being the highlight.

The Green Mile is one of those stories that has no right working but somehow does. The story jumps between fantastical and realistic with the grimness of death row working in tandem with the extraordinary John Coffey and his mouse, Mr. Jingles.  The execution of Delacroix is just as horrifying as the storyline as is the frustration and sadness you feel with Coffey’s final fate is sealed. The entire cast is brilliant with Michael Clarke Duncan, Tom Hanks, and David Morse particularly standing out.  A movie both uplifting and depressing, it is one of King’s best and deepest storylines, and Frank Darabont is at his best when he brought this to the big screen.

Jack Nicholson has won a few Oscars, but one of the performances he definitely should have won one for is The Shining. Another movie that only has a passing nod to the original (something King was not happy about), Nicholson is at his scene-chewing best, playing the rapidly unwinding Jack Torrance. Conversing with ghosts while simultaneously questioning his wife’s sanity, Nicholson’s performance is my all-time favourite for any King role. Stanley Kubrick is terrific in telling this story, with his cinematography of the bleak Colorado surroundings a perfect backdrop for the dissolution of the Torrance family in the Overlook. To this day, I still remember the blood rushing out of the open elevators, and the woman in Room 237 is probably one of the most frightening ghosts ever in a film.

Big surprise, right?  Who would have thought that the best Stephen King movie would be a drama? Probably the best prison movie ever, the story dips and turns, taking a story of wrongful incarceration (or was it?) and making it an uplifting masterpiece worthy of Frank Capra. Morgan Freeman deserved the Oscar for his role as Red (though how you would reward him and not Tim Robbins is a tough call), and the supporting cast is top-notch. The movie is probably one of the most faithful adaptations of a Stephen King story and hits all the top moments for the story, masterfully tugging at the viewer’s heartstrings while delivering one of the greatest comeuppances to a villain in film history. This one is not only the best Stephen King adaptations of all time; it’s probably one of the greatest movies of all time, period.