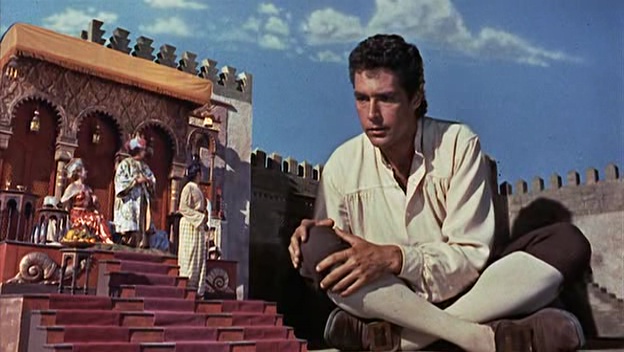 A fantastic and entertaining flick, that has the right balance of exaggerated humour and emotional weight.

Plot: After being shipwrecked at sea, Dr. Lemuel Gulliver embarks on a series of adventures through the fantastical islands of Lilliput and Brobdingnag.

Story: My only exposure to this story was the 2000s era Gulliver’s Travels featuring Jack Black, which I thought was just a disappointing, awful film.  I didn’t appreciate how truly bad it was, though, until I watched this film.  Not having read the Jonathan Swift story, I just knew that Gulliver was a giant in a land of tiny people. The actual story, as told partially in this film, is a lot more than that.

To be honest, I was extremely surprised how engrossed I got into the story.  It starts out a little rough, and for a while, I was wondering if both leads would continue on to be as unlikable as I found them to be in the beginning.  Luckily, that doesn’t last very long, and soon our hero is washed up on the beach and tied down (literally) by the tiny Lilliputians.  The story gets progressively outrageous, with the humour being both outright bizarre and hilarious.  The reason for the Lilliputians being at war with their neighbours is the most ridiculous thing I’ve ever heard of and had me laughing out loud, which is rare. When he travels to Brobdingnag, he’s now in the land of giants, and he has new worries to deal with. While the movie is undoubtedly over the top and can just be seen as fluff entertainment, there’s an undercurrent of a point being subtly made throughout all the shenanigans.

As for the actors, I think Basil Sydney stands out in the role of Emperor of Lilliput.  Sydney’s performance is on par with a part straight out of Monty Python, and his comedic timing was genius. Likewise, Grégoire Aslan was great as the bumbling, highly-suggestible King Brob of Brobdingnag. Kerwin Matthews is charming as the lead character, and while June Thorburn doesn’t do much other than either fight with or worry about Gulliver, she is such a stunning beauty, that I hardly noticed that she wasn’t really there except to be Gulliver’s love interest.

The effects by Harryhausen were terrific, even if this is one of the rare movies not stuffed with his stop-motion creations. In fact, only two creatures show up, a giant squirrel and an over-sized crocodile. Otherwise, it was just the size effects he was responsible for, and man, they are damn near seamless. A lot of it was just camera perspective where one person or object was farther in the foreground than the other (which was copied by Peter Jackson for the Lord of the Rings), but it’s so effective, you have to marvel at the simplicity of the technique.

The score was pretty on point as well, orchestrated by the great Bernard Hermann with the London Philharmonic Orchestra, with the title theme music being my favourite – it perfectly underscored the light hijinks balanced with the heavier undertones and dangers that Gulliver and Elizabeth face.

While it’s not your conventional narrative, The 3 Worlds of Gulliver is a smashing fun flick that has more substance than you might believe at first glance. I recommend it, especially if you’ve seen the latter-day Gulliver’s Travels and want some mental floss to convince your brain that this wasn’t such a bad story after all.