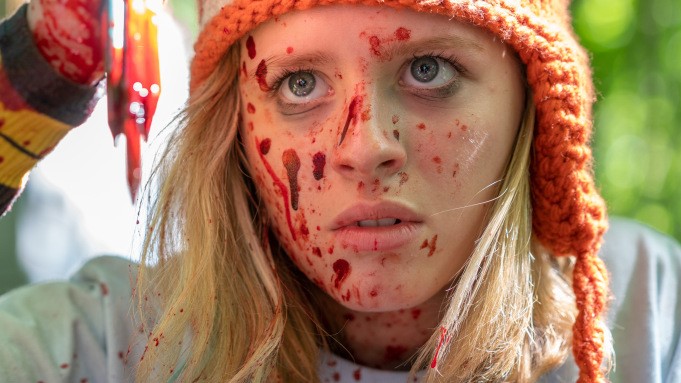 Well-directed with strong performances and surprising levels of violence, BECKY is sure to please fans of darker films.

Plot: A teenager’s weekend at a lake house with her father takes a turn for the worse when a group of convicts wreaks havoc on their lives.

That is how they are marketing BECKY, the new gore-soaked thriller from directors Jonathan Milott and Cary Murnion (COOTIES). It is a solid “elevator pitch”, after all. For those that don’t know, an “elevator pitch” is if you had to sell someone on the idea of a film in the time it takes to go one floor on an elevator. It has to be quick and to the point. So yes, BECKY is an “an ultra-violent HOME ALONE. . .” in the sense that it features a child battling adult intruders with traps and makeshift weapons. Reducing it to that simple four-word description does it a big disservice though. It conjures up the idea that the film will be ironic in tone. Something for the “it’s so bad it’s good crowd”. BECKY is so much more than that.

The film, which tells the story of a family at an isolated location who are terrorized by a group of white Supremacist prison escapees, wears its genre trappings on its sleeve. The film has the kind of set up we’ve seen before in countless other genre movies. The shift comes however when the racists quickly realize they may have bit off more than they can chew when the family’s teenage daughter, the titular “Becky” (Lulu Wilson from Netflix’s THE HAUNTING OF HILL HOUSE), decides to fight back with a shocking level of brutality. It’s more Sam Peckinpah’s STRAW DOGS than something like the original LAST HOUSE ON THE LEFT. The filmmakers never lose sight of the fact that the film needs more than blood to matter. They give the story time to build and let us get to know Becky and her family before everything breaks down. They understand that the audience must be invested in the characters for anything in the film to matter emotionally. This commitment to character development and buildup along with beautiful cinematography from Greta Zozula (NEVER GOIN’ BACK) clearly show that BECKY is more than a schlocky piece of trash cinema looking to titillate people looking for the next big “midnight movie”.

BECKY is also aided by its strong casting. To really begin discussing the cast though we must talk about Lulu Wilson’s portrayal of the title character. She is the focal point of the film and if she weren’t believable the whole thing would be soulless at best and an outright failure at worst. Wilson though, at age thirteen, is phenomenally versatile in the role. She handles the shift from a normal teenage girl to something much more sinister by the end of the film in a more nuanced way than some actresses would with twice her experience. It feels like seeing the beginning of an actress who is going to be a bigger star very soon.

Of course, next we have to discuss the person most of the film’s marketing has been based around, comedian and sitcom star Kevin James (HITCH) as the cold-blooded leader of the prison escapees, “Dominick”. It’s admirable that James wanted to take on such a dark villain role like this one. His burliness makes him an imposing figuring and he handles the physicality of the character well. He unfortunately just never quite completely disappears into the role. There are moments where you can’t help but see the “King of Queens” behind the rough artifice. That is not to say James is bad here, he’s actually quite good. He takes some big chances in BECKY and that should be applauded. It’s just that he brings a lot of baggage to the film that one serious role won’t be able to fully remove. I hope though that he continues to go for heavier dramatic work. This film shows he can handle it well.

James is supported in the role by former WWE wrestler turned actor Robert Maillet (PACIFIC RIM) as Dominick’s main muscle, “Apex”. As the character’s name implies, he is very intimidating and of course Maillet fits the bill for that easily. What is most surprising though is the emotional depth that he brings to the character with his performance. The script gives him a few really memorable scenes and he knocks it out of the park each time. A lot of people will see BECKY for Kevin James but of the antagonists, it’s Maillet who leaves the biggest impression.

Two other noteworthy members of the cast are Joel McHale (TV’s COMMUNITY), as Becky’s father, and Amanda Brugel (Hulu’s THE HANDMAIDEN’S TALE) as his fiancé. Both actors have turned in strong performances for years on the small screen in a variety of roles and here they continue to do great work as the passive victims of the escalating violent situation they find themselves trapped in. They never feel any less than fully authentic in their roles and they do a lot with what the script gives them. The sympathy they garner from the audience is essential in making the high level of violence that occurs in the film feel either appropriately horrible or justified depending on its intent at that point in the story.

Speaking of the violence in BECKY, I used the phrases “gore-soaked” earlier and while that is hyperbole this film is indeed extremely violent. When people get hurt here, it’s not shown in a sanitized way- it’s realistic and graphic. That is another way in which the film strives to elevate itself past people just looking for ironic enjoyment of a seemingly trashy and meta concept. There are no ridiculous gore gags played for laughs in BECKY. All the damage here is represented by top-notch practical effects by artists who clearly understand what wounds and body trauma actually look like. The violence is startling, but the film wants the audience to be confronted by the grisly aftermath of its cathartic violence.

BECKY has so much unexpected nuance for, what is at its heart, a “revenge” picture and that ultimately makes it a more satisfying experience for the viewer. This film has come along at a time in history where smaller projects like this have more of a chance to be noticed that ever before and due to that fact not only will it have a VOD release but a theatrical run (including drive-ins) as well. So, if you like violent films or even just films with strong female leads than I can not recommend BECKY highly enough. See it any way you can. It’s not just “an ultra-violent HOME ALONE”. It is a legitimately great genre film.

BECKY is in theaters, drive-ins, on-demand and digital – June 5th, 2020. Here is a list of the participating theaters: