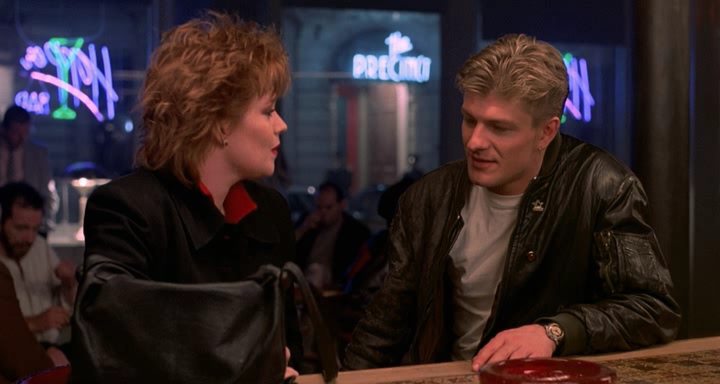 Plot: A crooked American businessman tries to push the shady influential owner of a nightclub in Newcastle, England to sell him the club. The club’s new employee and the American’s ex lover fall in love and inadvertently stir the pot.

Review: The jazz wafts over the airwaves and somehow draws out young Brendan (Sean Bean) from his lackadaisical lifestyle. He drifts, looking for purpose, and boy does he find it: He answers an ad in the paper, a cleaning boy job at a nightclub in the heart of the jazz district in London. The boss of the club (played by Sting) takes a casual shine to him because he knows his jazz. Brendan’s first task is to go to the airport to pick up a band from America, a jazz group that Brendan has heard of. He picks them up, takes them to their hotel, and goes to a local eatery to eat some lunch. While he’s there he hits on a waitress named Kate (Melanie Griffith), who likes his approach. As he eats, he overhears two thugs talking about murdering his boss, the owner of the nightclub. He takes this information very seriously and tries to tell him about it, but the timing is wrong, so he has to wait until the next morning to do it. This information is valuable, and after he relays the message it proves to be priceless information, and his boss is able to thwart the encounter, and as a reward he gives Brendan the keys to one of the thugs’ cars. Turns out that an American crime lord named Cosmo (Tommy Lee Jones) is in town and is trying to muscle in and force the sale of the nightclub, and another revelation is that Kate is Cosmo’s girl on the side. Brendan is suddenly smack in the middle of a complicated plot he couldn’t possibly understand, but now that he’s driving around in one of Cosmo’s thugs’ car, he and Kate have giant targets on their back.

A sexy, vibrant, and vital film noir infused with great style and cinematography by Roger Deakins, this first film from Mike Figgis remains his best work to date. The story and plot unfolds at a great pace, and the performances and setting are instantly intriguing. The characters become more engrossing as they become embroiled in bad situations, but it’s all handled expertly and unexpectedly. This movie has grown on me over time, and I am fully able to appreciate it now more than I ever have before.

Arrow Video has just released a gorgeous high definition Blu-ray / DVD combo pack of Stormy Monday, and it’s an essential release. First of all, the new cover artwork by Jacey is stunningly beautiful. Second, the audio commentary by Figgis is nicely calibrated, though he’s cut off at the end of the film mid-stream. There are some other bonus features, and the package itself is just beautiful.