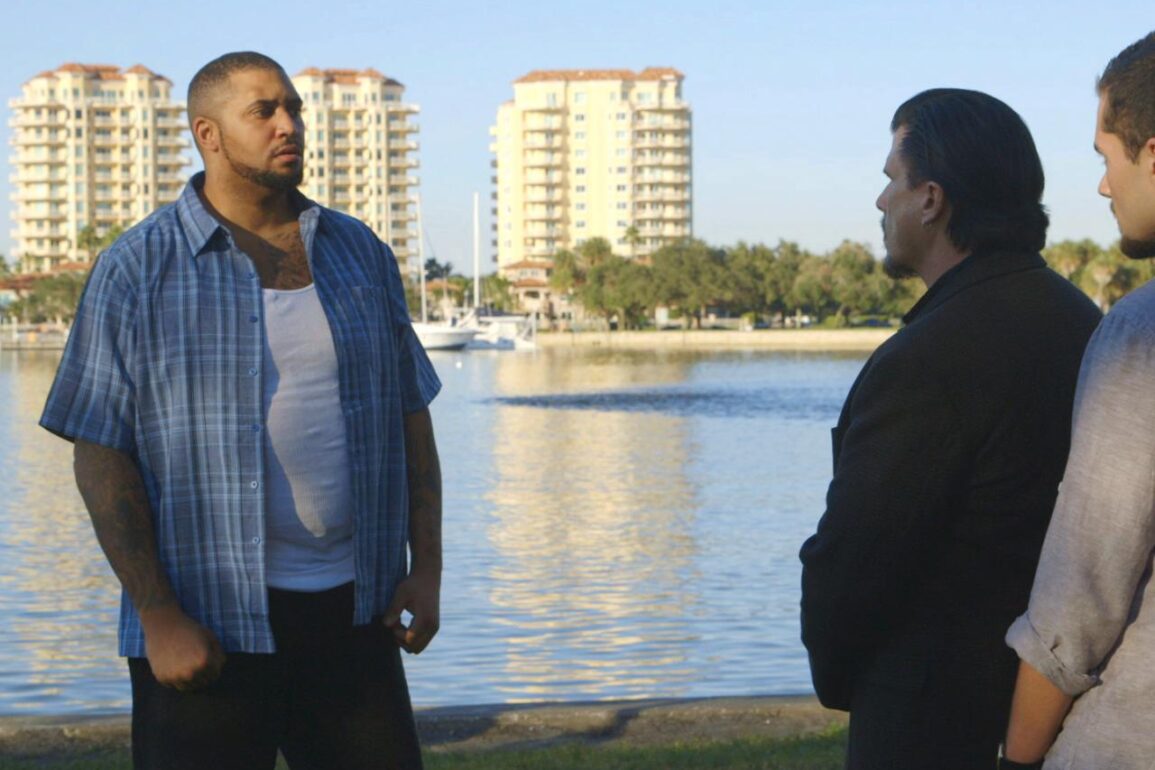 Review: Don “The Dragon” Wilson (The Bloodfist series) co-stars in a very different kind of movie than his usual forte in Paying Mr. McGetty, an action comedy from Traditionz Entertainment and Michael Baumgarten.  Starring R. Marcos Taylor (Straight Outta Compton), Paying Mr. McGetty is an intriguing combination of chase scenes, fighting and witty dialogue, often consisting of the occasional phone argument with a pushy boss and significant other, which should be very familiar to anybody in their thirties or above.  We are immediately introduced to professional assassin Shota Kabu (Wilson), a calm but ruthless figure who doesn’t need to say or do much to prove his level of “talent” despite doing a bit of each when needed.  Through various plot developments, he is put on the trail of Tyrell (Taylor), a hard working but unfortunate man who finds himself a target of a mob boss after a night on the town leads to an encounter with a blonde named Cecelia (Alissa Schneider, Wick City Rockabilly), who has her own motives.  With constant communication from his girlfriend Meena (Anita Clay, Crimson) and a pushy boss (Forbes Riley, The Last Supper), Tyrell is sent continuously on the move between work appointments, music production, pleasing his significant other in the south Florida setting, all while avoiding Kabu.  Plot twists and character development abound throughout, including a rather humorous few scenes set in a restaurant whose clientele consists entirely of hitmen, the ringleader of which is humorously portrayed by Paul Logan (Mega Piranha), and there’s also a quick cameo of Cynthia Rothrock (Lady Dragon).  Will Tyrell be able to make peace with everyone and, more importantly, can he make peace with himself?

While this idea is nothing terribly new, and has been done with more depth in other films, Paying Mr. McGetty certainly has its moments, and creates them with a relatively small budget.  While Taylor carries the movie with his wide range of acting ability and even the occasional martial arts display, the strongest presence is usually that of Wilson.  Since longtime action fans will recognize the name alone, “The Dragon” happened to set himself apart in different form than might be expected.  The Kabu character might not move the way Wilson’s characters did several decades ago, but arguably shows more comedic wit, timing and development than ever before.  The fight scenes tend to run a little on the short side, and there’s not a whole lot of rhyme or reason to any kind of “difficulty curve” provided by any would-be threats of the two primary protagonists, save for simply adding more of them at once.  However, that is not particularly needed here, and in some ways adds to the comedic tone.  There are also some strong messages and themes regarding friendship, courage, hard work and the martial arts themselves throughout.  The overall concept is similar to such films as Lock, Stock and Two Smoking Barrels and Guns, Girls and Gambling, but the content is handled in much less gritty a fashion and with a more positive message involved.

Written and directed by Michael Baumgarten, co-written by Andrew Marsh.