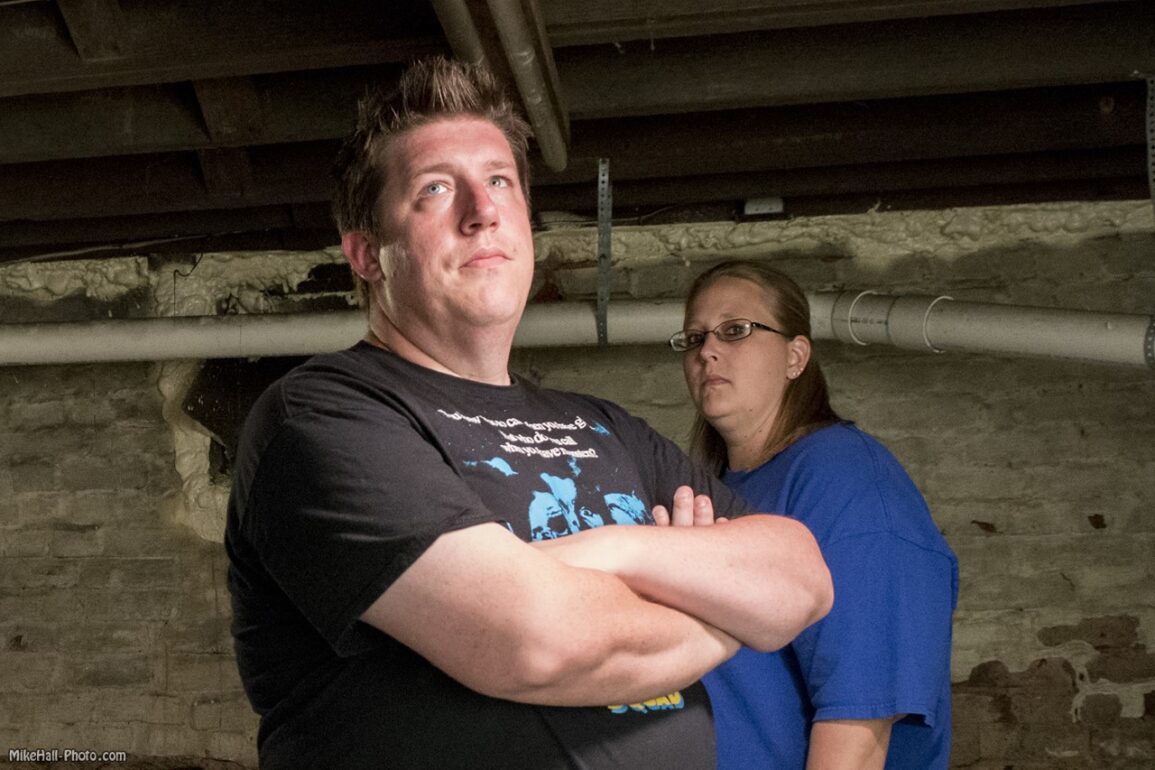 From hot genre label Dark Cuts comes a stirring volume of bloodcurdling horror from Blood Moon Pictures.  In the tradition of cult classics Creepshow and V/H/S, comes Volumes of Blood : Horror Stories – a collection of bleedingly original horror from some of today’s most gifted genre filmmakers, including Justin Seaman (The Barn), Sean Blevins (A Brush with Death), and John Mayard (Nearly Dead)!

A couple plans to purchase an old home, but would like one last tour before the closing. They’re guided around the estate by a creepy realtor that may have more in store than they bargained for. Searching floor by floor, they begin to discover the remnants of its sordid and terrifying past… A popular 80’s franchise gets a modern upgrade, but at what price? On Halloween night a teen left home alone meets a trick or treater that wants more than just candy. A door to door insurance salesman makes a Thanksgiving house call with monstrous consequences. Andrew and Sara are happily married and plan on spending some quality time together, but something sinister has other plans for their evening. Carol’s Christmas Eve turns into a fight for survival when a vengeful stranger isn’t feeling the holiday spirit. Lastly, a birthday party turns bloody when some unexpected guests drop by at the wrong time. Seven interwoven tales of terror, how many stories does your house have?

Volumes of Blood : Horror Stories out August 1 from Dark Cuts.

We spoke to producer P.J Starks about the movie.

Is an anthology movie more difficult to make than a traditional, one-yarn movie?

PJ: Absolutely. A feature narrative comes with its own set of difficulties, but you have the luxury of only dealing with a handful or character and a single story line. To put things in perspective my first horror feature had eight main characters and one story line to keep up with. Volumes of Blood on the other hand, had 30 main character and five narratives to facilitate. Then you throw into the mix five different directors, several different writers, different directors of photography and so on so forth. I’ve said a million times already that anthologies are logistical nightmares to produce, however, they’re also some of the most satisfying projects to complete.

Where do you find seven stories?

Typically, they’re concepts that I’ve come up with and either I write them or find another writer who is interested. In the case of Horror Stories, I conceived the overall story structure and then wrote five of the scripts and Nathan Thomas Milliner conceived and wrote the other two.

How does the process of selecting directors work?

With the first Volumes of Blood it was mainly me wanting to work with certain friends of mine who were also directors. With Horror Stories we went in the opposite direction by selecting directors who had made a name for themselves by writing and directing their own projects such as Justin M. Seaman who made The Barn; Sean Blevins who’d made several really cool horror shorts like A Brush with Death and Jon Maynard who directed Nearly Dead. Nathan Thomas Milliner had gone on to write and direct the fan film The Confession of Fred Kruger, which I also produced, and it got tons of great feedback. At first he wasn’t sure if he wanted to return to the franchise, but because Eric and I were restructuring how we did things, he returned as a writer/director. We knew that by bringing in outside talent, they’d each bring their own style and that could help give the individual segments their own tone while also keeping the continuity and atmosphere of the overall film.

I believe you financed the film through crowd-funding?

The first film was paid for through crowd-funding and a couple of fund raisers. We went in a completely different route to finance the sequel. We reached out to local and regional businesses and sold them on the idea of product placement in the film. Eric Huskisson, my producing partner, and myself had no idea if it would even work. It was a completely different approach than we’d ever tried before. We were very fortunate the idea paid off and were able to come in over what we budgeted the movie for. That of course led to even better special effects and production value.

Anything you would’ve liked to have accomplished with this one but didn’t? (and will hopefully get to do on the next one)

Is it a perfect film, absolutely not. Nevertheless, we accomplished exactly what we’d hoped to and more in a lot of ways. First and foremost, we wanted to prove to ourselves that the reaction to the first film wasn’t a fluke and thankfully the reviews and things for Horror Stories have proven that to us tenfold. We also wanted to expand on the VOB universe with more colourful characters, strong narratives with solid acting and just do things a little bigger and little better than the predecessor. I honestly feel like we accomplished those goals. We set our standards high when it comes to creating the films and do the very best we can. But I reset my standards to very low when it comes times to release the film. That helps make the good more incredible and the bad a lot easier to process.

How many punnets of corn syrup did you guys go through?

Hilariously enough one of the critiques that stuck with me after the release of the first film was that some didn’t think the film was gory or bloody enough for something called Volumes of Blood. Going into the sequel I said from the start the kills needed to be gorier and more elaborate. Enter Cassandra Baker, our Special Effects Supervisor. She acting got brought onto the project after we lost of our first special effects person following the first sequence shoot. She had about a month to process our demands, but did so incredibly well and her work on the project shines bright. The first sequence she came into involved a severed head, multiple stabbings, a blood explosion, a hatchet to the forehead, sitting on a butcher knife and more. It was a doozey and has easily become the favorite of all the kill sequences in the film. Cassandra is insanely talented and I’d recommend her to anyone. Horror Stories alone added 24 on screen kills to her resume with a total of 30 deaths. Not including various corpses and a few other minor special fx. I say all that to say this, there’s absolutely no way that anyone can complain about a lack of blood. In one sequence alone we used nearly twenty gallons.

Do you have a favorite segment?

My favorite segment is “Feeding Time”, directed by John William Holt. It’s hard not to be biased since I came up with the story and co-wrote it with Jason Turner. It has one of my favorite characters in the film, Boone. He’s a shitty insurance salesman who’s also the worlds nicest guy and he’s placed in this very awkward and impossible position to help a terrified girl. Of course some very nasty things happen, but it has one of my favorite twists. It’s incredibly well directed. Caleb Shore and Shelby Taylor Mullins worked well together and they’re just solid, solid talent. Caleb nails the role and Shelby brings this innocence and evil to hers that’s just mesmerizing to watch. John uses this fantastic color scheme where it juxtapositions from these soft, warm colors to these very dreary and harsh grey and blues. I just love it.

What do you think your film offers that other, past horror anthology flicks haven’t encompassed?

It offers continuity in tone and interconnectedness of story that modern horror anthologies have sadly lost over time. Nowadays, horror anthologies seem to be random shorts found off YouTube and slapped together to create a feature film. I wanted to get away from that feeling all together. I wanted to create an experience that felt like one whole story, even though it was comprised of multiple sub-genres. Don’t get me wrong, there are some good anthologies being made like V/H/S 2 or Southbound. But we wanted to bring back the strong storytelling and the fun of Trick ‘r Treat and that hasn’t been done since that film. For all intents and purposes we seemed to have succeeded in those departments.