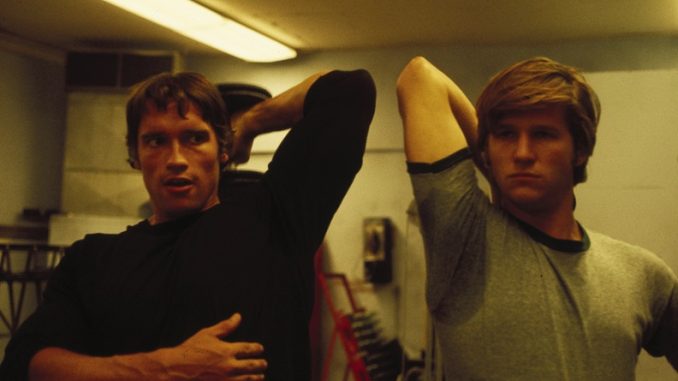 Great performances and chemistry. The Blu-ray from Olive looks better than the MGM DVD.

Plot: A syndicate wants to buy a whole district to rebuild it. They’ve bought every house except the small gym “Olympic”, where Mr. Austria Joe Santo prepares for the Mr. Universe championships a month ahead. The rich sunny-boy Craig Blake is brought in by the syndicate as a dummy to buy the gym. But then he starts to like the people and falls in love with Joe’s friend Mary Tate.

Review: Some sleazy businessmen hire a rich, bored playboy named Craig (Jeff Bridges) to get the feel of a local gymnasium to weasel the owner (played by RG Armstrong) out of selling the place cheap so that the land can be used in a development deal. As soon as Craig walks in the gym, he feels a vibrancy he hasn’t felt before: He’s immediately attracted to the spunky receptionist Mary (Sally Field), and the local celebrity bodybuilder from Austria Joe Santo (Arnold Schwarzenegger in an early role) who regularly works out there takes a shine to him. Suddenly, Craig has ingratiated himself to the folks who circulate around the gym without even realizing what’s happening. He falls in love with Mary and befriends Santo, and his whole life turns upside down as the guys who’ve hired him start to muscle in on him and his friends at the gym. As the Mr. Universe competition approaches, Santo becomes ultra focused on the big win, but as Craig and Mary’s relationship becomes complicated, Craig has to figure out how to navigate his feelings before he ruins his friendships and breaks Mary’s heart.

Before Schwarzenegger was a massive movie star, he appeared in a few smaller films in supporting roles, and he’s a real natural here in a genuine, star-making light. As Santo, he’s likable, sexy, and pretty hilarious as he tries to teach Bridges how to work out. Bridges and Field have great chemistry, and while the movie feels a little dated to the ’70s with a hokey story and twangy country western-styled bluegrass music, the movie is a great little time capsule for these three stars while they were young and just starting to spread their wings. Director Bob Rafelson just lets his camera capture some great moments.

Olive Films has just released a nice looking Blu-ray of Stay Hungry, and it’s a marked improvement over the previous DVD from MGM from over a decade ago.

Schwarzenegger completists should add it to their collection.