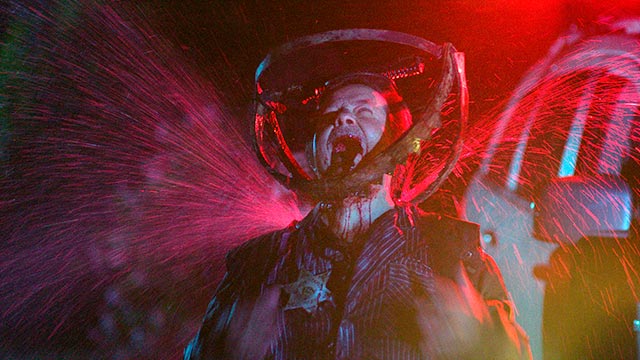 Sloppy editing and lopsided direction mar the film for horror fans but there are strong performances and an intriguing story.

Plot: A mother must protect her family on Christmas Day from a demented stranger who is hell-bent on tearing them apart.

Review: A Christmas gathering for a highly dysfunctional family in Australia goes completely sideways when a mysterious uninvited guest shows up at their doorstep and proceeds to dismantle their sense of security over the course of the evening. The matriarch (played by Dee Wallace) – at 60 – has invited all of her grown children and their families for this one last gathering, as she has sold the house and plans to travel the world, but she’s been harboring a secret for 20 years: She once had an abortion she told no one about, and as it turns out her aborted baby survived unbeknownst to her and was raised by an extremist who doctored vengeance in the child’s heart. Her long lost son – the homicidal guest at the doorstep – has come home to reclaim his mother … and damn any of his brothers and sisters if they get in his way.

A grim, but original slasher horror film with a seasonal atmosphere, Red Christmas has the trimmings to be a perennial horror film for the holidays, but aside from convicting performances and an interesting premise, the execution of the movie is a little lopsided and actually lets horror fans down with confusing editing and disorienting direction by Craig Anderson. Anderson is fully in command of the script (which he wrote), but as both the director and editor he makes too many missteps with the violence and action with not enough coverage and too many cutaways. There were whole scenes where I didn’t know what was going on, and with the entire movie taking place in one setting I was confounded by how so many characters could be herded in ways to give the killer character so many advantages. When the killer begins his systematic slaughter of the family, the camera was never where it should have been, and most of the gore shots were sloppily framed and edited. The movie still has a grim tone and a bleak dénouement, but what should have been a gut punch of a horror movie ends up feeling like a freshman effort without the desired effect. Too bad.

Artspoitation Films has released Red Christmas on DVD and Blu-ray, and is packed with special features, including a filmmaker commentary, interviews, and a blooper reel.