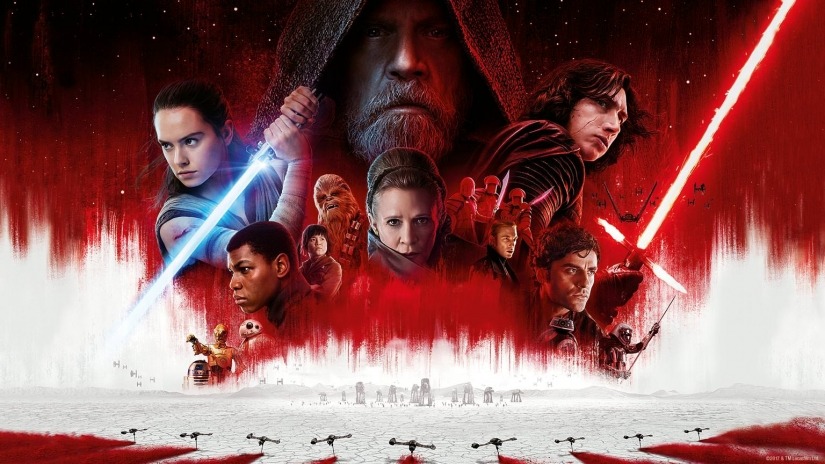 The Last Jedi is a crushing disappointment that destroys one of cinema’s most beloved heroes. Nothing in the movie mattered after Leia in space; some of the special effects are impressive but I think I hate this movie more than any other Star Wars movie. I mean, the prequels sucked but they didn’t make me angry the way this did. Episode 9 has its work cut out for it.

Plot: Rey develops her newly discovered abilities with the guidance of Luke Skywalker, who is unsettled by the strength of her powers. Meanwhile, the Resistance prepares to do battle with the First Order.

Review: It’s funny, Disney didn’t invite me to a press screening of The Last Jedi movie so I imagine after reading this review I won’t be on their Christmas card list either but I am now officially no longer interested in the future of this series.

When Mark Hamill said in an interview a few months back about how he initially didn’t like the direction Rian Johnson was taking the character of Luke Skywalker I started to worry about The Last Jedi. To be honest, I was already worried as soon as Johnson signed on as director as I personally hated Looper and thought it was boring and dumb so bringing him into this universe was a bad idea.

Even after all the trailers for this movie I just couldn’t get excited about it as I saw nothing that really grabbed me; all I saw were Porgs and a story that didn’t look particularly interesting.

Nearer the release date however, I was hearing great things so I went in last night with an open mind not really sure what to expect. I really wasn’t expecting to find the movie so embarrassingly bad where it felt more like a parody than Star Wars. As with every Disney movie these days it has far too much humour and like Hamill said previously, I hated what they did with Luke.

When Luke finds out Han is dead you would think he would grieve for his best friend and go to his sister but nope. It still bothers me that we’ll never have a scene with Han, Luke and Leia together as those characters embody Star Wars for me, even now.

I know The Force Awakens had its flaws but both that and Rogue One were far superior films to this disjointed nonsense.

The narrative just lacked any sense of urgency with characters doing things just to stretch out the runtime but I literally hated nearly every aspect of the story and script.

Luke didn’t feel like himself at all where at the end of Return of the Jedi he was a more serene monk-like figure who was in tune with the Force. I won’t go into any spoilery details but so many aspects just pissed me off like the fact that he is now a complete coward who behaves like a petulant 12 year old was my biggest gripe.

At one point he winks at another character and came off more like a cowboy rather than a controlled Jedi. He didn’t feel like the same person we loved from the original movies and what he does with the lightsaber when Rey hands it to him immediately irked me.

There just wasn’t enough time with Luke training Rey in the Force and now suddenly she is a Jedi after five minutes?

By the end of the movie the majority of the story is at an end and there is no mystery or excitement for Episode 9.

I thought the opening scene was quite spectacular with some impressive visuals but the movie lost me from one particular point which involved Leia and space… I’ll just leave it at that but the guys next to me looked at each other and said “What the fuck?” which I found myself saying at various intervals.

I was surprised with what they did with some of the main characters and especially some who were underused (Snoke and Phasma for one). Rey, Kylo Ren and Finn just aren’t particularly interesting and our two new heroes have barely any character development.

Finn is sent with new girl Rose on a mission to find some guy to do something else and it felt like video game plotting. I didn’t care what happened to either of them and they did nothing particularly exciting with Rey either; we finally find out about her family and like every other aspect it’s just underwhelming.

Kylo Ren was mildly more interesting and I liked some of his scenes especially the ones with Snoke but the ones with he and Rey communicating in the Force almost felt like they were in a chatroom for Force users. “So… whatcha doing?” “Why’d you kill your dad?” “I made you a bird” “Why are you naked?” and so on.

It also just seemed to go on forever; the entire Canto Bight sequence was a waste of time and could have been removed completely and it wouldn’t have impacted the movie in any way. BB-8 is now a slot machine? Then having him pilot the Scout Walker in the finale? Give me a break.

To this day I can quote pretty much the entire movie of Return of the Jedi (in the Emperor’s voice) but I thought the script to this movie was mostly terrible and there isn’t a single line of dialogue I can remember.

One minor gripe which most people probably wouldn’t care about is that it wasn’t shot like a Star Wars movie; during a climactic lightsaber battle what’s with The Matrix-style slow motion effects? Where were the Star Wars scene transitions? You can rag on The Force Awakens all you like but it at least looked and felt like a real Star Wars movie.

On the plus side I respect that they did something very different from what has come before; this isn’t a remake of Empire Strikes Back (despite a few similarities) and it is quite surreal with some impressive and imaginative visuals.

John Williams score was better than TFA and had a few nice nods to the original trilogy as well as bringing in the new themes.

Johnson certainly took some risks so he deserves a tip of the hat for that but he made so many choices I hated that I now have zero interest in this potential new SW trilogy he’ll be involved with.

Overall, I am still trying to process The Last Jedi but all I know is that I was practically screaming to get out of the theatre at the end with no intention of ever sitting through it again and that’s a first for a Star Wars movie. Hell, I even saw the prequels multiple times. I’ve seen a lot of fan reaction so far has been negative and rightly so as I thought this was just overlong, lacking a decent narrative and I don’t even care what happens in the next film.