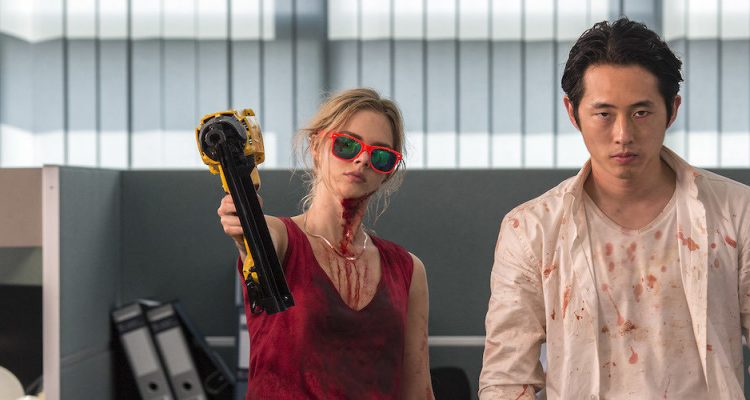 Yuen and Weaving are attractive and competent in their roles. The score by Steve Moore is a highlight however, it’s garish, cold, and without much merit. It doesn’t even work as escapism.

Plot: A virus spreads through an office complex causing white collar workers to act out their worst impulses.

Review: Rising attorney Derek Cho (Steven Yuen) finds himself at work during a viral outbreak of a nasty virus that completely strips away a person’s inhibitions and turns them into raging, violent killers, rapists, and caterwaulers. Just before becoming infected and the entire building and all its inhabitants are locked down on quarantine, Derek is fired as a scapegoat over a discrepancy, and unwilling to just let it lie, he intends to work his way to the top brass of the company (a scumbag suit surrounded by protection on the top floor of the building), and with his new raging infection, Derek has plenty of fuel to keep him adrenalized as he kills his way to sweet vengeance. Teaming up with a young woman (also infected, played by Samara Weaving) who has a grievance with the law firm, Derek and his new sidekick slash, bash, and crash side by side as the top brass offers a hefty reward bounty on Derek’s head if anyone can stop him from making it to his office.

Comparisons to The Purge by other reviewers are fairly accurate, but where The Purge movies are rooted in political satire and commentary, Mayhem is bereft of any depth or forethought. It’s a fairly simple free-for-all, high body count slaughterhouse of a movie, and billed as a dark comedy, my personal tastes found it without much merit, comedy, or even escapism as I couldn’t identify with the two main characters. Screenwriter Matias Caruso’s story goes through the motions in an unappealing fashion, and though the two lead stars are attractive and competent in their roles, I’m not really sure who this movie is for. It’s aggressively violent, cold, and garish. Joe Lynch (Everly, Wrong Turn 2) isn’t able to find a balance of panache and wicked satire amidst the mayhem.

Mayhem will be available on DVD, Blu-ray, and Ultra High-Definition 4K/Blu-ray combo on December 26th.