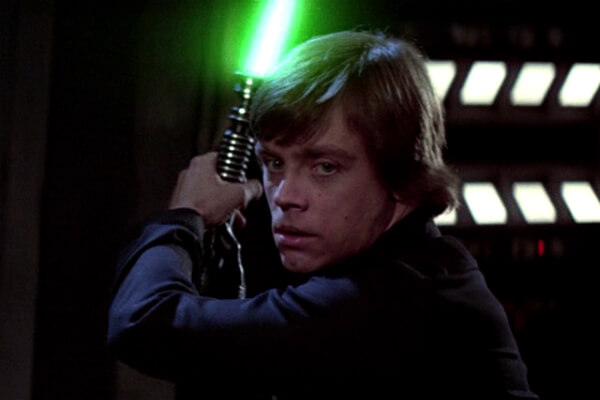 It may be the weakest of the original trilogy but Return of the Jedi is arguably my favourite for some reason. The Emperor is my all-time favourite movie character and his scenes are literally electrifying.

Plot: The final battle between good and evil in the Galaxy comes to an epic conclusion.

Review: So we’re finally at the end of this journey through the Star Wars universe, but to some this was the beginning of the end of the “Good” Star Wars movies. I can understand why a lot of people dislike Jedi; the Ewoks, etc but I actually really enjoy them. As I mentioned in my Empire review, Jedi really focuses on the themes of nature vs. technology. The Ewoks are the nature loving tribe’s people who are invaded by the technological Empire and hilarity does not ensue.

When watching these films, you have to remember that as a child the Ewoks were awesome; I even enjoyed their individual movies, THAT is how much of a completist I am.

Luke’s emotional journey reaches its climax and Darth Vader must decide whether to embrace the conflict within himself or perish. Things are not made easy however, as my favourite Star Wars character of all time is on his best villainous form: Emperor Palpatine. His attempts at luring Luke to the Dark Side are so much more believable than with Anakin.

The sheer venom when he speaks works so much better than all the insane cackling he does in Sith: “With each passing moment you make yourself more my servant!”

He also enjoys messing with Luke though: “I’m afraid the deflector shield will be quite operational…when your friends arrive.” Bastard. He revels in his own crapulance and genuinely enjoys making others suffer.

Palpatine enrages Luke so much that he then partakes in the most emotionally charged lightsaber battle of the Saga: Father vs. Son. Palpatine laughs (quietly) in the background while these two family members try to kill each other.

When Vader finally makes the decision to rebel, I still get that shiver down my spine. Every time I shout “YESSS!!! TAKE THAT YOU SON OF A BIIIITCH!!” which I’m sure my neighbours really enjoy.

There is genuine emotion in Jedi as well; who doesn’t shed a tear when Yoda passes away? Admit it, we all have at some point! The emotional conflict between Luke and his father makes for really tense scenes and the cremation at the end is filled with sadness.

Jedi is the worst of the Original Trilogy in terms of the Special Editions: Yes, we get Vader shouting “Nooo” just like how he ruined Sith. The Sarlacc pit also has the crap CGI additions and we even get the lamest musical number of all time, which adds nothing to the story. We also are graced with Hayden Christensen as a ghost at the end, rather than Sebastian Shaw. I don’t know why, but that really grinds my gears; it was fine before, so don’t change it just because you couldn’t come up with some continuity, George!

One last thing about the Special Editions is the new end theme tune; although the new version is interesting, I’ll always have a special place in my heart for the Yub Nub tune.

The biggest crime of Jedi though is under using Han Solo; the (other) greatest character in Star Wars. He has nothing really to do and has no purpose. Sure he gets to blow some stuff up in the second half, but anyone could do that and it’s a real letdown.

A pet hate that my brother has is Chewie doing the Tarzan impression while swinging through the trees, which is understandable but it’s never really bothered me.

As always, John William’s score is outstanding and introduces us to the Emperor’s Theme; which is another personal all-time favourite. It’s quiet and subtle (the way it should be) rather than loud and bombastic. The use of the Force theme during Vader’s funeral pyre is extremely moving and really adds to the emotion of the scene.

Overall, Jedi is easily the most flawed of the Original Trilogy but it’s still a classic and the scenes with the Emperor are arguably my favourite of the entire Saga. If you can find the non-Special Edition version though, I’d go for that instead.