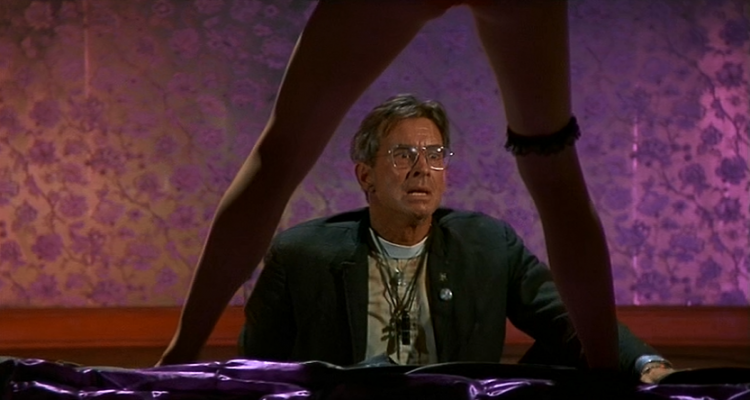 Despite the cast doing their best Crimes of Passion is a bit of a mess with an even tone.

Plot: A sportswear designer leads a double life as a hooker named China Blue. One of her clients, a divorced man, decides he loves her and figures out who she is. He then begins wooing her, which she fights against since he was a client. Meanwhile a street preacher works the red light district trying to save souls. He decides to save China’s immortal soul and begins hounding her. Eventually he gets out of hand and the man in love with her must try to help her.

Review: Crimes of Passion has always been a movie I’ve resisted watching. I’m not a fan of director Ken Russell: Never have been, never will be. I’ve found his films to be over the top in the worst way, and lawless, as if cinema was his way to open up every can of worms he ever came across and he found glee in feeding those worms to his audience. I herby declare that I’ve kept my mouth shut and won’t have those worms, thank you. Now that I’ve watched Crimes of Passion I can attest to the fact that Russell’s treatise on American hypocrisy has to be one of the loudest, gaudiest, and tackiest movies I’ve ever seen. And trust me: I’ve seen a lot of movies.

There’s a gorgeous $50 hooker on the streets of Los Angeles, and her name is China Blue (played fearlessly by Kathleen Turner). China basically has a death wish: She brazenly taken on all comers, tending to their every whim and desire with a smudged smile on her face. She’ll do absolutely anything for $50, but she does it because she’s one of the rare few that actually enjoys her work. And here’s the rub: By day she’s a wealthy fashion designer, so what gives? Why go the extra mile to put her life at risk and degrade herself night after endless night? This is a question another character – Reverend Peter Shayne (Anthony Perkins) – asks himself each and every night as he prowls around the derelict red light districts. He gets off on every perversion known to man, but he’s deluded himself into thinking he can save souls with his message of salvation. Once he fixates on China Blue, he basically becomes her psychopathic stalker, but in the midst of all of that China has taken on a client named Bobby Grady (John Laughlin), who is in the middle of a marriage crisis. He falls hard for China Blue (because she’s hot and does anything anybody requires of her), but when it gets too personal, China Blue shirks him off, which puts her in an even more vulnerable position when the crazed, razor-dildo wielding Revered comes to “save her soul” (i.e. impale her with his weapon of choice).

Guised as a comedy, but emerging from the toxic slime of staged porno chic, Crimes of Passion is a neon-lit, shockingly ill-conceived movie that can’t possibly be seen the way it wants to be seen. Russell clearly wanted this to be a comedy, but with deep, wide dips into sobering drama and psycho-thriller territory, it’s a mutant with too many pumping organs to sustain itself after Russell forgot to give the movie a soul. Star Turner does the absolute impossible with a role that must have been an immense challenge; she emerges a true superstar, but what does the movie do for her? Perkins gave a memorably sick and twisted performance, but the movie is a complete and utter failure. If Paul Verhoeven had made it, it might be considered a classic, but Russell was never capable of delivering a movie that went beyond shocking and outlandish.

Arrow Video has just released the definitive edition of Crimes of Passion on a Blu-ray / DVD combo pack, containing both the unrated and director’s cuts of the film, both in high definition. In addition to great looking (and newly commissioned) artwork by Twins of Evil, the discs contain tons of special features, including audio commentaries by the late Russell, producer/screenwriter Barry Sandler, and seven deleted and extended scenes, with commentary. Also included are on-camera interviews, a music video, and more. Arrow has given this movie more than it deserves, but hey: More power to fans of this movie and to Arrow for giving it to them.