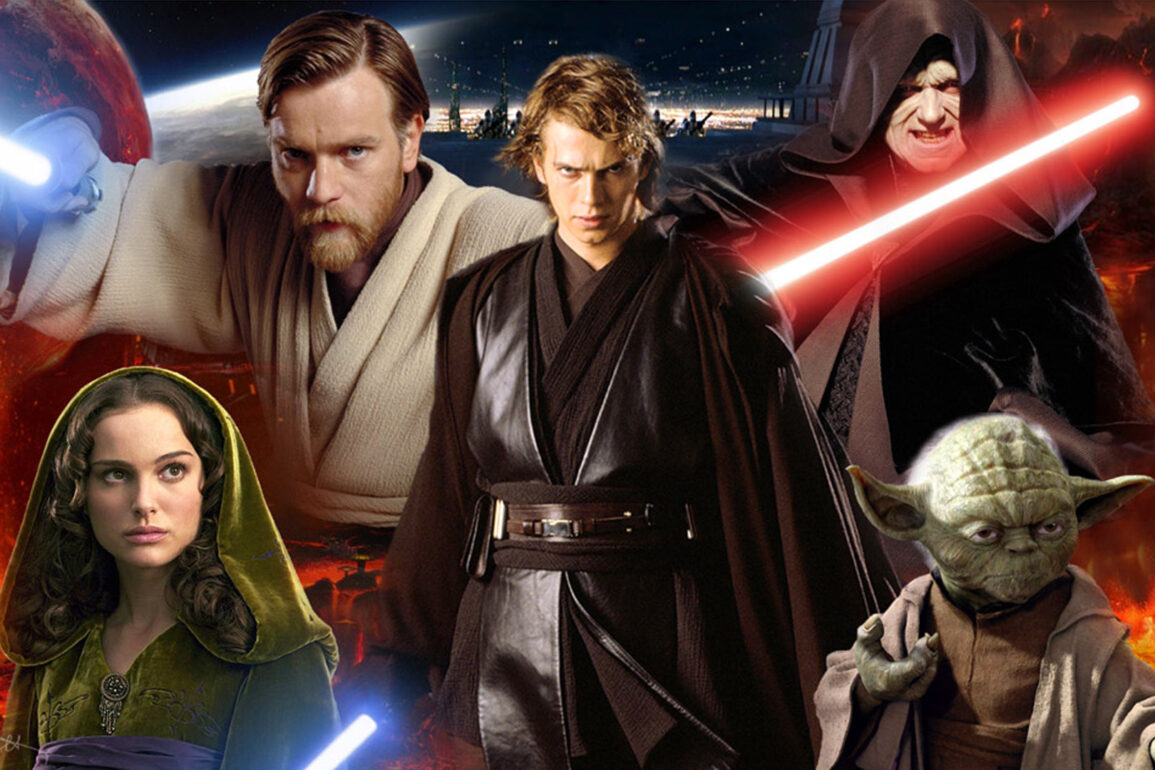 Revenge of the Sith is let down by a terrible script and poor performances in what should be one of the most devastating stories of all time. Instead it is merely entertaining and at times embarrassing to watch.

Plot: Three years into the Clone Wars, the Jedi rescue Palpatine from Count Dooku. As Obi-Wan pursues a new threat, Anakin acts as a double agent between the Jedi Council and Palpatine and is lured into a sinister plan to rule the galaxy.

Review: Sith is the darkest of the entire Saga and pretty much leaves you with nothing at the end. It does however prove one thing: That the other two prequels were completely unnecessary. Also what is it the Sith want revenge for? That’s never really explained, at least not in the films.

Anyway, Anakin completes his journey to the Dark Side and finally becomes Darth Vader, but not before screwing up everything else in his life first.

The film opens with a space battle that rivals the original movies in terms of scale with Obi-Wan and Anakin sent to rescue Chancellor Palpatine from the annoying and lame General Grievous. Don’t do it, guys, he’s eviiiil!

Once they board Dooku’s ship there is some “comic” relief from some droids with squeaky voices. I understand why they are in there though, for the kiddies, before they get scarred for life by the second half of the movie.

There is some nice banter between Obi-Wan and Anakin showing what “great” buddies they are… but one thing I don’t really get is why Anakin turns against him all of a sudden. Is it because Anakin imagines Obi-Wan is trying to steal Padme from him? Hayden is a little better performance-wise but I can’t help but think what it could have been like with a better actor and script.

The story of Sith is arguably the best of the series; the rise of Palpatine and the bad guys winning is a very ballsy move and for the most part, works.

The best non-action scene of the film is between Anakin and Palpatine at the Opera where Anakin is told of the tragedy of Darth Plagueis the Wise. Ian McDiarmid plays the scene subtly and you believe his manipulation of Anakin. This however, is totally flushed down the pan during the “transformation” scene; what started off as a subtle performance by McDiarmid turns into a pantomime: “Unlimited POWAAHHHH!!”

If you watch the recent Marvel film The Avengers, Loki delivers a similar line but does it quietly and because of that, it works so much better. What were they thinking with all of the weird vocal tricks for Palpatine’s transformation?

I love how he has a posh English accent but when he goes full Dark Side he becomes a Scot. Hey, wait a minute; up yours, George!

Despite it being hilariously over the top, I do enjoy the scene though as it really is nightmarish. If they had only dialled back McDiarmid then it could have been brilliant.

The second half of Sith is where the film really comes alive and is (mostly) worth the wait. The battle between Obi-Wan and Anakin looks fantastic but the fight between Palpatine and Yoda is arguably even better. Duel of the Fates returns and really adds to the excitement of the whole battle.

There is one scene where Anakin kills a room full of unarmed children which, even now is a tough scene to watch despite the wee boy being a rotten actor. After killing a room full of children can this guy really be redeemed just by killing the Emperor? Hmm, I’m not so sure.

Sith is still guilty of some truly terrible dialogue, mostly by poor Hayden again. “My new Empire” is delivered particularly badly, but it’s not enough to ruin the film.

There is however, one moment that does ruin the finale and you know fine well what it is: “Nooooo!” Really? In what Universe was that a good idea? There were so many other things you could have done but you make Vader do his best Seymour Skinner impression. I laughed in the cinema, the most important scene in the Saga and I laughed!

One of my favourite scenes for sheer emotional drama however, is the Order 66 scene where the Clones turn on the Jedi and wipe them all out. The music is fabulous and really adds to the whole tragedy of the tale.

The one thing I can say about the prequels is the fact that you don’t really care about any of the characters; do you really care what happens to Anakin or Padme? In the original movies, you cared about Luke, Leia and Han. Han Solo is the lovable rogue who can be ruthless when he wants to be (He shot first!), Luke is the idealistic youth with dreams of far off places and adventures. These are characters that after 30 years we still quote and speak of affectionately.

Then you look at characters like Anakin… he wants his mommy and is a stroppy teen who really needs a good pimp slapping. Padme… wears nice outfits… moving on.

I think the whole prequel trilogy could have been so much better if George had provided a template of the story. Then someone who could craft a script and characters may have created a truly classic tale.

Overall, a vast improvement to the other prequels but still a deeply flawed piece. It’s extremely entertaining though and certainly deserves a place in the Star Wars canon.