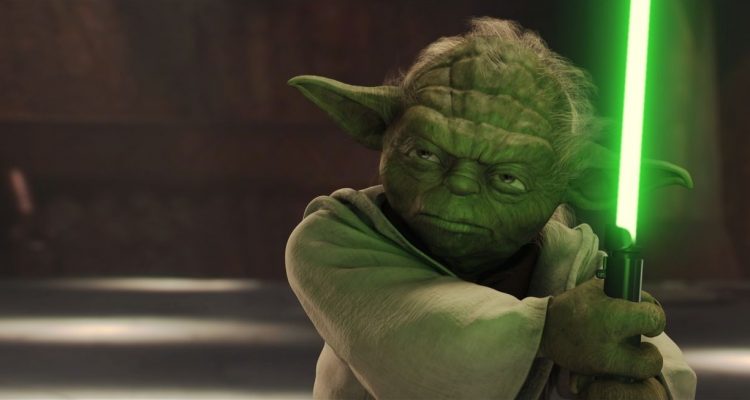 Attack of the Clones is certainly a better film than The Phantom Menace but it still has dull pacing and appalling dialogue.

Plot: Ten years after initially meeting, Anakin Skywalker shares a forbidden romance with Padmé, while Obi-Wan investigates an assassination attempt on the Senator and discovers a secret clone army crafted for the Jedi.

Review: So we come to the second prequel and I can’t decide if it’s better or worse than Phantom. On the plus side Jar Jar is only in a couple of scenes but on the negative side Jar Jar isn’t dead.

I try to be as positive as possible when reviewing a movie but it’s difficult for me to say anything positive about Hayden Christensen’s performance as Anakin. He is more wooden than Pinocchio and really lacks the charisma required to play such an important character. His monotonous tone is so lifeless that you just can’t empathise with the character or the supposed emotional turmoil that he’s going through. The scene after he kills the Sand People should be shocking and disturbing rather than unintentionally funny.

The romance scenes between Anakin and Padme are so cringe inducing that I feel myself going red while watching them. Natalie does her best with the material given to her and she looks fantastic but even she can’t save those awful scenes.

The plot just isn’t very interesting and is more of a detective story than a Star Wars film. Obi Wan spends the first half investigating who tried to assassinate Padme while the audience struggles to care.

As much of a fan as I am of Samuel L. Jackson, he seems really out of place as a Jedi master and I keep waiting for him to end each sentence with “Motherfucker!” It surely would have been more interesting, although his “This party’s over” line is pretty awesome.

There are a lot of things I like about this film though; I enjoy Palpatine’s political machinations and how he manipulates Jar Jar into making the worst decision in the history of the galaxy; nice job, dickhead.

We are also blessed by having Temuera Morrison as Jango Fett, who easily steals the movie for me. He’s just so damn cool and the fight scene between him and Obi-Wan on Kamino is one of my favourite action scenes in the Star Wars movies. When they are having the dogfight in space and Slave-1 fires the seismic charges, that is officially the coolest sound effect of all time.

I liked how we get to see a young Boba Fett although I’m not sure I wanted to know his back story; some stories are better left untold.

Christopher Lee brings some gravitas as Count Dooku, former Jedi turned ass hat. Although I would have liked to see Darth Maul come back, Lee does a great job in making Dooku evil and yet sorta likable at the same time.

The Clone Wars battle on Geonosis at the end is pretty epic in scale and has some nice moments. When Yoda puts down his walking stick and opens up a can of whupass on Dooku, you can’t help but smile.

John William’s score is once again fantastic and we even get the full Imperial March at the end which really gives us a feeling of old-school Star Wars.

Overall, I’ve decided I do prefer this one to Phantom, so it gets an extra point. Skip the romance scenes and you have a half-decent Star Wars flick with some pretty good action scenes.