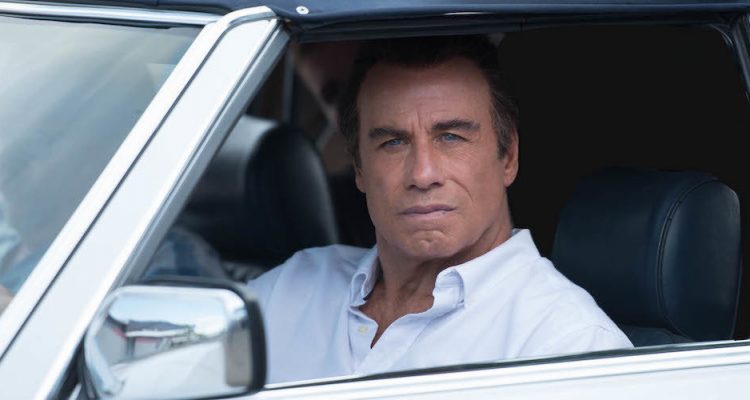 Based loosely on the true story of the life and death of Don Aronow, Speed Kills is an oddly structured vehicle for falling star Travolta, who doesn’t give much to the role or the picture, even as one of the dozens of producers credited.

Plot: Speedboat racing champion and multimillionaire, Ben Aronoff, leads a double life that lands him in trouble with the law and drug lords.

Review: A handsome, happy-go-lucky entrepreneur named Ben Aronoff (John Travolta) is struggling making a living in the ’60s when he sees a speedboat cruising one day, and he decides after riding one for the first time that he’s found his calling: He will create a business building and selling (and racing) speedboats in the Florida Keys, and in no time at all his business and racing cred are a smashing success. It doesn’t take long for the mob to see that Ben’s business is the perfect cover for moving cocaine and marijuana, and they muscle in on him to allow enforcers to move product using his boats. At first the DEA thinks Ben might be involved in the growing drug trade, but his paper is clean and he makes the right friends, so the DEA leaves him alone. When Ben’s oldest son is severely injured in a car crash, he asks infamous mobster Meyer Lansky (James Remar) for a loan to help with medical bills, and even after paying off his debt in six months, the mob won’t let Ben forget that he is still beholden to the whims of what the mob requires of him, and that is to shift his business title to mob holdings. This sends a red flag to the DEA, and yet still Ben’s clean business tactics redeem him. By the 1980’s, the drug trade is in full swing, with Ben’s dangerous dealings with the mob calling his alliances into question, but his business with everyone from then-vice president George Bush (Matthew Modine in one scene) to a Middle Eastern Shah, Ben seems untouchable. Finally, as the DEA closes in on the mob, Ben is subpoenaed in court to testify against the mob, which puts him in a precarious position, and his family at great risk.

Based loosely on the true story of the life and death of Don Aronow, Speed Kills is an oddly structured vehicle for falling star Travolta, who doesn’t give much to the role or the picture, even as one of the dozens of producers credited. The movie looks pretty good and has some names in it, but if you compare it to anything that his peer Nicolas Cage has been doing over the last five or six years, it pales in comparison simply because Travolta doesn’t have the same pizazz or enthusiasm Cage does, even in his latest, smaller films. Travolta has given a few tidy performances in the last few years, namely in In a Valley of Violence and I am Wrath, but even with the bigger blip on the theatrical radar that was Gotti this year, Travolta has a long way to go to show that he’s worthy of a proper comeback. Speed Kills is awkward in execution with a lopsided decades-spanning timeline, and when it’s over you wonder why they felt the need to tell this story in the first place. First time director Jodi Scurfield doesn’t have a sure hand at his craft (at least not yet), and the script is completely uninspired.