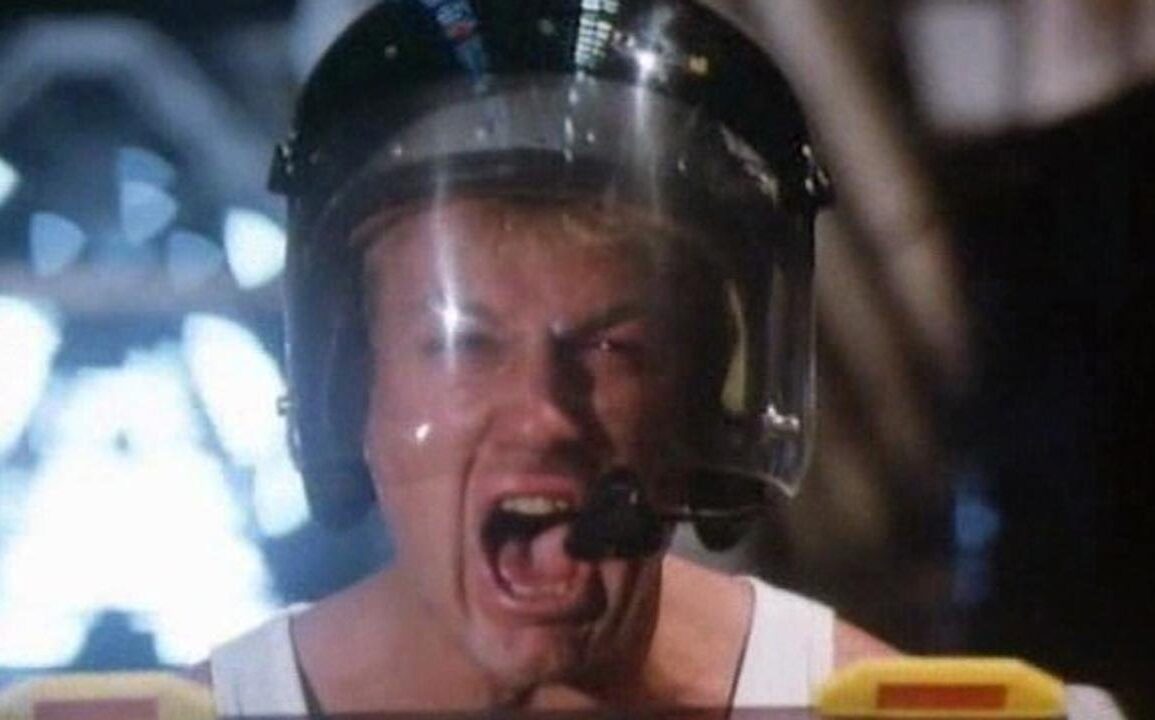 Saddled with an incomprehensible story, laughable costumes & effects and a ridiculous villain, this movie is only fun if you’re sitting with a bunch of friends making fun of it.

Review: I literally wanted to put the plot as “…”. That would make more sense than what the hell I sat through 93 minutes of. And believe me, I felt every minute of that 93. This has to be one of the most incoherent plots I have ever witnessed. Nothing made sense. Why is the bad guy doing what he’s doing? Beats me. Something about wanting to get off the ship he’s on. Why can’t he just leave? Search me.

That’s just the tip of the iceberg. Reb Brown plays a guy who beams onboard a ship and almost immediately is given the latitude to become a leader. The guy who I guess was the ship’s leader makes this announcement over the ship’s intercom (so, you know, the villain can hear it as well). Immediately afterwards, they have a party. This leads to sex between Brown and a girl he met ten minutes ago (his real-life wife, Cisse Cameron). Cameron gets an “introducing” credit, even though I remember her as the librarian prostitute in the graveyard in Porky’s II. At no point during this entire sequence of events does Brown say, “Hey, we should go find this guy.”

And that’s the thing. Even though the protagonist and antagonist are on THE SAME FRIGGING SHIP, they don’t bother engaging until the end. Until then, there are hula-hoops, jazzercise costumes, tin-foil-type costumes, a bunch of weird-ass mystics fondling those electricity balls you find in novelty shops while wearing someone’s drapes, and an old dude hanging out in a freezer. I’m serious; this is all in this movie.

Besides their convoluted motivations, the villains are just ridiculous. I enjoyed John Phillip Law in Danger: Diabolik, but his performance in this flick is plain absurd – he laughs after every line. Every line. Maniacally. For no reason. He’s got a sidekick who seems to think he’s Peter Lorre – at least, that’s who he seems to be trying to emulate throughout with his voice and mannerisms. I honestly don’t think this movie had a director.

The action – when there is action – is nothing to write home about. A big sequence at the end is supposed to involve the hero and villain duelling in cars. These cars are arguably the worst I’ve ever seen in any film. They’re like bumper cars. They reminded me of those cardboard cars you may have slung around your waist while in a high school production. I literally think I saw one wobble at one point. Other than that, you have Reb Brown running around, shooting people and occasionally giving a nonsensical yell. Because, why not.

I’ve heard this movie was featured on one of the most popular episodes of Mystery Theatre 3000. It’s not hard to see why. It’s also not hard to see why at least one of the three (!!!!) directors on this film tried unsuccessfully to get his name removed from the film. I would have, too. I cannot urge you strongly enough to avoid this movie at all costs unless you’re going to get a group of friends to sit down and watch it with you and laugh at the inanity. I think that’s the only way the viewing experience of this movie would be close to enjoyable.