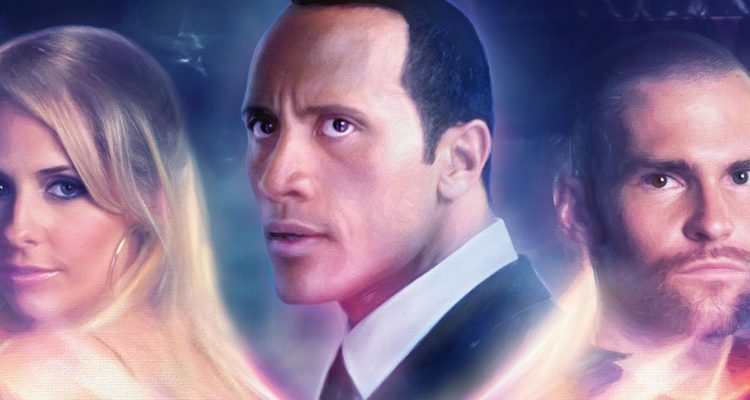 Southland Tales was always a cult classic, but this incredible Blu-ray from Arrow just proves it.

The world concludes in a wildly imaginative fashion.

This is how the world ends, Richard Kelly, the writer and director of this amazing movie, tells us. He gives us his complicated and multi-layered version of the book of Revelation, and it is a fascinating and mind-bending trip. He starts it, like George Lucas did with the original Star Wars at “Chapter 4” and it ends at “Chapter 6,” and it feels as though the world ended even before it began, in a way. It’s a domino effect, with dozens of important and seemingly insignificant characters all playing their part in a grand, cosmic scheme all predestined to bring about the end of all things. We learn at the beginning that there was an atomic blast the size and magnitude of Hiroshima in the state of Texas in 2006, and World War 3 starts almost immediately afterward. Gas and oil becomes impossible to obtain, and alternate forms of energy are needed to maintain our way of life. The draft is reinstated, interstate travel is possible only with visas, and U.S.-IDENT, an ultra think-tank is installed within the government. Fluid Karma, an alternate energy source is created, and a prophetic screenplay co-authored by a porn star named Krista Now and an amnesiac movie star named Boxer Santaros is surfacing on the internet … Holy Cow! This doesn’t even scratch the surface! Let me also say that Boxer Santaros (Duane Johnson) isn’t the only person with amnesia. There’s also Ronald Tavernier (Sean William Scott) who has a twin brother, and he is recruited by the Neo-Marxists to impersonate him, but instead is abducted by the Angel of Death (Christopher Lambert!) who “rides a pale horse,” which in reality is an ice cream truck loaded with machine guns and rocket launchers. This movie is filled with good actors: John Laroquette, Jon Lovitz, Sarah Michelle Gellar, Mandy Moore, Miranda Richardson, Kevin Smith, Curtis Armstrong, Justin Timberlake, and more. Kelly weaves an intriguing spell, and it almost feels like a David Lynch dream / nightmare, but it’s more fun than any of Lynch’s movies. This is a movie unlike any other, and it rewrites the post-apocalypse genre.

For best results, I recommend reading Richard Kelly’s first three chapters in graphic novel format: “Two Roads Converge,” “Fingerprints,” and “The Mechanicals,” which all lead up to the events in this film. This is a difficult movie to follow even if you haven’t read (which I had before seeing this theatrically in 2007) the graphic novels, so the more help, the better. Also, Kelly’s first film Donnie Darko follows a similar path to apocalyptic doom, and you may want to start there first. His third film, The Box also had an apocalyptic slant, and though all three of these have been panned by critics, I urge you to give them a try. Moby did the hypnotic score to Southland Tales, and all of the source songs really work well. This movie was delayed at least two years that I know of, and though I can understand why, I also shake my fist at the studios (it was at Universal before it was at Sony) for not releasing it sooner. Miraculously, this is more prescient than ever before, and it almost acts as a prophecy on how the world would end up, especially in a post-Trump / COVID world.

Arrow’s new (and extremely welcome) Blu-ray release of Southland Tales comes in a 2-disc limited edition, and contains both the theatrical cut and the elusive “Cannes Cut,” which runs more than 10 minutes longer. I caught the Los Angeles premier of the Cannes Cut a few years ago at the LACMA, and I can safely say that I prefer the original theatrical cut, but for fans of the film (and the following is definitely growing), the Cannes Cut is essential viewing. Arrow has restored the film in 2K, and includes an audio commentary by Kelly, an in-depth documentary about the making of the film, archival features, an animated short, an image gallery, and more. 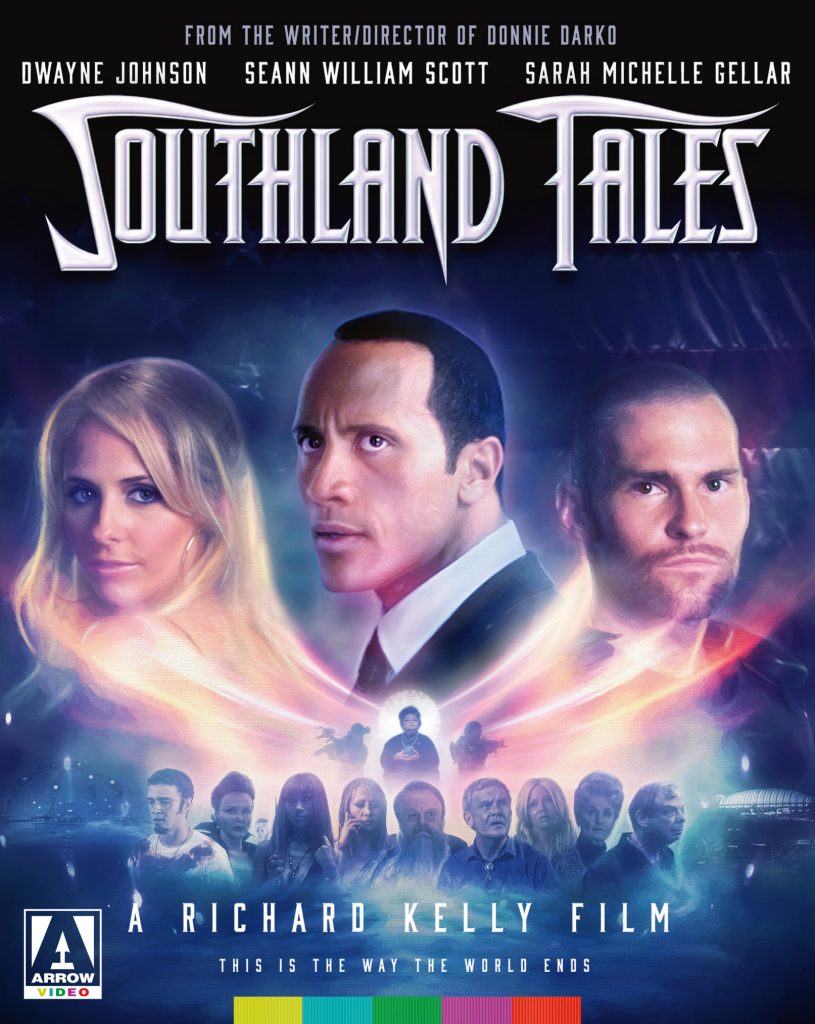