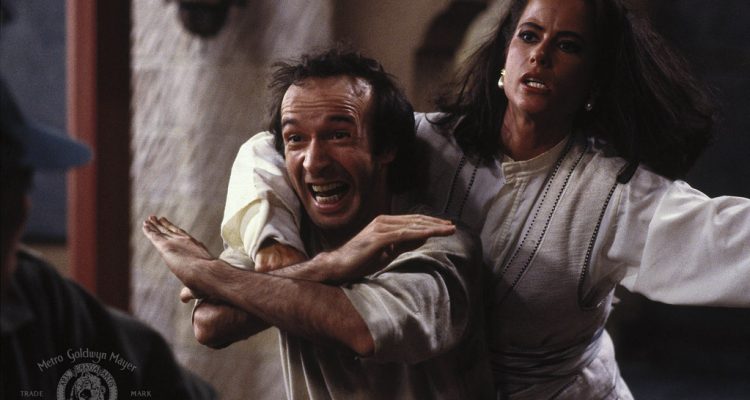 It may not be all that funny but it feels like a 007 movie and it’s surprisingly violent and action packed.

Plot: Charles Dreyfus encounters Jacques Gambrelli, who reminds him painfully of Inspector Clouseau, the man who drove him insane. With good reason: Gambrelli is Clouseau’s son.

Review: The last of the official Pink Panther films that spanned 30-odd years, Son of the Pink Panther feels like a comedy squeezed into a 007 action adventure. A master criminal named Zarba (Robert Davi playing it straight) and his crew kidnap a princess and hold her for ransom, and along comes a clownish bicycle cop named Gambrelli (Roberto Benigni before he won the Oscar for Life is Beautiful) to foil their plans. We find out pretty soon (if the title didn’t tip you off) that Gambrelli is the son of the infamous super sleuth Inspector Clouseau (played numerous times by Peter Sellers), and the apple doesn’t fall too far from the tree with this guy. A hapless and clumsy romantic who’s basically bulletproof and foolproof, Gambrelli saves the day, while driving his father’s old nemesis Dreyfus (played again by Herbert Lom) insane all over again.

Surprisingly action packed and violent, Son of the Pink Panther isn’t very funny, but if you’re watching it to see some globe trotting scenery and goofy stunts, then you should have a good, harmless time. It’s strange watching this, realizing that MGM/UA was filling the 007 void during the period when there weren’t any James Bond films being produced. This definitely feels like a Bond film, so if you’re interested in that angle, you’ll see what I mean. Benigni tries hard to milk a laugh, but the film just isn’t very inspired. It was also the last movie Blake Edwards made.

Kino Lorber’s recent Blu-ray release looks nice and comes with an audio commentary, deleted scenes, a making of featurette, and a bunch of trailers.