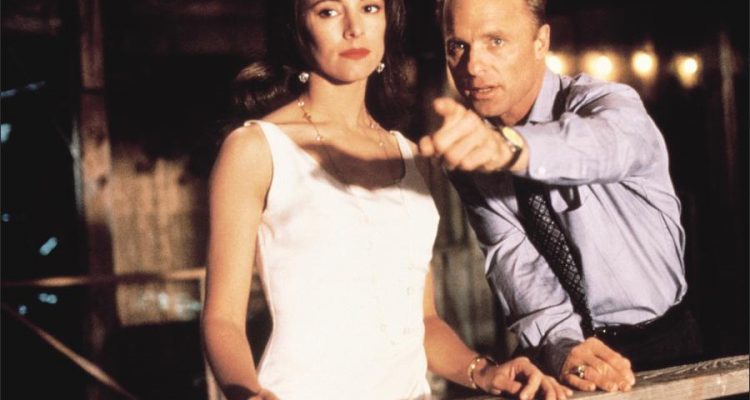 Plot: Detective Kyle Bodine falls for Rachel Munro who is trapped in a violent marriage. After shooting her husband, Kyle reluctantly agrees to help hide the body, but Kyle’s partner is showing an unusual flair for finding clues.

Review: A stalwart detective named Kyle Bodine (Ed Harris) is known as being a by-the-books crackerjack policeman, and his rookie partner Lamar (Benicio Del Toro) takes all his cues from him as they go from case to case. By happenstance, Kyle meets a beautiful woman named Rachel (Madeleine Stowe) at a bar not realizing she’s in an unhappy, abusive marriage, and before long they’re having a passionate love affair. One night, Rachel and her husband (played by Charles Dance) have a violent fight and Rachel shoots him dead, leaving a bloody, messy aftermath. Coming to her rescue is her lover Kyle, who sees no choice but to help her cover up the killing, and being the seasoned detective that he is, he does a pretty good job at covering their tracks and disposing of the body, but before long questions arise as to her husband’s disappearance. When Rachel’s husband’s body is discovered, clues point to Kyle, and suddenly he realizes that he’s being set up by his lover … and his partner, who has an ulterior motive in framing him.

What might have easily turned out to be yet another direct-to-video erotic thriller in the heyday of sordid potboilers full of sex and violence, China Moon is elevated by strong performances by attractive leads who really dive into their roles. The chemistry between Harris and Stowe is sultry and electric, and while the story and plot aren’t anything special, the film manages to feel vibrant, despite its faults. I vividly recall when this film was theatrically released, and it came and went so fast that no one really had the chance to catch it. It was filmed in 1990/1991, but sat on the shelf during Orion’s bankruptcy period. Directed by John Baily.

Previously released on VHS and DVD (from MGM), it can now be enjoyed on high definition courtesy of Kino Lorber in a crisp transfer. Director Baily can be heard discussing the film on the audio commentary (along with the editor), and the theatrical trailer is also included on the disc.