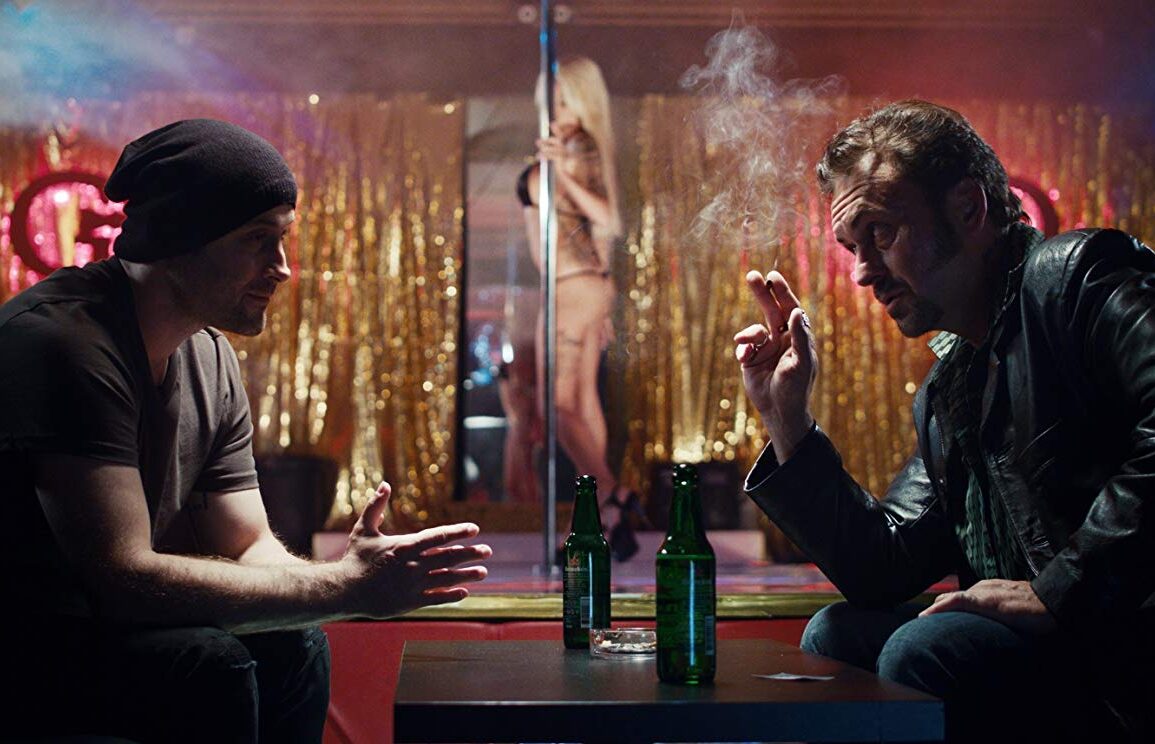 Risky Business meets The Exorcist in Skin Creepers, a 2018 horror comedy from Ezra Tsegaye, an intriguing film at first, but falls apart rather quickly during the second act, and with a tone and pace all over the place.

Plot: An adult film shoot goes off the script when a demon takes control of the movie’s star.

Review: Risky Business meets The Exorcist in Skin Creepers, a 2018 horror comedy from Ezra Tsegaye.  Two ambitious and resourceful German filmmakers (Nicolás Artajo and Nicolas Szent) aspire to make a groundbreaking adult film, but hit some obstacles when it comes to funding after putting most of their budget towards bringing the spoiled and wild American adult actress Sasha Blue (Barbara Prakopenka) on set and booking her in a hotel room where, unbeknownst to them, a failed exorcism took place and still houses evil spirits.  After approaching a dangerous pimp (Thomas Schmuckert) to cast his prostitutes as fellow cast members, they get into even more hot water when Sasha becomes possessed and violently attacks one of the prostitutes and “damaging the merchandise” so to speak.  After looking into the supernatural nature of Sasha’s behavior via a bellhop and the internet, they look for an assist via a televangelist (Dieter Landuris) to send whatever it is back to Hell before another evil spirit or an angry sex trafficker gets to them first.

The idea behind Skin Creepers is intriguing at first, but falls apart rather quickly during the second act.  The tone and pace of the film is all over the place, from horror to comedy and then horror again, ironic since much of the movie’s latter half takes place on one set.  The plot takes such a hard left turn once things are put into place that it would almost seem impossible to know what’s coming next, yet manages to be a rather predictable film when any storyline twist or flashback takes place.  Prakopenka’s Sasha Blue character bears an impressive resemblance to her obvious real life inspiration namesake, but American viewers will have to suspend disbelief as to her country of origin when she speaks no English throughout the film, an issue that could have been resolved in only a few short sentences if given time within another scene.  The gore, makeup, sound, music and photographic effects are terrific, and their team had some incredible work with wounds and certain other violent events.  It would have been great to see more of those effects and the practical approach over the CGI building and fire effects present in this film, which resemble something out of late night religious channel programming.  Artajo and Szent carry the story well enough, but Dieter Landuris is this movie’s bright spot, bringing exactly the kind of energy and mannerisms necessary for such a wildly shifting story, and hammers home the underlying themes with a few lines about atheists and actresses.  Schmuckert’s performance is exactly the opposite, and appropriately menacing for the role.  Strangely, for its pornographic plot elements, there is an alarming lack of nudity, save for one person who is completely detached and irrelevant to the rest of the movie.

Skin Creepers as a whole makes about as little cohesive sense as the title to the film, but it has a spirit behind it that makes it fun and entertaining enough to watch.  That same spirit has potential to be more of a phantasm and less of an amusing haunting.