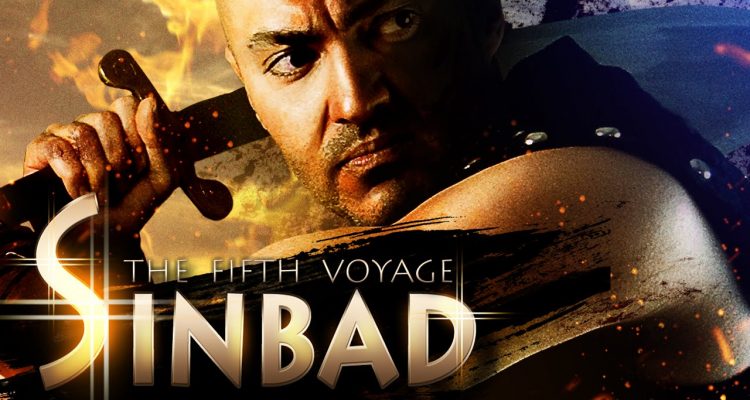 Review: In an age where two cinematic extremes clash – somewhere between the world of comic book movies with quarter billion dollar budgets and the land of Sharknado – lies a mysterious middle ground in which resides the unorthodox, cartoony throwback of an effort such as Sinbad: The Fifth Voyage from Giant Flick Films.  The plot is as simple and straightforward as any Saturday morning cartoon or 8-bit video game: Princess Parisa (Danielle Duvale, David & Fatima) is captured by an evil sorcerer (veteran actor Said Faraj, True Romance, ER, Bones).  Sinbad (Persian actor/director/producer Shahin Sean Solimon, Djinn), the lover of the princess, the movie’s protagonist and the title’s namesake, sets off with his crew on an adventure to come to her rescue, encountering classic mythological monsters, a pair of genies, vampiric dancers and even Death along the way.  Sir Patrick Stewart provides narration throughout.  The result is best described as bare bones B-movie fare, a combination of cult classics, cartoons and chaos.

Those expecting something incredibly deep or revolutionary will not find it here.  What they will find, however, is a classic nostalgia trip with effects which, while updated for modern times, still feel like something more in tune with 1973’s The Golden Voyage of Sinbad.  CGI meets stop motion in the film’s many monsters, who do not particularly look realistic or menacing, nor do they make for terrific fight choreography with a human, although that was never particularly the case in a Sinbad film in the first place, and is the sort of thing that a young child might enjoy a great deal.  The basic premise is carried by Shahin Sean Solimon’s lead, the Sinbad character being among the only ones to show much in the way of character development and depth, the other being Said Faraj as the classic villain.  His screen presence dominates every scene in which he appears, acting as the perfect counterbalance to the helpless princess character and only matched by Solimon’s stoicism.  The remainder of the story and dialogue, however, is not quite as majestic.  Most of the supporting characters are one dimensional at best, with occasional spikes via Sadie Alexandru as Firoozeh.  Most of the others appear only to lend an extra body to a shot or to die at the hands of a monster.  Danielle Duvale is a gorgeous damsel in distress, but the love scenes tend to fall a little flat and she isn’t given a lot to work with otherwise.  There are also some glimpses of storytelling via cinematography that add to the mood in an otherwise pretty straightforward story.  Still, the overall product is what matters here, and it delivers in the spirit of the classics in a way that will undoubtedly appeal to two crowds: kids and audiences of specialty late night showings.  There’s definitely a soul here, and here’s hoping we get more of these kinds of efforts in the future.