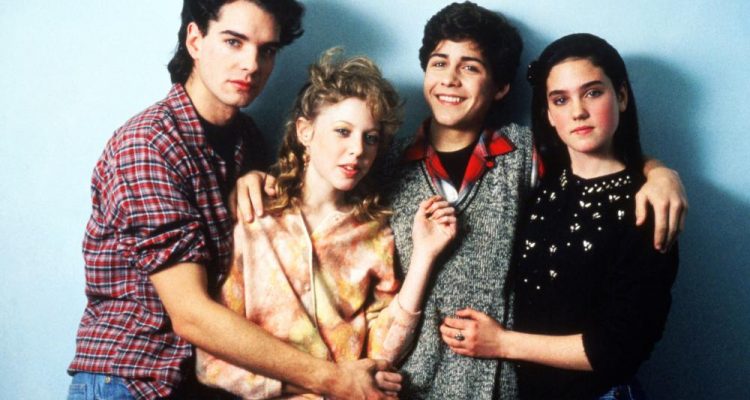 Great writing and directing; it has a genuine feminine texture and ambience.

Plot: When her father goes out of town, beautiful A-student Natalie lets best friends Jeff and Polly move in. Separately and together, the trio of young teens learn much about life, love, and growing up.

Review: A maladjusted kid named Jeff (Byron Thames) runs away from home after having an argument with his stepdad. He goes straight to his best friend Natalie (Jennifer Connelly), whose dad just left on a long business trip. She agrees to let him stay over for as long as she can stand him. Their other buddy is the always-swooning Polly (Maddie Corman from Some Kind of Wonderful), and she’s always got a crisis of heartbreak just on the precipice. The boy she’s in love with is the guy who just asked Natalie out, so that’s not good. She rebounds completely by accident when she’s in town by herself: She spies an attractive young man, and by happenstance he notices her and gives her some attention. They spend an hour or so together, and as a joke, he buys her a sexy negligee. It doesn’t surprise her when he tells her he’s famous: He’s Zoo (played by Billy Wirth), an underwear model and pro baseball star, and he promises her they’ll keep in touch. It’s all she needs to propel her into dreamland, where she fantasizes about him all day long, every day … until she realizes they’ll never meet again. Meanwhile, Natalie is dealing with some issues of her own, like her new boyfriend who’s pressuring her into sex, or her upcoming trip to Washington D.C. to meet the President (she’s part of an honor’s program). With Jeff in her house, infringing on her privacy and space, and with her friendship with Polly on the rocks, Natalie struggles to maintain her grounded good sense. These three kids just might be friends for life, so somehow they’ve got to find a common ground.

Seven Minutes in Heaven is simply delightful. I loved every minute of it. For years I avoided it, but I shouldn’t have. It has a unique rhythm and a distinct voice all its own, and I think that’s due to the fine, perceptive writing by Jane Bernstein and Linda Feferman, who also directed. It has a genuine feminine texture and ambience, which I find very rare in teen films, particularly from the 1980s. Sometimes it feels like a more realistic John Hughes movie. The score and songs by Robert Kraft are excellent. Highly recommended.

Warner Archives released a nice looking DVD on demand of this movie. It comes in a 1:85:1 widescreen format, with the original trailer as a bonus. It’s affordably priced to own. Add it to your collection.