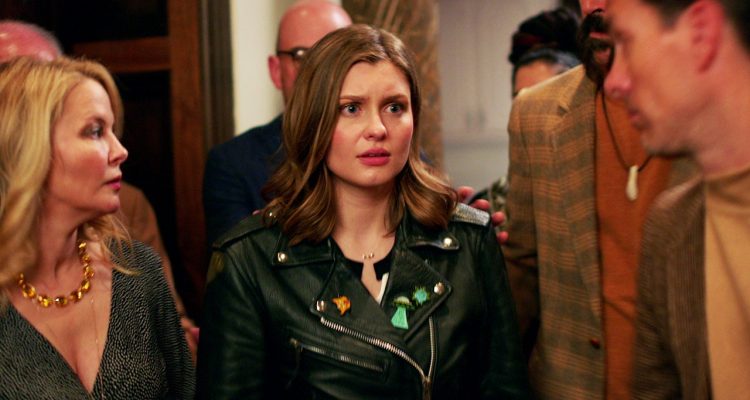 More comedy than horror film, Satanic Panic struggles with its footing with excessive writing that gives characters too much to say, leaving the film without a proper mood.

Plot: A pizza delivery girl at the end of her financial rope has to fight for her life – and her tips – when her last order of the night turns out to be high society Satanists in need of a virgin sacrifice.

Review: An inherently sweet-hearted pizza girl named Sam (Hayley Griffith) is literally down to her last five bucks, and when she’s sent out on a pizza delivery run, she can’t get a tip for the life of her. She ends up at a swanky mansion where she is snubbed yet again, and instead of taking it like she usually does, she lets herself in the door, demanding a tip, but finds herself in the middle of a Satanic ritual, surrounded by rich, influential people – namely the beautiful Danica Ross (Rebecca Romijn) – who suddenly see her for what she is: a virgin, and therefore a perfect sacrifice to summon the Dark Lord Baphomet. What ensues is a night of survival for innocent Sam, who manages to escape to another house on the block, but she runs into the virginal daughter of Ross, who has also been targeted by the cult for a sacrifice, which proposes a tricky situation for Sam, who can’t be sure she’s found an ally in the other girl.

More comedy than horror film, Satanic Panic struggles with its footing with excessive writing that gives characters too much to say, leaving the film without a proper mood. It becomes an incredibly chatty film that thinks it’s much cleverer and kitschy than it actually is, but I’m not surprised, as it was written by flavor of the year author Grady Hendrix of My Best Friend’s Exorcism and the knowledgeable reference guide Paperbacks From Hell, which chronicles the fun history of pulp horror novels of the ’70s, ’80s, and ’90s. Hendrix has a long way to go to prove himself a formidable screenwriter, though, as Satanic Panic is a much better concept (story is by filmmaker Ted Geogheagan) than it is a film, but perhaps director Chelsea Stardust relied too much on a weak script to deliver a product that should have had a greater crossover appeal. Similar to Netflix’s nominal, middle-of-the-road concept film The Babysitter, this one fails to conjure a hell of a good time.

RLJE Films will release the horror film SATANIC PANIC in Theaters, On Demand and Digital on September 6, 2019.