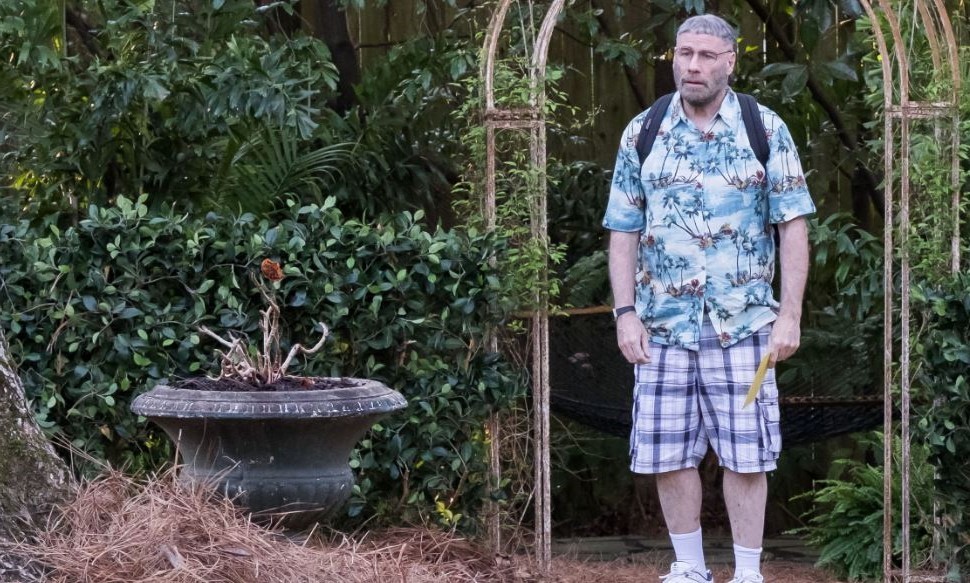 John Travolta turns in one of the strangest performances of his career in a film destined to be embraced by lovers of “so bad it’s good” cinema.

Plot: A rabid film fan stalks his favorite movie star and things quickly get out of hand.

Review: We have more access to celebrities than ever before in history. Previously, it was limited to the products they produced, what their public relations firms wanted us to know about them, and whatever pictures unscrupulous paparazzi would sell to the press. Times have changed though, the rise of social media platforms like Twitter, have given us uncomfortable levels of access to the thoughts and lives of celebrities.

Because we have the ability to know so much about a famous person now, it’s easy to see why some fans may feel they have a deep, personal connection with them. It’s all one-sided though. Just because you can know all the commonalities between yourself and a celebrity you admire does not mean you could or should be friends. Think about that from the famous person’s perspective for a moment. How unnerving would it be to have people you’ve never met, admiring you to the point where they think you’d be best friends if they only had a chance to meet you?

That sense of unease is at the core of musician-turned-filmmaker Fred Durst’s new film, THE FANATIC; the film finds a successful, B-movie actor, played by Devon Sawa (FINAL DESTINATION), being stalked by an obsessive fan, played by John Travolta (GOTTI), after an awkward altercation at an autograph signing.

John Travolta’s career has taken a downturn in the last few years as he has been appearing in more DTV films than widespread theatrical releases. With that in mind, it is hard to not see the effort he puts into his performance, as the titular character, as trying to showcase his diverse acting ability.  The character he plays, inexplicably named “Moose”, is autistic and emotionally stunted. Travolta, at times, brings a surprising sense of honesty to the role. For example, in the scene where Moose is waiting in line to initially meet Sawa’s character (the also-weirdly-named “Hunter Dunbar”), he seems almost overwhelmed with nerves and excitement. Little endearing moments like that are sprinkled throughout THE FANATIC. More often than not though, those moments are completely undermined by Travolta going so over the top with his performance, so much so that it feels like an intentional parody. This is not the worst performance of his career, but it may be the most misguided.  Travolta’s work here will be revered by people who champion ironic cinema, like Tommy Wiseau’s THE ROOM, but everyone else will either be appalled at the way autism is portrayed or just confused by the strange choices on display.

Not all the blame for the film’s problems can be placed on Travolta though. The lion’s share of the fault lies with Durst’s script, which he co-wrote with first-timer Dave Bekerman. Durst has stated in interviews that he came up with the idea for the film after dealing with obsessed fans during his time touring with the band “Limp Bizkit”  and it’s clear that Durst still carries negative feelings about those interactions, as any positive qualities that Travolta tries to the add to the character are not supported by the writing.  Moose is written to always be in the wrong with his interactions with Hunter Dunbar. He is too pushy and ignores clear boundaries at every moment destroying any goodwill he may have with the audience. Durst’s script clearly wants us to side with the celebrity and see Moose as annoying at best and dangerous at worst. This is in direct conflict with Travolta’s obviously sympathetic view of Moose. Those diametrically opposed outlooks on the material may explain why Travolta’s performance is so all over the place. The viewpoint of the film is further muddled by the narration of Leah, played by Ana Golja (DEGRASSI: THE NEW CLASS). Leah is Moose’s closest friend in the film and her voice over also paints Moose sympathetically. Which leaves it feeling out of place, even though it is well delivered by Golja. When the film itself cannot decide how to feel about the character at its center, how can it expect anything but indifference or confusion from the audience?

Devon Sawa fairs much better as he is given numerous scenes where he can react naturally (well mostly anyway) to the bizarre circumstances around him. He gives a strong performance as someone just trying to hold his life together. He’s attempting to move on from a divorce and keep a healthy relationship with his son when Moose comes barreling into his life. It’s a shame that Sawa’s performance will likely get overshadowed by all the other more extreme aspects of the film.

The only real tone-deaf moment Sawa has on his own is, unfortunately, a very memorable one. He shares a scene with his son, that has no bearing on the plot, where his character actually talks about his love of Limp Bizkit’s music. I sat staring at the screen in disbelief when it happened. The moment is a level of vanity that is almost incomprehensible, and it never should have made it into the completed film.  If Durst wants to be taken seriously as a filmmaker that is not the way to go about it.

From the trailer alone, it’s easy to tell that THE FANATIC goes to some very dark places by its end. We’ve seen these dark moments before in other similar thrillers, but none of it really works here. The film wants us to buy into an incredibly poorly thought out final act that is not only needlessly gory and cruel but is also out of place with all the actions of the characters before that moment in the story. It all culminates in a twist ending so far-fetched it just made me shake my head and laugh as it played out in front of me.

THE FANATIC will almost certainly be a film that leaves people talking, but I suspect it won’t be for the reasons the filmmakers intended. It is an incredibly conflicted movie, filled with bizarre choices that are begging to be mocked, that has no real idea of what its viewpoint is or what it’s trying to say. Lovers of bad films or “midnight movies” will have a lot to look forward to, though, as THE FANATIC just screams to be seen late at night, in a packed theater with a drunken crowd, their expectations lowered and in a mood to laugh at, or maybe with, the crazy events unfolding on screen.