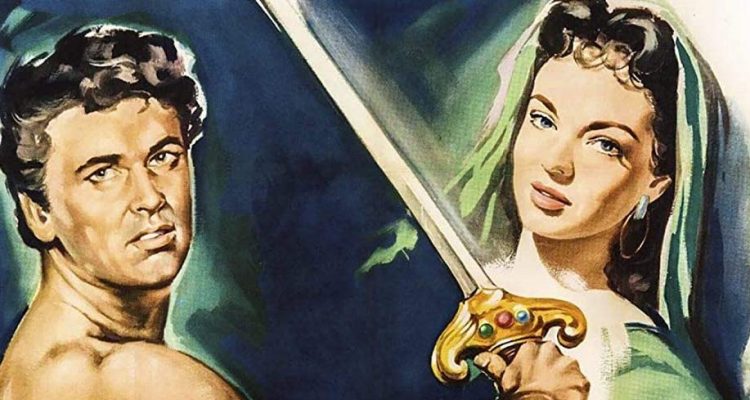 These are three enjoyable “action” films, starring one of the cinema’s most adored leading men from the ’50’s and ’60s. The Blu-rays looks great, and the set is very affordable.

A commoner on a journey finds a legendary, magical sword that puts him at the center of a prophecy.

A man named Harun (Rock Hudson) travels to Bagdad where he intends on seeking an audience with the Grand Vizier to help establish peace in his land, but along the way, he stops at the street market to buy some clothes and wares, and ends up quite by accident purchasing an ancient, magical sword from Damascus that is attached to a prophecy. Unbeknownst to Harun, Harun becomes the catalyst for the downfall of an empire, and the fulfillment of the prophecy will have him going through a number of trails somewhat like the ones King Arthur must go through when he draws Excalibur from the stone. A wayward, free-willed princess (are there any that aren’t?) named Khairuzan (Piper Laurie, a little spitfire in her time) crosses paths with Harun, and she realizes before anyone else that he and his sword are going to not only liberate her from the Caliph’s evil vizier Jafar (George Macready), but also that he will be the man she marries, despite the fact that he’s a commoner. Jousts, sword fights, swinging from chandeliers in castles, and harem hijinks ensue.

A fairly simplistic Islamic fantasy adventure filtered through whitewashed 1950’s Hollywood mispronunciations, The Golden Blade is fun, but limits its fantastical elements to only the sword, which seems inspired by Excalibur. You can’t get any more Wonder Bread than Hudson and Laurie, but I liked them both in this swashbuckling frolic. From Nathan Juran, who also directed Jack the Giant Killer.

For disobeying orders while in battle, a Captain is reprimanded, and as a result, he ends up joining the opposing side, which makes his alliances complicated.

Set in 1857 British-ruled India, Bengal Brigade starts in the middle of a battle where the British soldiers are sure to be annihilated by the natives in a bloody battle. A Captain named Claybourne (Rock Hudson) is given orders that will only make the battle worse for the British, and so he disobeys, and leads his men directly into a siege that ends in victory, but as a result he’s court martialled and he resigns from his position. His engagement to his fiancé (played by Arlene Dahl) is ruined, and his life as a soldier seems over … until his enemy, an anti-colonialist maharaja, recruits him to a high position on his army to fight his own former battalion. Deemed a traitor by his former soldiers and commanders, Claybourne is between a rock and a hard place and can’t fit into either army any longer, and so he must make a critical choice when war heats up again. Should he stay with the maharaja, who despises him, or should he try to help his former mates and country that turned their back on him?

An interesting take on a subject I know very little about, but should, Bengal Brigade sees star Hudson in a vulnerable heroic role, and the film feels authentic with fascinating tidbits about how the British treated the Indians, and there’s a whole subplot about how the ammunition was dipped in cow’s oil, which was blasphemous to the Indians, as they worship cows. I enjoyed this one, and it is well worth watching, and at only 87 minutes it moves briskly. From director Laslo Benedek.

During a court marshal, an Army officer recounts to the court the events that led up to the murder of a Seminole chief who was standing in the way of the United States Army of forcefully claiming sacred land.

Army Officer Lance Caldwell (Rock Hudson) stands accused of murder from a military court, and he testifies on his own behalf the events leading up to the killing of a petty officer and a Seminole chief (played by Anthony Quinn) who arrived at a fort under a banner of peace to discuss terms of relinquishing sacred land to the US military. We learn that Caldwell was insubordinate to his commanding officer, a self-righteous prick that was only too eager to murder Native Americans when it served his advancement up the military chain. Sensing that his commanding officer was over zealous and petulant, Caldwell warned that a trek through the swamps to ambush the Seminole tribe that was the last holdout of Natives against the US military would prove to be a disaster for the soldiers. When Caldwell’s warning goes unheeded, the Seminoles decimate the troop in a clever trap, and Caldwell’s commanding officer only becomes more incessant that treachery and murder against the Seminole’s take priority. After being confined to his quarters for insubordination, Caldwell garners the sympathy of both his entire troop and the Natives, for they see that he’s the most honorable man in the group. After a guard and the Seminole chief are murdered, Caldwell is blamed for the crimes, leading to a few last-second revelations when the Seminole’s lay siege to the fort.

Strikingly similar in almost every way to Rock Hudson’s previous military film Bengal Brigade, Seminole simply switches the proceedings away from India to Native-occupied America, with strapping and heroic looking Hudson in virtually the same role, right down to the court marshal, with a little romance on the side. I enjoyed both films, but when seen side-by-side, you can’t help but notice the similarities. This one was directed by Budd Boetticher, and was filmed in glorious Technicolor.

Kino Lorber’s three-disc “Rock Hudson Collection” has just arrived on Blu-ray in a nice boxed set. Each disc comes with an audio commentary by a selected film historian, plus trailers.