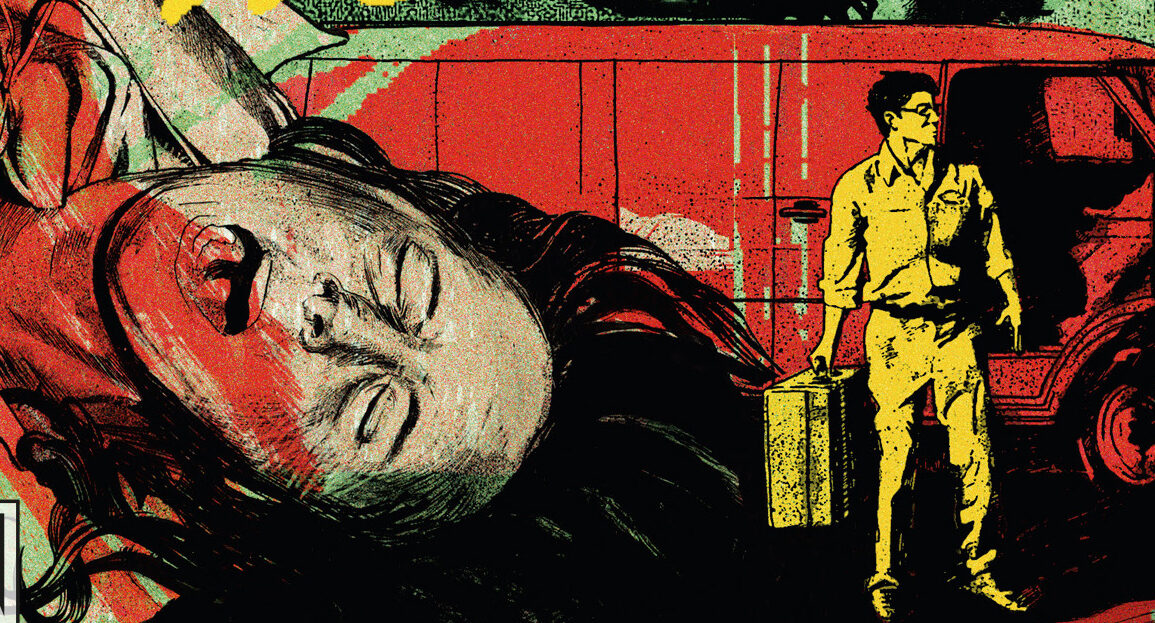 Produced and directed by exploitationer Irvin Berwick (Malibu High, another sleazy grindhouse film), this one is not always an “easy” watch due to its grim subject matter, but it’s a fascinating little picture, and it’s worth seeing for fans of grungy ’70s cinema.

Howard is a mild-mannered momma’s boy whose job running deliveries for a cleaning agency affords him a lot of time out on the road. It’s not until he picks up young women who’ve run away from home that he transforms into a twitching, homicidal maniac, hellbent on meting out punishment for their “transgressions”.

Crescent City, a Northern California town on the way to San Francisco, is home to a string of shocking murders that at first seem random, but all turn out to be connected: Each victim is a teenaged hitchhiker running away from home. We know right from the start that the killer is a bespectacled and meek dry cleaning deliveryman named Howard (indelibly played by Robert Gribbin), a clean-cut gentleman who lives with his mother. We don’t know exactly how long Howard has been at his ugly work. We do know, however, that his trigger is any mention from his victims that they hate their mothers: He gets twitchy and finds himself in a zone where rape and murder is literally his only option. He’s not an efficient killer, per se: Each victim is strangled one way or another (sometimes with a curled up hanger from the delivery truck he drives around all day), and he haphazardly dumps the bodies on the sides of roads or in dumpsters, whichever is handiest. Soon, his work performance suffers from his distractions, and he’s given reprimands from his boss, and Howard has no idea whatsoever that two world-weary Crescent City detectives are hunting for him. When the mother of an eleven year-old girl comes calling on the detectives to find her little girl after running away from home, the detectives know that they have to beat the clock before the killer out there finds her, picks her up, and turns her into his next unfortunate victim…

A beguilingly strange and uniquely affecting serial killer film under the guise of a grindhouse romp, Hitchhike to Hell works as a character study of an oddball killer, while also having a weird, off-kilter and perhaps unintentional sense of humor. It’s almost like a “how-to” instructional or educational video for teenagers to watch at school to warn against hitchhiking, but it plays out somewhat like a riff on Hitchcock’s Psycho, but without the style or nuance. Its biggest and most valuable asset is how the killer is portrayed, and star Gribbin knocks it right out of the park with a keen performance that will either win you or lose you in the first few minutes of the movie. He plays someone who’s completely crazy, but you can’t help but watch and be invested in how he does it. Produced and directed by exploitationer Irvin Berwick (Malibu High, another sleazy grindhouse film), this one is not always an “easy” watch due to its grim subject matter, but it’s a fascinating little picture, and it’s worth seeing for fans of grungy ’70s cinema.

Arrow Films recently released a Blu-ray edition of Hitchhike to Hell, and it looks appropriately clear and filmic in a new 2K restoration. At times it feels like you’re watching the movie straight from its original theatrical release. It comes in two aspect rations (1:33:1 and 1:78:1), plus a bunch of new special features, a reversible sleeve, and an insert booklet with an essay written by film historian Heather Drain.